“From freshman year on, I would do Columbia by day and improv by night. All night, every night of the week. ”
Aidy Bryant

The "Shrill" star remembers her formative years in Chicago.

Aidy Bryant ’09 has a framed map of the Chicago Transit Authority hanging in her New York City living room. It’s an official map, ripped from a train by her Chicago-native husband when he was a teenager. (“Bad boy,” she says.) This contraband souvenir serves as a fitting reminder of the years that shaped her, from enrolling at Columbia College Chicago to performing on the Second City stage.

Before she was a repertory player on Saturday Night Live (SNL); before she wrote and starred in her own Hulu comedy Shrill (based on Lindy West’s memoir of the same name), Bryant was a Columbia Comedy Studies student performing at comedy clubs every night of the week. From 2005 to 2012, Bryant called Chicago home—and built the foundations of her comedy career while earning her degree.

After a year in the University Center dorms, Bryant tried out a few North Side neighborhoods, from Andersonville to a stint on Clark Street in the heart of Wrigleyville. (She recalls, “a lot of peeing and puking men around my apartment—I was like, ‘I think I gotta get outta here.’”) She ended up settling in Lincoln Square, living with roommates in apartments off of Montrose and Western avenues. “That’s my damn neighborhood,” she says. “One hundred percent, that’s where I spent most of my years.”

At the same time, Bryant performed incessantly at the city’s top comedy clubs like iO Chicago and the Annoyance Theatre. “From freshman year on, I would do Columbia by day and improv by night. All night, every night of the week,” she says. She even met her future husband, fellow comedian Connor O’Malley, when they performed together at the Annoyance Theatre.

On the side, Bryant paid her rent by babysitting and working at a barbershop on Southport. “I answered phones and folded towels and swept up hair,” she says. “I worked there for most of my time at Columbia.” In 2009, she graduated and left the barbershop to tour the Midwest with comedy group Baby Wants Candy, where she took part in an original, improvised musical in every single show. “I was doing shows in Indiana and Ohio, in a van with like five other improvisers, and then driving back to Chicago,” she says.

Her work with Baby Wants Candy caught the eye of legendary Chicago comedy club The Second City. In 2009, Bryant was hired by The Second City, the place that launched the careers of Tina Fey, Stephen Colbert, Amy Poehler, and countless others. While writing and performing her second show there, Bryant got big news one day: SNL creator and executive producer Lorne Michaels would be in the audience for that night’s performance.

“Thankfully, the people at Second City told us [Lorne was there], because you do a lot of audience participation,” she says. “It would be bone-chilling to go out there and be like, ‘Sir, do you have a suggestion?’ and oh my God, it’s Lorne Michaels.”

That performance led to an SNL audition, which led to a follow-up audition. In 2012, at 25 years old, Bryant was cast as a featured player on SNL. She’s been in New York City ever since.

At SNL, Bryant made her name with characters like Morgan, the awkward teen co-host of Girlfriends Talk Show, and Li’l Baby Aidy, her brash hip-hop alter ego. Now, she’s celebrating her biggest project yet: writing, producing, and starring in Hulu’s Shrill, which dropped in March 2019. Season one’s six episodes follow budding Portland, Oregon, journalist Annie as she battles her fatphobic editor, dances joyously at a body positive pool party, and learns to take up space unapologetically.

While she films SNL in New York City and Shrill in Los Angeles, Bryant continues to draw on her time in Chicago, where she worked on improv stages seven nights a week, hustling toward her career to come. “It was certainly where I found my comedic voice, which was very fortifying for getting to a place like SNL or going through something like writing my own show for Hulu,” she says. “I knew my comedic voice, and it’s really all thanks to my time in Chicago.”

Aidy takes us on a tour of her formative Chicago spots... 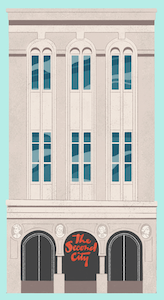 “Where I spent my last two years in Chicago, nearly every day. I got to write two shows on the e.t.c. stage, and that’s where Lorne Michaels and the SNL producers first saw me.”

“This was my post-Second City shows spot. Open until 4 a.m., and very late at night, someone would come in selling tamales ... and as a drunk person, those were helpful to me.”

“My absolute favorite vegetarian spot. I still always go for the Green Meanie sandwich when I’m back in town.”

“Where I learned to write, met my husband, and did some of my favorite shows. Highly recommend. Holy Fuck is a favorite show of mine that still runs today.”

“My beloved Lincoln Square apothecary. I want to live in this store. Established in 1875 and filled with all kinds of lovely and vaguely old-timey soaps, lotions, and remedies.”

“This was my go-to, number one, ultimate favorite locally owned grocery store. I lived with four roommates nearby and we would go here and truly buy enough food for an army.”

“My favorite movie theater in the city. I used to work down the street at the barbershop and would treat myself to a movie after."

Pick Me Up Cafe

"There were a few years where I lived off their hummus plate. They are open laaaaate, so this was my spot for some midnight fries."

“This is one of my favorite vintage stores. I still wear some of the jackets I bought here. Fun fact: I was here when I got the call that SNL wanted me to fly to NYC to audition."