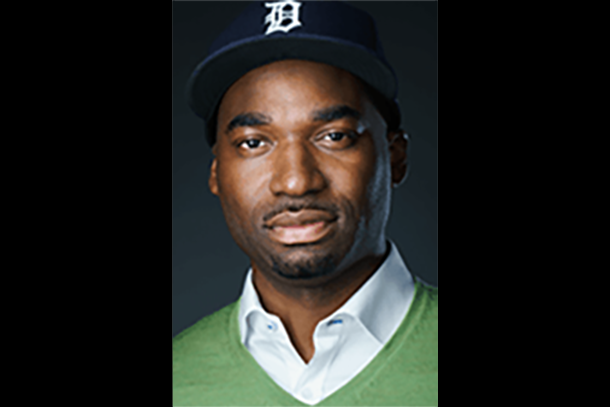 “The idea of getting to one day work in Hollywood was so exciting to me that I could spend hours and hours working toward that goal. That kind of hunger doesn't really go away.”
Bryan Smiley

At Columbia Pictures, Bryan Smiley gets movies made.

Bryan Smiley ’09 wears a Detroit Tigers hat every day. It’s a reminder of his time growing up in Detroit, creating documentaries about homelessness, single-parent homes, and the culture of American barbershops, as he dreamed of making it in the movie business.

Today, that Tigers hat serves another purpose: It helps Smiley stick in people’s minds as he moves between Hollywood meetings in his job as vice president of production at Columbia Pictures. In broad strokes, Smiley decides which movies get made. He reviews projects, brokers deals, builds partnerships, and ultimately, develops movies.

These projects include a five-picture deal with Insecure’s Issa Rae, which will support and spotlight five up-and-coming writers. Smiley also made headlines for brokering a deal with NBA star Steph Curry, developing films and television for Curry’s company Unanimous Media—the largest athlete media deal in history.

Smiley came to Los Angeles through Columbia College Chicago's Semester in LA program, and immediately saw that in Hollywood, networking is everything. He spent eight years moving up the ladder at Regency Entertainment—from humble beginnings as an assistant to Regency’s owner to a stint in home entertainment, marketing and distributing DVDs and digital videos. At the end of his time at Regency, Smiley ran new business development, where he focused on creating new revenue streams around film and television.

Through it all, he built and maintained industry connections—including with Columbia Pictures president Stanford Panitch. “He’s someone I knew for 14 years, speaking of networking,” says Smiley. “It’s very important to maintain relationships, and this is one that definitely led to my current opportunity.”

Smiley can’t discuss everything he’s working on, but the two projects he can talk about show a wide range. One is Once Upon a One More Time, a feminist musical set to Britney Spears hits. The other is a yet-to-be-titled action movie in the vein of John Wick. With every project, Smiley asks a simple question before jumping in: Is this a movie he’d want to see? “If the answer is yes, we put a lot of time and work to get it off the ground,” he says.

But Smiley remembers his roots—and he’s constantly encouraging Hollywood newcomers. Joining Columbia’s National Alumni Board put him in touch with students who have the same filmmaking fire that fueled him as a teenager. “I’ve met incredible students and hopefully helped people see a path for themselves in Hollywood,” he says.

At the same time, Smiley’s ambitions continue to spur him on—just like when he was a highschooler making documentaries in his hometown. “It’s a business of believing in hope and really believing you can accomplish the impossible,” he says. “That’s really what the movie business is—it’s an impossible task, it’s really hard, but you’ve got to have faith that you’re going to succeed.”