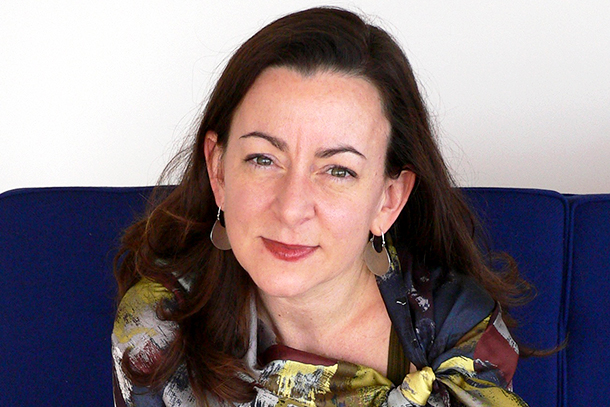 “We’re interested in trying to reclaim and re-contextualize the work of African American photographers that has been forgotten and is no longer part of our canon and contemporary consciousness.”

Associate Professor Amy Mooney is an in-demand scholar. An expert on African American portraiture art, Mooney was recently named the American Art Visiting Professor at the University of Oxford and a visiting fellow at Worcestor University. Here are her thoughts on some of the scholarly projects that have earned her such coveted appointments.

In 2019, Mooney contributed her expertise to Say It With Pictures, an ongoing collaborative research project that aims to educate the public on African American commercial photography in Chicago from the 1890s to the 1930s.

“We’re interested in trying to reclaim and re-contextualize the work of African American photographers that has been forgotten and is no longer part of our canon and contemporary consciousness.”

Mooney assisted in the curation of Archibald Motley: Jazz Age Modernist, a widely publicized 2015 exhibit that featured hundreds of paintings by the Harlem Renaissance master Archibald Motley. Mooney is considered one of the foremost scholars of Motley’s work.

“I [find Motley’s painting] so challenging in terms of our own expectations—especially in regards to women, gender, and race. For me, [he] is certainly a topic of passion because of the artwork itself, but also because of the social values and the ways he is civically engaged.”

Mooney helped organize 2014’s RISK: Empathy, Art, and Practice, an exhibit that examined “social practice” in Chicago, a national movement to create art in and for local communities.

“Too often, community members are asked to participate in such projects, but rarely consulted in the formation of objectives and structures. It is for this reason that several of the artists in RISK generate platforms that can be utilized by the community, projecting the artists’ concern for their interests into the public realm.”