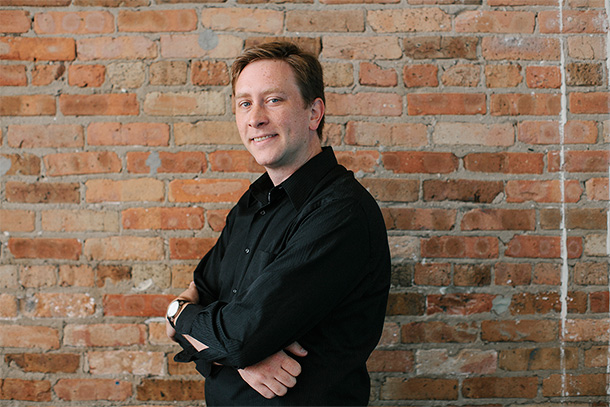 “Columbia students have an artistic temperament unlike anywhere else.”

The associate professor of English considered becoming a librarian before coming to Columbia and developing a course about zombies that’s received national attention.

When a zombie outbreak finally comes, associate professor Brendan Riley says his preferred weapon of defense against the dead would be simple: a crowbar. “All bludgeoning weapons are most useful,” Riley says. “But if you’re at the point where you have to kill zombies, you’re probably already dead.”

The English professor is most known at Columbia College Chicago for his class Zombies in Popular Media, a three-week, three-credit course offered during the J-terms. The class has received national media attention, and Riley has presented widely on the subject.

The Study of Zombies

Much of the material in Zombies in Popular Media revolves around philosophical, historical, and theoretical perspectives on the zombie figure. Riley asks his students to analyze and discover the underlying questions that zombie movies and books address, such as how people relate to one another, how to trust people in times of need, and what zombies can teach us about being human.

“I want my students to leave the class being able to say that this piece of zombie media helps them understand the world in different ways,” Riley says. The professor notes that he considered becoming a librarian before his sophomore year of college, when he started envying a film studies professor because he was teaching a class that Riley loved—and getting paid for it.

In addition to teaching English courses at Columbia (he also teaches Literary Genres: Detective Fiction and Rhetoric of Digital Media, among others), Riley is the executive director of operations at the Popular Culture Association/American Culture Association, a scholarly group that holds an annual, four-day conference covering more than 110 areas of popular culture. He co-organizes the event, which draws scholars from around the world, and he helps maintain connections among the group members throughout the year.

Having taught at Columbia since 2004, Riley says he is most happy when he is redesigning his course material in new ways in order to engage every student in the classroom, no matter their major. “Columbia students have an artistic temperament unlike anywhere else,” he says. “They’re willing to engage with unusual assignments, and they bring creative work and ideas to class.”

Visit the School of Liberal Arts and Sciences YouTube channel to watch Riley present “People, Zombies, and the Blurry Line Between Them.” The talk was part of the Honors Program discussion series, What’s the Big Idea?