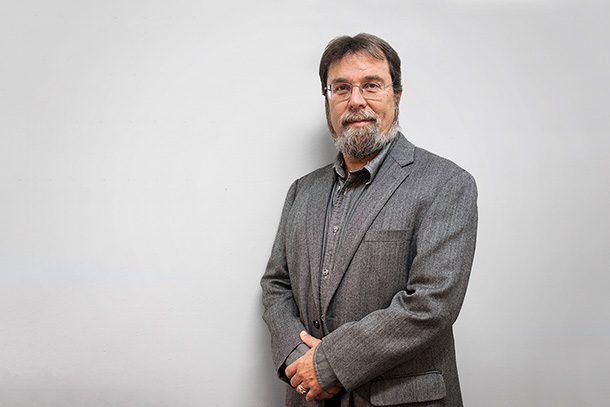 “The thing about stage combat is, it’s about taking care of your scene partners rather than being aggressive.”

As associate professor of the Stage Combat program in Columbia’s Theatre Department, David Woolley teaches students how to act out violence in theatre and film, specializing in Renaissance and medieval swordplay and contemporary violence.

“The thing about stage combat is, it’s about taking care of your scene partners rather than being aggressive,” Woolley says.

Fighting for a Living

Woolley came to Columbia in 1986 and choreographs all the fights for the Mainstage shows at the college. The violence he stages ranges anywhere from a small slap or push to an intense battle scene or domestic abuse. Woolley says routine exposure to cinematic violence has caused the “violence requirements” of live theatre to become a little more intense.

“Audiences are spoiled by movies and expect a certain level of violence to happen,” he says. “They want to be titillated by it.”

Woolley fell into stage combat while studying acting at DePaul University in the late 1970s.

“I discovered I was pretty good at it, and people were letting me do it,” he says.

After graduating in 1981, Woolley began acting in a show that happened to need a fight director. Deciding to take on the position for the program credit, he choreographed the fighting for the show while keeping his performing role. From that point on, he was requested more as a stage combat director than an actor.

But he still performs. In 1989, he created the comedic, swashbuckling duo Dirk and Guido the Swordsmen, an act he still performs to this day. Woolley travels the country performing in vaudeville houses and Renaissance fairs 22 weeks out of the year.

One of Woolley’s most memorable moments was back in 2009 when he performed and designed the choreography in the play The Elaborate Entrance of Chad Deity. The show, and Woolley himself, won a Jeff Award, and he went on to perform the show in New York and Los Angeles. (Woolley won another Jeff Award for fight choreography—his third—in 2014.)

For now, Woolley says, he’s up for doing anything with Columbia or his traveling comedy show, but doesn’t have much time for outside productions anymore.

“I’m swordfighting for a living, so I can’t complain,” he says.