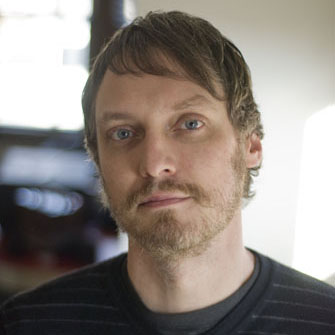 Justin Sinkovich is an associate professor and the Graduate Program Director of the Master of Arts Management (MAM) in the Business and Entrepreneurship Department. He is currently teaching Business of Media, New Media Strategies (graduate), Self Management and Freelancing, and AEMMP Digital Distribution and Promotion Agency: Practicum.

Justin grew up in Nashville TN, working summer jobs in the music industry and playing in bands.  While earning his bachelor’s degree in business from the University of Tennessee, Knoxville, he started touring as a musician, releasing albums, promoting concerts, and helping run a small independent record label, File 13 Records, with his band mates.

After graduation he started Landspeed Records, a record store and music venue in Knoxville that won “Best New Business” of the year in the local weekly paper, Metro Pulse.  Justin accepted a sales and marketing position at Metro Pulse soon after.

Justin then co-founded Epitonic.com that won a Webby Award for its contribution to online music discovery.   Epitonic was acquired by Palm Pictures where Justin co-managed Epitonic and contributed to many music, film, and animation projects.

Justin later started betterPropaganda.com, and became the manager of File 13 Records.  During this time he earned his Masters of Arts Management degree at Columbia College Chicago.

After earning his masters, Justin became New Media Manager at Touch and Go Records.  This position oversaw the company’s digital distribution and promotion division which represented labels like Kill Rock Stars, Jade Tree, and Touch and Go and artists including The Decemberists, The National, Sufjan Stevens, The Swell Season, and TV on the Radio.

While working at Touch and Go, he began teaching at Columbia part-time and became full-time at in 2009.  He remains an active entrepreneur, consultant, producer, and musician.

See all Business and Entrepreneurship faculty