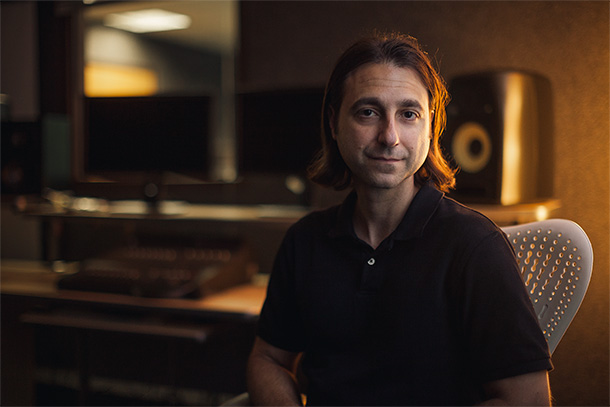 Business and Entrepreneurship associate professor Jerry Brindisi went from performing in bands to managing them.

If anyone knows about continual education, it’s Brindisi. He started out performing in bands, but ended up managing and booking them (on top of still singing). He took classes in audio production, and eventually went to New York University to earn his master’s in music business.

On the production foodchain:
Brindisi had a five-year stint as a digital analyst at pop/rock label Sony Music Entertainment after working for Anders Music, Inc. (AMI) in the early 2000s—the production powerhouse that’s written songs for Miley Cyrus, Sheryl Crow, even the Backstreet Boys back in the day. Brindisi was fascinated with all the ways the pieces of the music industry puzzle came together at AMI.

“A lot of people look to those artists as the be-all, the top, the super famous, yet it was interesting to see how those people [depended on] the songwriters and the producers,” he says. “In the food chain, I felt like the songwriters were really at the top.”

“Like any business, there are going to be some negative people, some people that maybe are only in it for the money,” he says. “I don’t think that’s all the music industry is.”

At least, that’s certainly not what he finds in his music business students. Brindisi teaches both entry-level and advanced classes, as well as coordinating the Music Business program, overseeing the Curriculum Committee, and teaching in Germany for a week every February. (Not surprisingly, he laughs at the idea of free time.) Fall 2014 marked the beginning of an exchange program with the Popakademie in Mannheim, Germany, allowing music business students to study in the country’s first popular music and music management program.

“We have a lot of really amazing, practical, hands-on opportunities for students,” Brindisi says of Columbia—such as AEMMP, the school’s record label and talent agency, which takes an annual trip to SXSW, the music, film, and interactive media festival in Austin, Texas. “[I’m] privileged to see all the wonderful things that our students are doing: amazing shows, releasing music, securing publishing and licensing for artists, signing record deals. You’re constantly surrounded by creatives.”