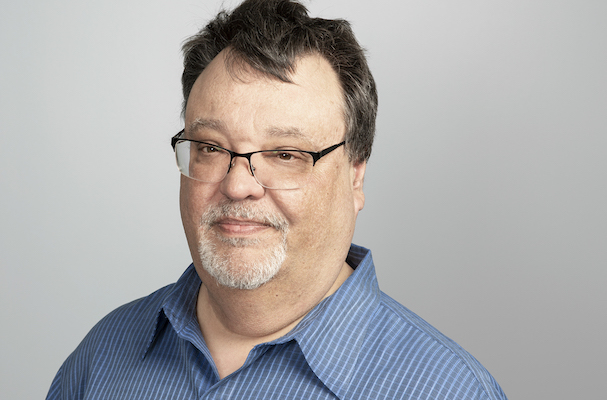 “The critic doesn’t sit there to tell you everything you think is wrong; he or she just wants to start a conversation.”

The groundbreaking music critic and journalist teaches students to become sharper writers and continues his decades-long reporting on the R. Kelly saga.

Jim DeRogatis is yelling—which means he’s excited. Getting worked up has become something of his trademark. Over the last three decades, the music critic and journalist has made his living sharing his sonic views and covering music news for Chicago Sun-Times, Spin, Guitar World, GQ, The New Yorker, and WBEZ public radio. Whether he’s dissing sacred cows like Bruce Springsteen or praising the decidedly uncool Meat Loaf, he’s got an opinion and isn’t afraid to defend it—or offend you. In fact, he loves it when others disagree with him—which serves him well as an associate professor at Columbia College Chicago, where he teaches courses in cultural criticism.

“[Students will say] ‘I read what you wrote about Migos—you don’t know what you’re talking about!’” DeRogatis says. “‘[I’ll say] let’s talk about it! What do you mean?’ The critic doesn’t sit there to tell you everything you think is wrong; he or she just wants to start a conversation.”

It’s a lesson he learned more than 35 years ago from his childhood hero, rock critic Lester Bangs. As an aspiring high school journalist, DeRogatis spent a day with the notoriously eccentric writer. “I had all my questions on a notepad, and he kept swatting them aside. [He said] ‘What are you listening to? Who are you reading? What do you think?’ It was a conversation, and it was hugely inspiring. That day changed my life, and two weeks later he was dead. What I’m doing at Columbia—and this sounds ridiculously cheesy—is, I’m paying that back.”

At Columbia, DeRogatis teaches Reviewing the Arts, Cultural Criticism and the Arts, Journalism as Literature, and Music and Media in Chicago. He encourages his students to question everything because that will make them better cultural critics and better writers—no matter what their career path.

“I know nothing about fashion, and when [fashion students] can write a review that makes me understand Alexander McQueen—that is a blessing,” he says. “You’re going to pitch that gallery to show your photos. You’re going to have to try to get three million out of somebody to make your movie. … I’ve got every major, every discipline—every artistic pursuit we have at Columbia, I teach. And to one degree or another, they’re all going to have to learn how to write.”

Raised in Jersey City, New Jersey, by a widowed mother, DeRogatis has forged a long, varied, and sometimes controversial career as a journalist. His brief stint as a Rolling Stone senior editor in the 1990s ended when DeRogatis criticized publisher Jann Wenner’s decision to replace his negative review of Hootie and the Blowfish with a favorable one—an incident DeRogatis calls “Hootiegate.” He has written several books about rock music, including Let It Blurt: The Life and Times of Lester Bangs, America’s Greatest Rock Critic. And with the Chicago Tribune’s rock critic Greg Kot, he co-hosts Sound Opinions, a weekly rock ‘n’ roll talk show that airs on more than 100 public radio stations.

But it was at the Chicago Sun-Times, where he served as the newspaper’s pop music critic for 15 years, that DeRogatis found himself with the most challenging—and enduring—assignment of his career. An anonymous fax sent to DeRogatis in November 2000 stated that superstar R&B artist R. Kelly had a “problem” with young girls. DeRogatis and Abdon M. Pallasch broke the story in December 2000 that Kelly allegedly sexually abused underage girls. Over the last 18 years, DeRogatis has kept the story going, interviewing hundreds of people regarding the allegations and reporting 50-plus stories, including a July 2017 BuzzFeed article that went viral and led to increasingly more scrutiny of Kelly by the media, the record industry, and law enforcement. After the January 2019 broadcast of the Lifetime docuseries Surviving R. Kelly, which built on DeRogatis’ investigation, Kelly’s record label RCA and parent company Sony dropped the singer from their roster. On February 22, 2019, Kelly was indicted on 10 counts of aggravated criminal sexual abuse—a class 2 felony—in Cook County, Illinois.

As the saga continues, DeRogatis says he will continue to report on it. “You are not a journalist if you do not follow the story through to the end,” he says. “There’s been no end, so I haven’t been able to stop following this story.”