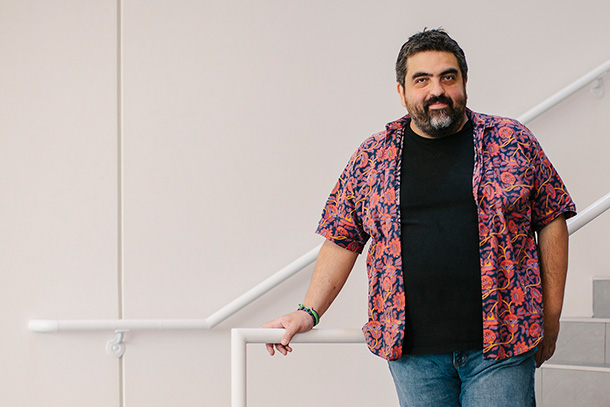 Luis Nasser convinces students that science has application in the arts—and that art can be a science.

At an art school like Columbia College Chicago, students can be skeptical of the sciences. But associate professor of Science and Mathematics Luis Nasser, who plays bass guitar in his free time, can easily show the creative applications of physics. If he’s playing a show, he can estimate the size of the venue, determine where feedback will occur, and make little tweaks that give him the best sound.

Growing up in Mexico, Nasser bought his first bass guitar at 18 years old (the instrument now hangs in his office, unplayable) and performed in clubs around Mexico City. Mexican bands mostly sang in Spanish, but he preferred shorter, simpler English words. Because of that, it was a constant struggle to find support from radio stations and clubs.

“It takes a very special kind of insanity to go through that and actually like it,” Nasser says. “I thought, ‘There has to be a joy to this, and if there isn’t, you’ve lost the plot.’”

So he shifted focus to his other interest, physics, which he had studied as an undergraduate. He moved to America and received a master’s degree in science writing from Johns Hopkins University and a doctorate in physics from the University of Maryland. He stayed in America largely out of convenience, teaching at both of his alma maters and at University of Illinois at Chicago.

Nasser says he was attracted to Columbia’s significantly smaller class sizes. At other institutions, he was lecturing to 150 students at a time.

At Columbia, he can get to know his students better and adjust his curriculum based on their interests. He even mentors some of them outside of class.

Aside from science’s creative applications, Nasser says the field is fascinating in and of itself. In high school, he had to choose between an art class and a physics class. He chose art, but the teacher wouldn’t let him register, urging him to take physics instead. That push changed the course of his life.

“It was great to discover that there’s a mathematical language that describes nature,” he says. “If you learn how to speak this language, then you can learn how nature operates. It was a very powerful epiphany.”