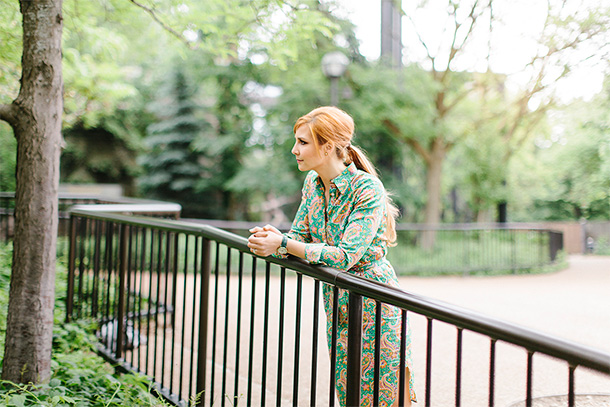 “Columbia students are so creative that they can think about these concepts in different ways. It completely inspires me.”

For many, a love of science begins in the classroom. For Michelle Rafacz, it all started after a chance meeting with a tortoise named Lonesome George.

Biology associate professor Michelle Rafacz, PhD, considered becoming a makeup artist before she discovered her true-calling trifecta: science, teaching, and the fecal odor cues in African wild dogs. And it all started after meeting a tortoise named Lonesome George.

Rafacz met the tortoise during a trip to the Galapagos Islands after her high school graduation, and the chance meeting instilled in her a love of science. “I found out this tortoise was the last of his kind, and it had me thinking that I had to save the species,” Rafacz says. “I thought maybe I could do this as a career and make a difference.”

In 2004, while pursing a PhD in biology at the University of Chicago, Rafacz started working at the Lincoln Park Zoo. She studied primates with a focus on parental behavior and related hormones in gibbons and siamangs. With the help of a grant from the National Science Foundation, Rafacz completed her PhD in 2010, then spent a year working full time at the Lincoln Park Zoo. In 2011, she joined the Department of Science and Mathematics at Columbia College Chicago as an assistant professor, and she remains an adjunct scientist at the zoo.

Rafacz finds the most fulfilling moments in the classroom happen when her students explain concepts out loud. “They explain things back in their own words and in ways that I’ve never even imagined,” she says. “It’s because Columbia students are so creative that they can think about these concepts in different ways. It completely inspires me.”

Rafacz often takes her classes on field trips to the Lincoln Park Zoo, not only to extend the learning into the city, but to give students a glimpse of her scholarly work.

Through Columbia, Rafacz received a faculty development grant in support of her research, on which she worked with Rachel Santymire, director of the Davee Center for Epidemiology and Endocrinology at the Lincoln Park Zoo, on the second phase of a study involving fecal odor cues in African wild dogs.

When she isn’t studying the fecal matter of animals, writing papers, or working on a new chocolate recipe (she’s a skilled chocolatier as well as a scientist), Rafacz is showing her students how relevant science can be in their studies and in their lives. In teaching classes such as Evolution of Sex and Animal Behavior, Rafacz wants her students to learn that science doesn’t have to be intimidating.

“I firmly believe that the learning that takes place outside of one’s major or focus area is usually where a lot of inspiration for one’s art or work comes from," Rafacz says. “I’ve absolutely learned that from my students.”