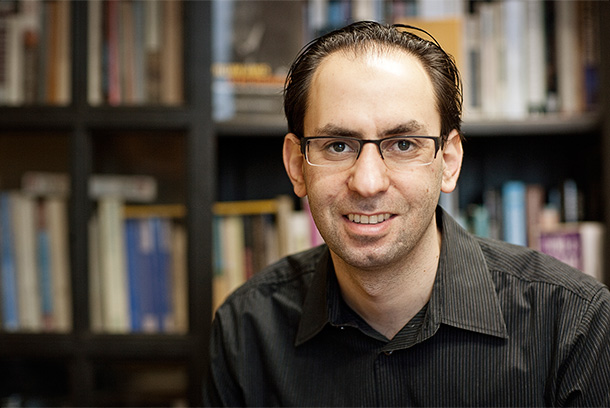 “I get to mix psychology, art, and philosophy. I get to talk about topics across disciplines.”

Rami Gabriel was finishing a PhD program in psychology in California when one of his friends told him about an assistant professor job opening at Columbia College Chicago. The application was due the next night, so Gabriel stayed up all night to complete it. At the time of his callback interview, Gabriel was on vacation in Japan. He boarded the next flight, and, in his words, “was up for the next couple of days trying to get to Chicago.” Gabriel eventually made his way to Columbia. Now an associate professor, he’s taught in the Humanities, History, and Social Sciences Department for over 10 years.

How do you engage with students at what’s primarily known as an arts college?

My courses are structured in a certain way. What I try to do with all my classes is show that each topic, whether it’s consciousness or self and identity, has multiple approaches. So there is the scientific approach, and I give them that approach in the beginning. And then I start to open it up, and start showing them that even these scientific or biological things have sources in cultural and social implications and influences.

What classes do you teach?

[One class I’ve taught is] called Sex, Death, and the Unconscious: Freud and His Legacy on 20th Century Arts. So this is a good example of how I can mix two sides. The first five weeks are all Freud—doing primary source reading of Freud himself, finding out what he meant by sex, death, and the unconscious. And the rest of the class I focus on each type in art. So I’ll do sex in film that was influenced by or is part of the legacy of Freud; I do poetry, literature, animation, popular culture. I show how psychologists of the 20th century strongly influenced the pop culture of the 20th century.

A colleague of yours mentioned you do a lot with music. Can you talk more about that?

I’m a professional musician. I’ve played in a variety of formats. I play classical Arabic music and Egyptian and Lebanese music. I play with a group that mixes Arabic music and jazz called Swing Hakim. I play the Middle Eastern lute, and I play the guitar.

The department is great. Everyone is so open and, as a scholar, I’ve been interested in many fields, not just psychology. I get to mix psychology, art, and philosophy. I get to talk about topics across disciplines. It’s great.