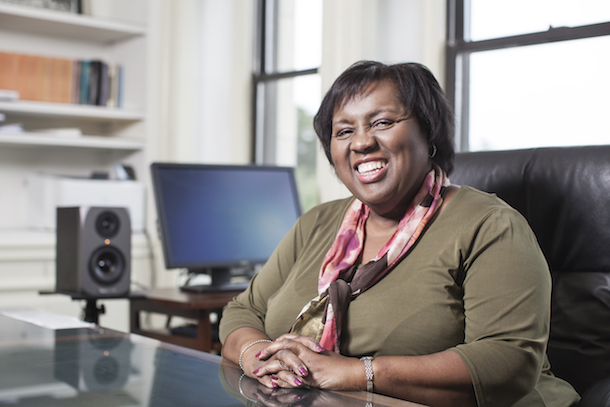 “I joined the orchestra as the only wind player and one of the few black students. In many ways, music saved me that year by easing my transition into [that] new environment.”

Rosita Sands has dedicated her livelihood to music and music education.

Rosita Sands has devoted her life to music. Growing up in a musical family, Sands began playing the piano as a child and later learned the clarinet. A college course in Afro-American music and ethnomusicology inspired Sands to write her doctoral dissertation on the educational influence and importance of Afro-American music. Sands came to Columbia College Chicago as the associate director of the Center for Black Music Research in 2000, and was chair of the Music department until her 2018 appointment as interim dean of the School of Fine and Performing Arts. She teaches music education with a focus on the black cultural origins of contemporary American music. She talked to us about how music has affected her throughout her life.

I come from a musical family. My mother was our church pianist, and I have been involved in music since beginning piano lessons as a child in Key West, Florida.

The year I was entering the sixth grade, my school was closed and all the students were dispersed to other schools as a result of the landmark Brown vs. the Board of Education Supreme Court decision. The white school I transferred to had a string orchestra, so when I showed up already knowing how to play the clarinet, I joined the orchestra as the only wind player and one of the few black students. In many ways, music saved me that year by easing my transition into [that] new environment.

It was during my senior year at Florida State University that I enrolled in an elective course on Afro-American music, which opened up the world of ethnomusicology to me. It was the first time that the body of music originated by African Americans was validated, and it became the inspiration for my [later] doctoral dissertation on “The Pedagogy of Afro-American Music.”

I’ve been at Columbia [since 2000]. I left the University of Massachusetts-Lowell to accept the offer to be an associate director of the Center for Black Music Research (CBMR). Later, I served as director for four years. I knew the CBMR because of its stellar international reputation as the preeminent source of information on the black musical experience. I see enormous potential and a myriad of possibilities for connecting the CBMR with Music faculty and students in ways that support curriculum, pedagogy, repertoire, and scholarship.