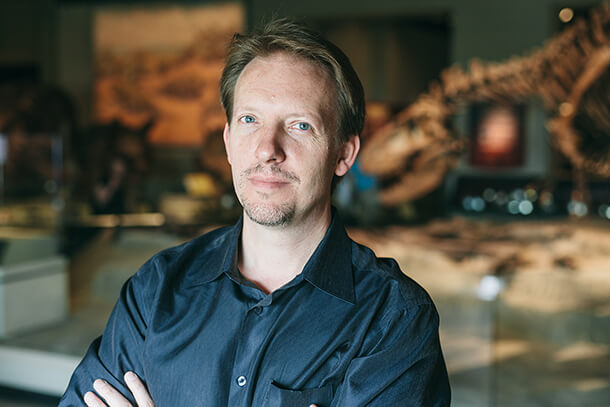 “The arts aren't separate from philosophy—they are a kind of philosophy, or a kind of spiritual practice.”

Stephen Asma brings out the philosophical side of his creative students.

By Margaret Smith and Megan Kirby

Stephen Asma is, by his own admission, a regular Joe Sixpack. The Humanities, History, and Social Sciences (HHSS) professor appreciates red meat, good whiskey, and baseball. His office, however, tells a slightly different story.

The calming sound of soft jazz regularly fills the room—a fine fit considering that, in the early ’90s, Asma was a professional musician in Chicago. Four brown bookcases offer selections of philosophy, Eastern religion, and other texts, including his own published books like On Monsters: An Unnatural History of Our Worst Fears (Oxford) and Why We Need Religion (Oxford).

The recipient of a Fulbright Award to teach in Beijing, China, in spring 2014, Asma discusses bringing out the philosophical side of his creative students.

Columbia is, first and foremost, an arts and media college. How do art students connect to philosophy?

I think there’s an interesting connection between art and philosophy, because students may not have studied philosophy formally but when they encounter it they feel sort of at home.

I’ve been teaching this course on Eastern philosophy, and there’s a lot of Eastern philosophy that tries to get in this zone where your mind and your body prepare to channel some activity like calligraphy, martial arts, playing music, or painting a landscape. For Buddhists and Daoists in particular, the arts aren’t separate from philosophy—they are a kind of philosophy, or a kind of spiritual practice. I think students really like this because it’s all about making the art an extension of themselves. It’s about getting in this state of flow.

You’re still active in the Chicago music scene. Does being an active artist help you as a professor?

As a musician you have to work with others. I think playing music in a group setting is really good for your social skills [and] group problem-solving. Staying active creatively keeps your improvisational skills honed. As a teacher, you need good improvisational skills because you really don’t know what is going to happen in the class. If you try to manage it too much, it ends up feeling very stifled. Plus, staying active creatively helps me think about where the students are at.

In many ways, some of them are traditionally very prepared and excellent at academics and scholarly work. But a lot of them aren’t. I think that’s something that’s unique at Columbia: They have skills that may not have advanced them at a traditional institution. At Columbia, [students] have these creative skills and insights, maybe a more intuitive-knowledge base. If you can exploit that in a classroom, you end up having much more interesting conversations.