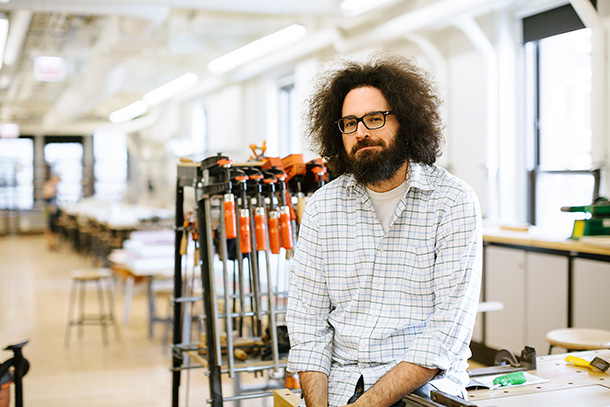 “Now that technology is a huge part of politics, finance, and [social life], you can’t really get away from that topic anymore. Technology-related art isn’t necessarily silent at this point. It’s where everything meets.”

Towering at 6 feet 5 inches, Associate Professor Taylor Hokanson is hard to miss. Even more striking are his unique projects, which incorporate technology from concept to execution.

Here are three things to know about the artist, engineer, hacker, and all-around tinkerer.

He can print sweaters.

Thanks to an open source coder, 1980s Brother knitting machines can be hooked up to a modern computer to “print” a two-tone image with yarn. Hokanson and fellow artist Dieter Kirkwood put on a series of workshops with the Chicago Public Library’s Maker Lab, where participants made patterned wool squares that were then incorporated into a quilt.

“It literally sits there like a printer, you load the yarn in, you upload the pattern, and you tell it to execute,” Hokanson says. “It’s motor driven, so it produces the entire garment by itself.”

He thinks technology and art go hand in hand.

Besides digital knitting, Hokanson’s other notable projects include a colossal keyboard that requires a sledgehammer to operate, art prints made from text left on discarded typewriter rollers and the DIYLILCNC, a build-your-own CNC router (a tool to carve objects using digital commands) that can be made for hundreds of dollars instead of the typical thousands. For him, combining art and technology is a no-brainer.

“I think a lot of folks, when they see technology-centric art, they really just see the technical components, the metal, the physical function, and that’s kind of the end of it,” he says. “But now that technology is a huge part of politics, finance, and [social life], you can’t really get away from that topic anymore. Technology-related art isn’t necessarily silent at this point. It’s where everything meets.”