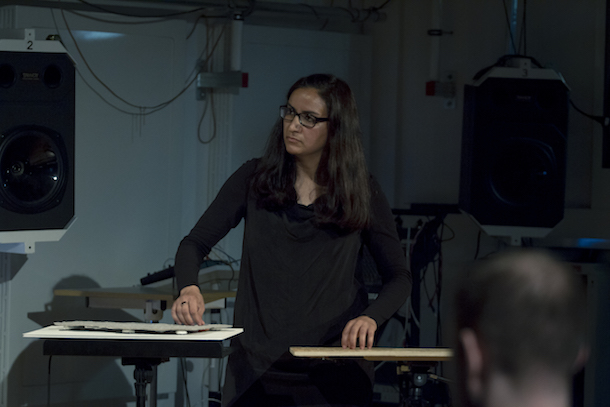 “At Columbia, you have access to the equipment and everything you need to focus on audio. There are not many institutions that have such an amazing audio department.”

It’s a peculiar sight: People singing, talking, and babbling into microphones placed around a small concert room. Their voices pass through a computer program that alters them just as a guitar pedal changes the timbre of a note. Through loudspeakers, the many voices meld into an ambient wash of sound, an experimental concert. Music technologist Visda Goudarzi, an assistant professor in Columbia College Chicago’s Audio Arts and Acoustics Department, wrote code for the computer program that made this concert possible. She’s helped create dozens of concerts like it, advancing audio technology by creating interactive musical instruments.

Goudarzi has traveled the world conducting audio research and teaching students. Now, she is happy to call Chicago and Columbia College Chicago home. “In Chicago, you can work with people in cinema, game, or other fields. And then you have access to companies for jobs after graduating,” she says. “At Columbia, you have access to the equipment and everything you need to focus on audio. There are not many institutions that have such an amazing audio department.”

The instruments Goudarzi makes aren’t conventional ones. They may simply be an electronic circuit or a computer program, like the software back at the concert room. Regardless, she prefers inclusive instruments. “I’m interested in instruments that everybody can play, not just the designer of it,” she says. “That’s why I’m into participatory performances, where you leave instruments in a room and people come and play. The audience becomes the performer.” The ability to create user-friendly audio interfaces and electronic instruments opens doors to technological innovations. (Think products like Siri, which is valued for both its speech recognition and accessibility.)

Goudarzi teaches Columbia students how to make their own audio interfaces and electronic instruments. In the class New Musical Interface Design, students learn computer programming and user experience, the study of how people interact with products. Their knowledge of programming, audio, and user experience makes them competitive candidates at “companies that create audio apps, game sound design, and music or audio software,” Goudarzi says.