With the support of the composers-in-residence, you’ll have the chance to pilot full-length projects and experience the professional scoring process in all its real-world complexity.

A one-of-a-kind residency program brings nationally renowned composers at the height of their careers to Columbia for seven-week workshops with Music Composition for the Screen MFA students.

The composers work with students to recreate one of their professional projects from start to finish. Under the composers' guidance, you’ll experience the scoring process for each project exactly as it originally happened.

Our small class sizes and the length of these residencies mean that you’ll truly get to know the composers artistically and professionally—and that they will get to know you, too. 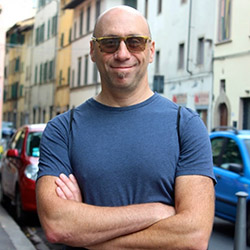 Emmy Award-winning composer Joel Goodman creates music for narrative feature films, documentaries, television, album releases, performance ensembles and other forms of collaborative media. Joel has scored over 125 films and television programs that have received 5 Oscar nominations, 20 Emmy awards and over 30 Emmy nominations. He has scored over 40 films for HBO and composed the Main Theme for the long-running and critically acclaimed PBS series American Experience. His scores can regularly be heard in movie theaters and on television around the world. Joel also serves on the board of the Production Music Association where he is the Chairman of the Performing Rights (PRO) Committee. 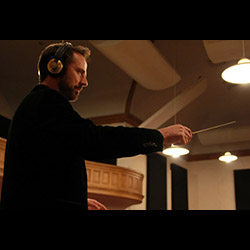 Chance Thomas is an American composer, author, and entrepreneur. He is best known for scoring video games like DOTA 2, The Lord of the Rings Online and James Cameron’s Avatar. He also scored Columbia Pictures’ The ChubbChubbs!, which won an Academy Award for Best Animated Short Film, and TV movie Lost Treasure Hunt, which was nominated for two Emmy Awards. Chance is the author of a university textbook, Composing Music for Games: The Art, Technology and Business of Video Game Scoring, released in 2016 by CRC Press. His projects have won major awards, including an Oscar, Emmy, IGN, Telly, Aurora and several G.A.N.G. awards. He is considered the father of game music Grammy eligibility and was honored in 2013 with the Game Audio Network Guild's Recognition Award. 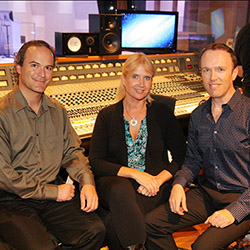 Emmy Award-winning composers Michael McCuistion, Lolita Ritmanis and Kristopher Carter, collectively known as Dynamic Music Partners, have created hundreds of hours of music for a variety of different genres, including TV series, independent films, video games and live performance events. They have collectively earned twenty-eight Emmy Award nominations and six Annie Award nominations as composers for Marvel’s Avengers Assemble, Batman: The Brave And The Bold, Justice League, Teen Titans, Batman Beyond, The Zeta Project and The New Batman Superman Adventures. Original concert works and suites of their scores have been

performed in festivals and special events; from New York’s Lincoln Center to The Hollywood Bowl, The Kennedy Center, The Griffith Observatory in Los Angeles, Tenerife – Spain and beyond, their music has received critical acclaim.