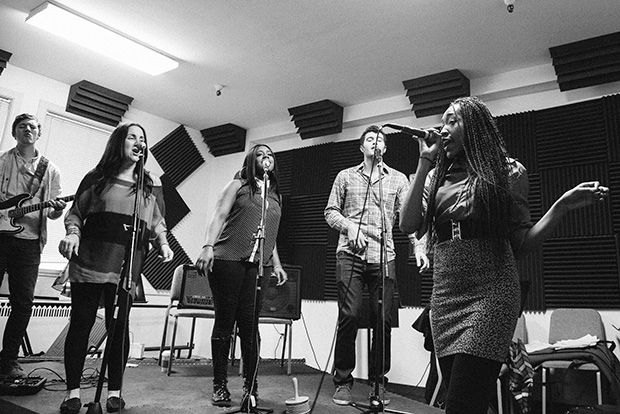 Breakaway, Columbia’s a cappella vocal ensemble, performs the contemporary repertory of well-known groups such as the Pentatonics and Take Six as well as newly-commissioned works and traditional pop-jazz and R&B arrangements. The group emphasizes skillsets such as harmony, balance, blend, and dynamic aesthetics to further develop the ensemble singer. In this ensemble, that soloists supported by close harmonies and interweaving parts expands the singer’s accuracy of technique and musicianship. Honing skills and rehearsing in and out of class prepares the group for performing at Columbia’s Open House event for an audience of more than 2,000 people, as well as concert presentations each semester.

C_LEns is a vehicle for electronic music performed onstage by autonomous performers. Each performer uses a laptop computer running custom-designed software (usually in the Max environment) for each composition. Just as in a chamber ensemble of acoustic instruments, the audience experiences each performer’s sound as emanating directly from him or her. The ensemble’s performance is often enhanced by means of handheld controllers such as or game controllers.

The repertoire of C_LEns is varied, following traditions embraced by Varèse, Stockhausen, Cage and others, and expanding to sound art, soundscapes, spectral music, structured improvisation and the imaginations of living composers, many of whom workshop their pieces with the ensemble. The ensemble has occasionally performed pieces written by student members. Collaborations include dance, poetry and invented sound controllers. The ensemble usually performs at least twice during a semester, both on and off campus.

Columbia’s small, free-form Chamber Music Ensemble is intended for instrumentalist/composers. It is a creative performance class that focuses on the production, rehearsal, and performance of contemporary classical and world music arrangements, as well as original compositions by and for the student members under the guidance of a faculty member. The group presents several concerts during the semester. The ensemble expands students’ knowledge of various genres of music and instrumental possibilities and combinations. It challenges students to create, read, and learn music in unusual contexts, and to further improve their music literacy and ensemble performance skills.

The Fusion Ensemble is an advanced ensemble that performs a wide range of music, from the intricate compositions of Herbie Hancock to the eclectic R&B sounds of Snarky Puppy, as well as original compositions. The ensemble includes trumpet, sax, guitar, piano, bass, drums, and vocals.

Through the Artists in Residence program, the Fusion Ensemble has had the opportunity to perform with jazz legends Stefon Harris, Wycliffe Gordon, Bob Mintzer, Dave Douglas, Christian McBride, Mike Stern, Peter Erskine, and Fred Wesley. The ensemble has performed at the Notre Dame Jazz and Elmhurst Jazz Festivals for the past five years, receiving many Outstanding Soloist awards. In 2017, the Fusion Ensemble performed with Wycliffe Gordon at the Jazz Educators Network convention in New Orleans. The group was recognized for outstanding performance in the 2017 DownBeat Student Awards.

The course requires that entry-level music students learn and perform solo and ensemble gospel literature, including traditional spirituals and anthems. Students initially learn by ear and then learn to read and notate as well as analyze and describe gospel repertory. Additional emphasis is placed on understanding the relationships between gospel music, the other arts, and the cultural context in which contemporary gospel music functions. The Gospel Choir performs at many campus events, including Manifest, Columbia’s annual urban arts festival.

This is a showcase-level course for instrumentalists and vocalists that explores and applies both theory and performance techniques within the context of gospel music and the African-American church tradition. Students will be required to learn and perform often a challenging and rewarding gospel repertoire that ranges from the roots music from 1900s to the contemporary hits of today. Ear training, “ear trusting,” improvisation, and artistic freedom are valued and emphasized as central principles within the gospel music tradition.

Groove Band is an eclectic pop/rock ensemble for instrumentalists of almost all skill levels. Although the repertoire frequently changes with each semester and group, the Groove Band covers songs from Muddy Waters to Motown, Stevie Ray Vaughan to Sly and the Family Stone, among many others. Each semester culminates in a performance in the Music Center Recital Hall.

Designed for intermediate and advanced guitarists, this course emphasizes ensemble playing for guitar in all styles. Through rehearsal of appropriate multiple-part arrangements and the practice of composing and improvisation, the group prepares a series of performances. Students increase repertoire and develop musicianship skills.

This ensemble performs a wide variety of music drawn from across hip-hop history, including the work of such artists as The Roots, Kendrick Lamar, Kanye West, Common, A Tribe Called Quest, and other hip-hop legends. The Hip-Hop Ensemble includes a live band and vocalists including singers and MCs. The group strives to include material that is socially and culturally relevant and challenging. MCs collaborate with the class and develop their writing style and musicality. Instrumentalists develop musicianship, improvisational and collaborative while creating a cohesive performing unit.

The Columbia College Chicago Jazz Ensemble was created by Scott Hall and Bill Russo in 1999. The ensemble is a diverse team of students performing dynamic original music on the Columbia campus and throughout the Chicago region. Outstanding performances in the Chicago area and Europe have established the ensemble as one of the foremost college jazz ensembles in the Midwest. The ensemble has performed in concert with many celebrated jazz artists. In recent years, the ensemble has performed with Donny McCaslin, Stefon Harris, Benny Green, Dave Douglas, Jeremy Pelt, Gerald Clayton, Barry Harris, Wycliffe Gordon, Lee Konitz, Terence Blanchard, Cyrus Chestnut, Bob Mintzer, Peter Erskine, Fred Wesley, Christian McBride, Benny Golson, and Vincent Gardner. The ensemble and numerous members have won awards as performers at area festivals. Many of our alumni have traveled the world pursuing their life-long dreams as performers.

While steeped in the tradition of big bands, the ensemble has become a catalyst for original contemporary music composed and arranged by Columbia students. Students have the opportunity to workshop their material in rehearsals, receiving feedback their peers, teachers, and visiting artists in residence. Student works are featured in performance at legendary Chicago venue the Jazz Showcase and in the recording studio.

“Conveyed an easy swing sensibility amid a robust orchestral sound.”

“A clever piece of writing steeped in rhythmic surprise. Accents shifted, tempos changed, stopped and started and stopped again in this showpiece of ensemble syncopation.”

The Jazz/Pop Choir advances the understanding and mastery of jazz and pop through rehearsal and performance of group repertoire in a variety of styles. Traditional choral skills of blend, balance, unison and harmonic intonation, and articulation in swing, pop Latin genres, are studied through rehearsal and performance using microphones and sound reinforcement. Students learn to sing with a rhythm section, a cappella, as soloists, and in men’s, women’s, and mixed small groups. Students participate in an end-of-semester performance as well as additional performances on and off campus. Occasional workshops may be substituted for rehearsals. Independent practice and memorization required, as are weekly sectional rehearsals.

New Music Ensemble is Columbia’s free-form chamber orchestra. Primarily for instrumentalists, it is a performance class that focuses on the development, rehearsal performance of classical, contemporary classical and world music arrangements, as well as original compositions by student members.

This ensemble provides an opportunity for students to perform challenging music with their peers under the guidance of a faculty member. The group presents a concert at the end of each semester. Expanding students’ knowledge of various genres of music, the New Music Ensemble challenges students to read and learn music in unusual and to further improve their music literacy and ensemble performance skills.

The Pop Rock Showcase Ensemble is an advanced Contemporary, Urban, and Popular Music (CUP) ensemble performing various styles of the pop/rock genre from the 1960s to the present. This group usually includes two guitars, keyboards, bass, drums and four vocalists. The ensemble replicates all the parts from the original recordings of the songs it performs.

Columbia’s Artists in Residence program has provided the opportunity for the group to perform with pop/rock musicians Todd Rundgren, Joan Osborne, Shawn Mullins, Ivan Neville, and Charlie Sexton. The ensemble performs on campus and at famous rock club Reggie’s Chicago. This high-level ensemble has often been chosen to play at Columbia’s commencement ceremonies.

An advanced performance ensemble drawing its repertoire from classic and contemporary R&B artists such as Earth Wind & Fire, James Brown, the Gap Band, Chaka Khan, Parliament and others, this ensemble prepares students to perform with confidence and professionalism in a contemporary rhythm and blues context. Students learn how to front a band and interact with fellow band members to create an exciting live performance.

Ensemble members research and present material to the rest of the group for inclusion in the ensemble repertoire. Students learn the keys to playing tight R&B grooves while perfecting a live show to be performed at various venues on and off campus. The course includes the recording of a live demo in a professional studio environment.

The Recording and Performance Ensemble (RPE) experience includes extensive work in the multi-track recording studio, as well as regular on- and off-campus performances.

RPE students form collaborative, original music projects, which last through consecutive fall and spring semesters. Over the course of the academic year, these bands write, record, and develop their material, and overall artist profile under the guidance of their faculty project directors, staff and guest producers, visiting artists in residence, and student artist-development teams from the Music Business program. Each RPE project works with their team to develop an EPs-worth of high-quality recorded material, as well as a performing act suitable for showcasing to industry professionals. Other areas of Columbia student collaboration with RPE bands may include live booking, music video production, regional touring, and showcasing at industry events such as SXSW.

The course represents the students’ progression from the advanced to the professional level and is intended for performers, performing writers, and producers. While the course is a required capstone experience for Bachelor of Music candidates in Contemporary, Urban, and Popular Music, qualified instrumentalists, singers, and writers with requisite ensemble experience and Music coursework may also participate. Placement into RPE requires the approval of the CUP Program Director.

These introductory and intermediate-level survey ensembles focus on a variety of essential and influential musical styles, with each genre taught by a team of professional practitioners who specialize in the area of focus. The semester is divided into four-to-five week modules, as these ensembles rigorously investigate of iconic genres such as blues, R&B, pop/rock, jazz, gospel, Latin, and progressive rock artists. Students learn important background as well as the idiomatic musical language of each genre they study.

Chicago Vox is a select group of eight to 12 vocalists and a rhythm section. The ensemble performs an a cappella and accompanied repertoire of jazz and with global musical influences; all music is memorized, and improvisation is encouraged. The ensemble performs twice during the semester on the Music Department’s schedule of concerts and for events such as Manifest, Columbia’s annual urban street festival; Commencement; and other special engagements, both on and off campus throughout the year. All members and prospective members must audition for placement in the ensemble each year.