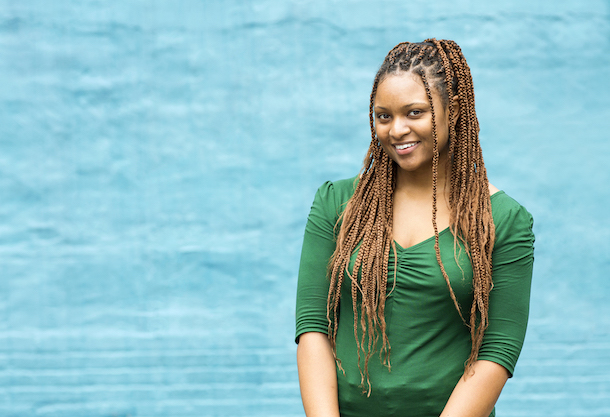 Cimone Dailey rises to new heights as a Journalism and User Experience student.

Cimone Dailey left her home in the Los Angeles suburbs to try something new at Columbia College Chicago. A theatre kid since age six, she chose to study Journalism and User Experience. Below, she discusses some of her most challenging—albeit instructive—moments at Columbia.

A few months after graduating high school, Dailey found herself standing alone on the threshold of her new home. “My parents didn’t come for my first time at Columbia. I got out of my Uber in front of my dorm and was like, ‘What is going on.’” At first, navigating Chicago seemed a little daunting to Dailey, a self-described homebody. But she ventured out and learned the transit system, an accomplishment that lifted her spirits: “Mastering [public transportation] felt so good!”

Dailey learned firsthand that good journalism requires sacrifice. One snowy afternoon, Associate Professor Jackie Spinner moved Dailey’s class to city hall. That meant a hike across downtown through the cold. Dailey and her classmates grumbled about the weather. Spinner, a seasoned war reporter, replied, “You think you’re cold, talk to a Syrian refugee.” “I was like wow, that’s drive,” Dailey recalls. “Let me take my butt outside and be cold but get the story.”

In her proudest moment, Dailey set a new standard for User Experience students. For Interface Design II, she had to create a universal interface, an assignment that no student had ever earned an A on. After weeks of diligent work, she turned in her interface, a product that allowed users to tour Columbia’s campus remotely. Her final grade? A. “I was like, ‘wow,’” she says. “I’m good at this. I can do this.”