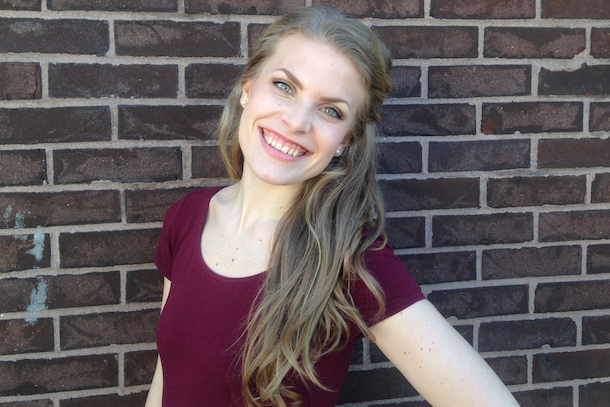 “The instructors at Columbia all have industry experience, so right from the get-go, I was being prepared by experienced professionals.”

Evelyn Hilleren Finne talks about being a student in the Columbia musical theatre program.

Evelyn Hilleren Finne is a Musical Theatre major from Oslo, Norway. Finne jumped on the stage at age three, when she started dancing ballet, and later jazz, and at age seven she started her vocal training. Finne’s performance credits include Columbia’s productions of Glockenspiel and Love and Information, as well as a Norwegian TV production of the musical Jakten på Juleskurken.

You’ve been involved with dancing, singing and acting since you were a toddler. How has Columbia further prepared you for the professional world?

The instructors all have industry experience, so right from the get-go, I was being prepared by experienced professionals. The theatre program has a huge focus on how to audition well and market yourself, such as getting business cards and practicing interview techniques. Overall, there is a common element to each course: How can we become the best in our field? We work hard to answer that question from every angle.

Is there a professor that has been particularly influential for you?

Associate professor Ashton Byrum has been important for me since the beginning. When I transferred in from another college, he helped place me in the right classes, and now he acts as my advisor. Whenever I need help, I know that I can stop by and ask him anything, whether it be a business question or advice on an audition piece. He earnestly believes in his students, and advocates for us to reach for the jobs where we can get a real pay.

What is one of your favorite classes?

Musical Theatre Audition Workshop is a five-week course that focuses on auditioning for musical productions. You are tasked with building a book of at least 10 songs, each week focusing on two different genres. The first week, the task might be, “Bring to class one Rock song and one Golden Age song.” So you bring in your musical cuts, mark the sheet music for the pianist, and perform for the class. Your peers and instructor will offer feedback, and then everyone works together to better the performance.