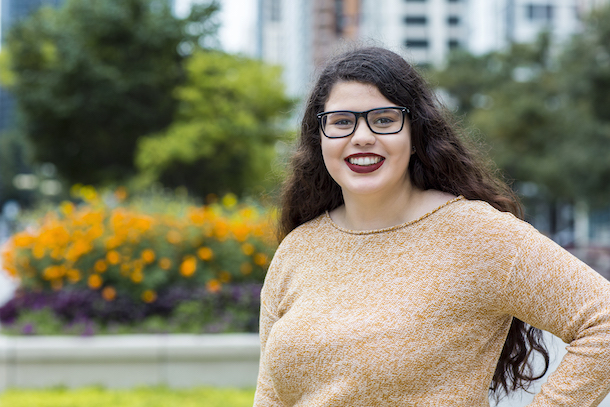 “Stage combat is a little niche and it’s more a freelancing-type career. But I have teachers around me who know how to get into that and live off of that. ”

Mariah Suarez wants to make the theater a safer place for actors.

Mariah Suarez grew up performing in community theatre, where she saw the simplest of stage-combat moves go terribly wrong. A botched slap can leave a performer with a stinging cheek, and a simple push can send another tumbling off stage. To make the theater a safer place for actors, she majors in Acting with minors in Teaching Artist and Stage Combat. In addition to her studies, she is president of the Harry Potter club at Columbia College Chicago.

A lot of schools in the country have theatre majors, but they don’t have acting or stage combat. Everyone else I know stayed in rural areas. I was the only one like, “I’m going for it.” And here I am.

What have you learned at Columbia that you wouldn’t have learned elsewhere?

I definitely wouldn’t learn as much about the [theatre] industry. I can go see my teacher in a show. I can go learn about auditions. Stage combat is a little niche and it’s more a freelancing-type career. But I have teachers around me who know how to get into that and live off of that.

What’s your role in the Harry Potter club?

I’m the president of the Muggle Association of Columbia, which is our Harry Potter club. We run a Yule Ball every year and an opening feast at the beginning of every school year for incoming students. Every year, we have a student-run convention in the Conaway Center called ColumCon. We bring in artists from the school and have panels run by students. It’s like a full-on Comic Con except it’s extremely small.

What advice would you give to incoming students?

Go hang out in clubs because you meet people in every department. I could get headshots for $20 instead of $100 because my friend is a Photography minor.