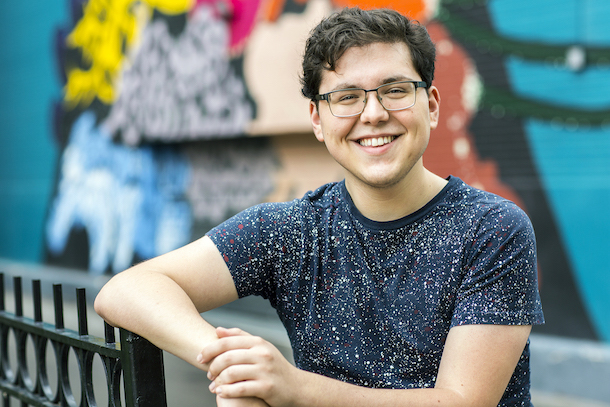 “I [have] a lot more agency in my life. … I don’t think I would have gotten the same experience [at] a larger school.”

Game Development major Parker Hamilton always thought he would attend a big state school. Things changed when he heard about Columbia College Chicago from his grandmother, who worked as a travel agent for a film professor here. Columbia offered an environment where he could gain industry experience, collaborate with peers, and grow as an individual.

Being from a small Ohio town, Hamilton was nervous about living in Chicago. But he soon found a group of close friends by joining the Alpha Lab, a Columbia club that aims to diversify the gaming industry. Soon, he became one of Alpha Lab’s executive board members. The club offers workshops on gaming software, hosts talks by professional game developers, and fosters relationships with the local gaming community. The Alpha Lab allows Hamilton to cultivate leadership skills while making professional connections.

When Hamilton struggled with some personal issues sophomore year, the quality of his school work suffered. His instructors, knowing him to be capable of more, expressed their concern. “They weren’t like, ‘Hey step up your game,’” he recalls. “They were like, ‘If you need to talk, we’re here.’ That was refreshing.”

Hamilton says that Columbia, along with providing a solid education, has helped him become more independent and compassionate. “I [have] a lot more agency in my life. … I don’t think I would have gotten the same experience [at] a larger school. Columbia’s very hands-on, very ‘people-are-human’ approach makes me feel like I can grow.”