Ida B. Wells Drive Becomes First Downtown Street Named After a Woman or Person of Color 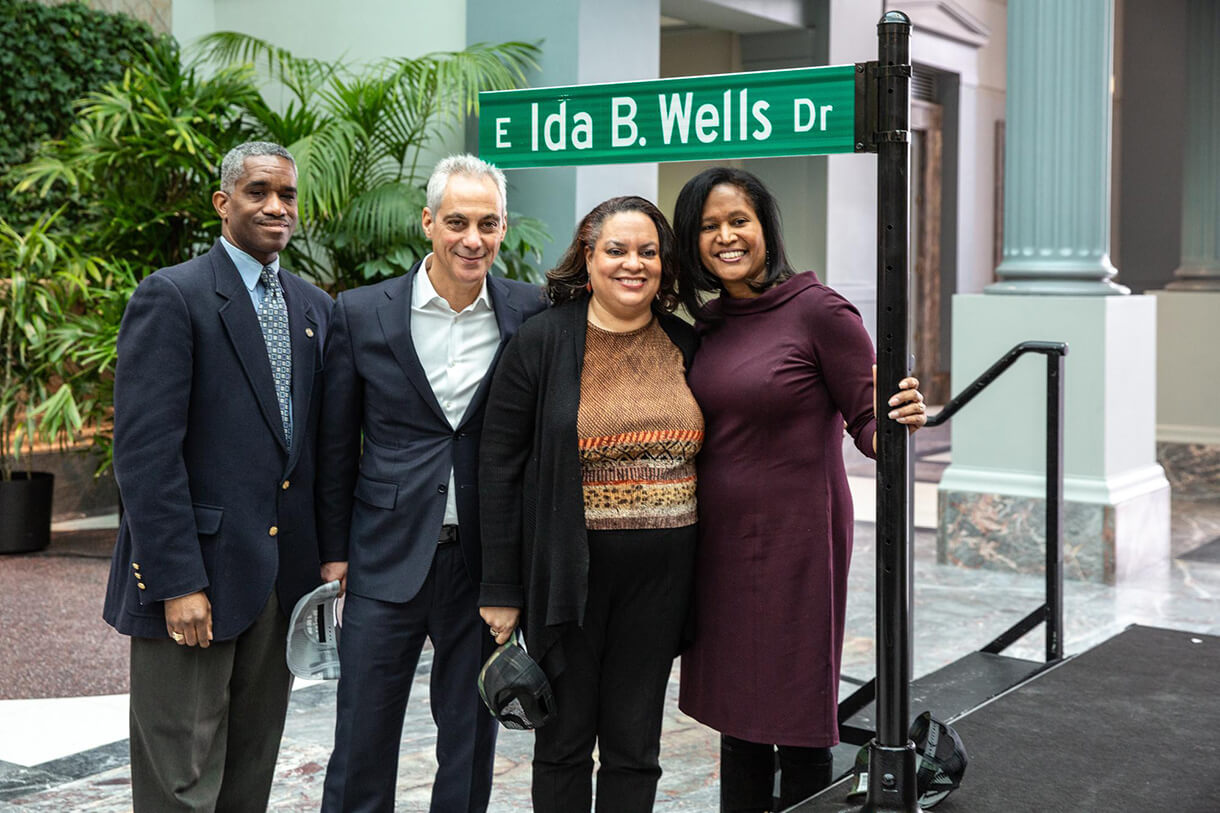 "Ida B. Wells Drive reminds everyone that regardless of where they start in life, or what their gender, race, religion or ability may be, that it is possible to make their voice heard and to impact change."

More than 85 years after her death, the name and legacy of civil rights champion Ida B. Wells has been memorialized in downtown Chicago.

Congress Parkway was renamed Ida B. Wells Drive on February 11, in honor of the anti-lynching activist, suffragist, and journalist. This also marked the first time a street in downtown Chicago was named after a woman or person of color.

Wells’ great-granddaughter Michelle Duster, a native Chicagoan who teaches in the Business and Entrepreneurship department at Columbia College Chicago, has long advocated for greater recognition of her foremother, who was a founding member of the National Association for the Advancement of Colored People (NAACP). Duster raised funds and worked with the city, which decided on July 25, 2018 to name a street in downtown Chicago after Wells.

"Ida B. Wells Drive reminds everyone that regardless of where they start in life, or what their gender, race, religion or ability may be, that it is possible to make their voice heard and to impact change,” said Duster.

Keynote speaker Chaz Ebert, wife of the late film critic Robert Ebert, said that this is “a time of feminine consciousness” and “Ida had this” so many years ago. “We all have the universal need to be seen…our youngsters need to know that they matter,” Ebert added.

Ida B. Wells’ lasting legacy and contributions to the civil rights movements were great; however, they were not widely recognized in a prominent way—even in Chicago—a city where Wells lived since 1895 and continued to work and affect change for African Americans until her death in 1931.

“And yet it takes until 2019 to get a street named in her honor in the city where she is buried. I think that speaks to the way we have always erased the contributions of black women in this country,” said Nikole Hannah-Jones, a New York Times journalist who also spoke at the ceremony. “It is Ida’s time,” Hannah-Jones added. 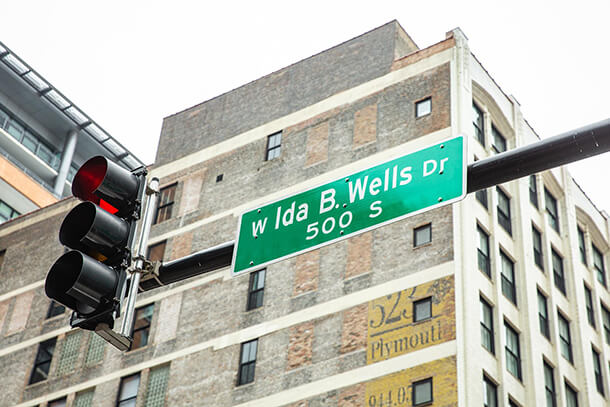 Duster raised funds and worked with the city, which decided on July 25, 2018 to name a street in downtown Chicago after Wells. Photo: Phil Dembinski ’08

Recently, Duster worked with the Ida B. Wells Commemorative Art Committee to develop a monument in Chicago’s Bronzeville neighborhood at 37th and Langley, where Wells once lived, worked, and raised her family.

Duster is an award-winning author, speaker, and educator on topics involving women’s rights, monuments, and empowerment. Since 2008, she has written, edited, and contributed to several books and articles, and actively works to develop city, state, and national projects that focus on the contributions of African Americans and women. She edited the books Ida In Her Own Words and Ida From Abroad, and is currently writing a biography about Wells.

Most recently, Duster co-edited a book, Michelle Obama’s Impact on African American Women and Girls, an anthology that examines Obama’s role as First Lady of the United States.

Duster earned a BA in Psychology from Dartmouth College, completed coursework for MFA in film and video at Columbia College Chicago, and earned her MA in Media Studies from the New School in New York City.

Media coverage of the historic unveiling can be found in the Chicago Tribune, Chicago Sun-Times, Chicago Reader, NBC Chicago, and WBEZ Chicago.