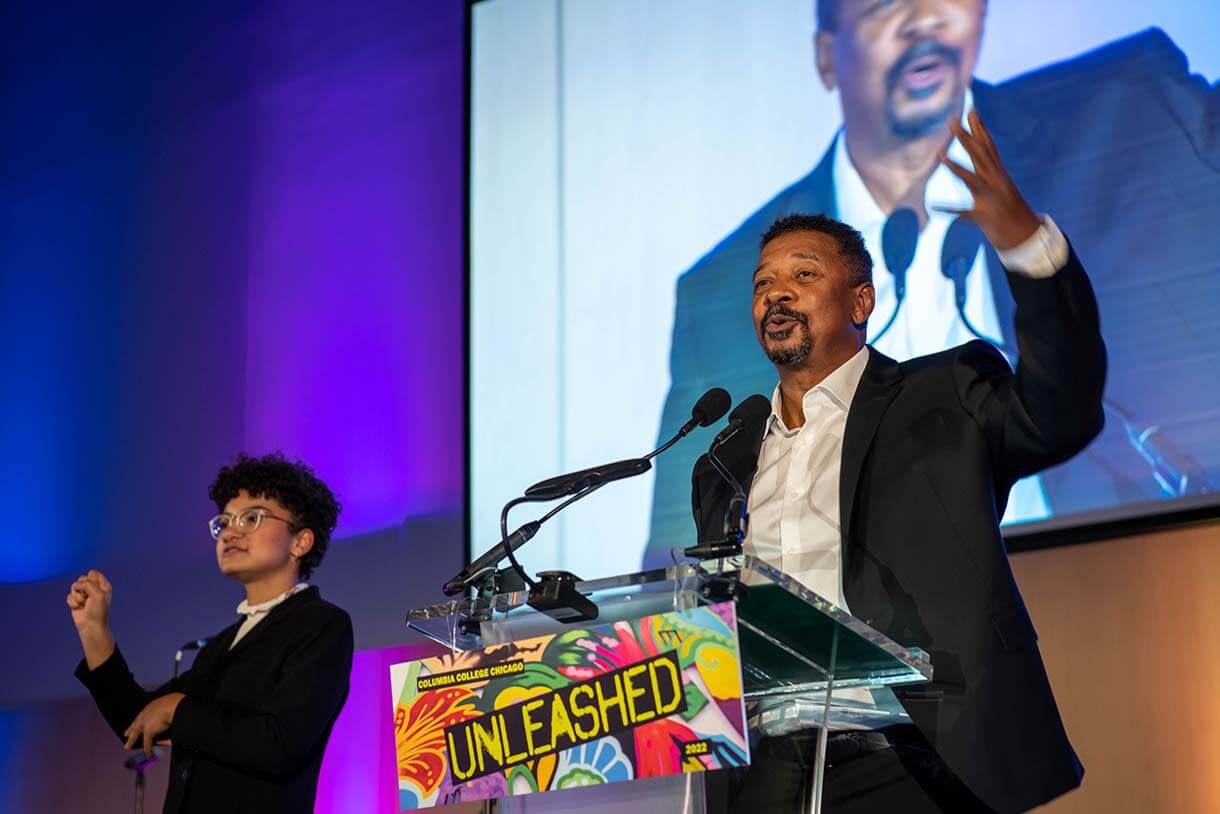 Columbia College Chicago recognized Robert Townsend on Thursday, December 1, at “Unleashed 2022” a scholarship fundraiser held at its south loop campus. The Chicago native was chosen to receive the first of its kind award for his trailblazing and entrepreneurial career in the entertainment industry.

“We are pleased and honored to present you with the Columbia Icon Award in recognition of your remarkable professional accomplishments and your fierce determination to create opportunities for creatives of color in the entertainment industry,” said Kwang-Wu Kim, President and CEO of Columbia College Chicago.

But Townsend’s decades-long career includes directing roles for dozens of films, documentaries, sitcoms, stand-up comedy, producing, and writing. Townsend’s most notable work includes credits for films such as Hollywood Shuffle, Eddie Murphy Raw, and The Five Heartbeats; the television show The Parent ‘Hood and many other productions garnering him several Lifetime Achievement Awards from the Chicago International Film Festival, Congressional Black Caucus, and American Black Film Festival-BET Honors and many other accolades and honors.

At the fundraiser, Townsend talked about growing up on Chicago’s West Side where his mother advised him to come straight home from school every day to avoid gang violence. Shutting the door to the outside world, Townsend would turn on the television and enter a world of entertainment. He watched so much TV his family nicknamed him “TV Guide” for the hours he spent learning the network lineups.

Townsend graduated to memorize lines of Shakespeare in the fifth grade. Recognizing Townsend’s gift, his teacher, James Reed, entered him in speech festivals and competitions across Chicago. In 1968, Townsend won his first award and credits Reed for putting him on an extraordinary life path. "He got past the pimps and hustlers to get me from on the west side of Chicago. He was my first angel.”

While accepting his latest award, Townsend mentioned additional mentors, his first director and first acting coach from his childhood who attended the gala. Townsend then addressed the several hundred corporate sponsors and private donors, “Today, this room is filled with angels. A whole generation of artists will be born in Chicago because of you.”

The more than $750,000 raised will benefit persistence scholarships for Columbia students.

Before the ceremony, attendees experienced an entirely student-produced and curated set of activations that included live fashion, music, poetry, virtual reality immersion, a recording studio in action, and more.

“When you saw those kids outside; I was one of those kids,” Townsend said.

Making his way to California in the early 1980’s, Townsend navigated the challenges faced by people of color in the industry. Those experiences inspired him to write, direct and star in Hollywood Shuffle, a comedy about black men and their struggle in the entertainment industry.

Townsend says his adaptability and perseverance in a creative industry is what helped him survive in Hollywood. Those skills, along with the business side of the industry are what Columbia teaches and instills in its students. Another institutional value is diversity, equity, and inclusion. Columbia’s curriculum is rich with works from worldwide cultures and perspectives, and its students come from diverse backgrounds and identities.

“There are family stories that deserve and need to be told,” said Cinema and Television Arts Professor Michael Nierderman. One of Niederman’s students, Kimberly Vasquez came to Columbia from Laredo Texas and also received a persistence scholarship, “I remember I started crying when I got the scholarship because I don’t have to worry whether next year, I’ll be able to continue with school.”

“The testimonials that we heard are a compelling reminder of why persistence scholarships at Columbia College Chicago are so important. Many of you have been so generous to this event and for that, we are extremely appreciative,” said Hugh Williams, Columbia College Chicago Trustee who also co-chaired “Unleashed, 2022” along with his wife Constance and fellow trustee John Holmes and his wife Jenni Sorenson.

“Sometimes the path to graduation isn’t a straight one: Life throws up obstacles that students have to work through or work around in order to reach their destination. And sometimes those obstacles are financial, and students who are making timely progress towards a degree find themselves facing hard choices about whether they can afford to continue their education,” Holmes said.

Townsend says his own path was certainly not easy, but his hard lessons are what shaped his career and his success. While the industry can be tough for students and aspiring creatives, “Unleashed, 2022” is meant to at least ease the path to degree completion; helping young creatives to graduate and eventually shape what’s next in industry and culture.