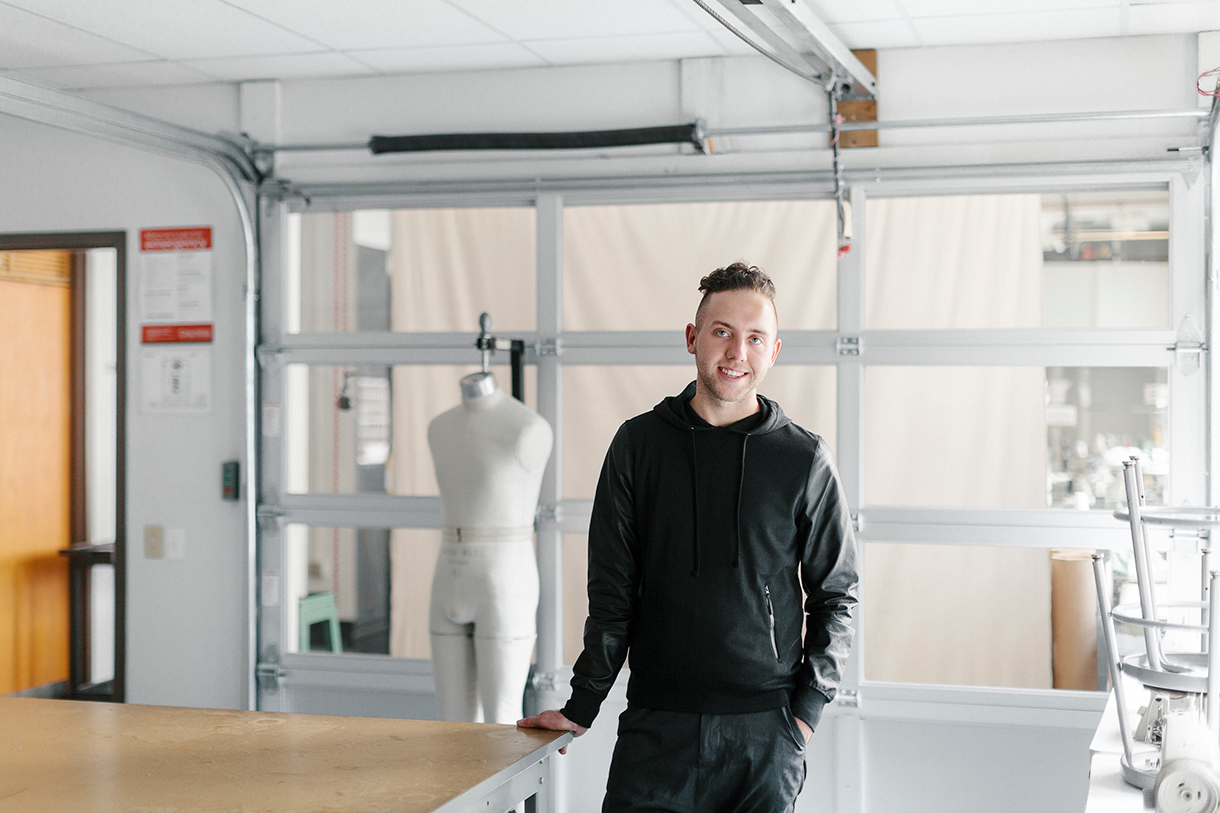 When it comes to fashion design, most people get a glimpse into the profession through the long running, Emmy-winning reality show Project Runway. Now in its 13th season, Project Runway is one of the most popular competition shows on television and has launched the successful careers of past winners like Michael Costello and Christian Siriano.

This season, one of Columbia College Chicago’s own, Fashion Studies BFA senior Alexander Knox, landed one of the highly competitive, coveted spots. And because he’s still a student, Knox made a promise to Project Runway mentor and former dean at Parsons School for Design, Tim Gunn, that he would finish school whatever the outcome may be. I recently had the opportunity to sit down with Knox to get some behind-the-scenes tidbits on the show and how Columbia College Chicago prepared him for the national spotlight.

…was what Knox first said when he walked into The James Hotel for his callback audition. He thought it would just be a “little casting thing with the producers,” but when he saw Tim Gunn on the panel, he became star struck.

Knox grew up watching Project Runway and he would sketch his ideas while watching the show. He then took sewing classes in high school so he could learn how to create what he was drawing. In some ways, he’d been preparing for the show all his life. What he wasn’t prepared for, though, was the grueling process of auditioning and creating so many new designs in the timeframe of reality television. 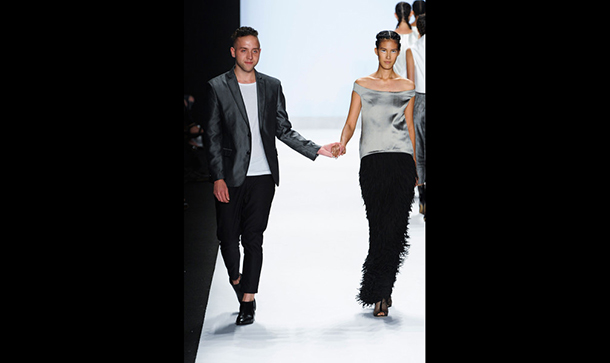 From Columbia College to the national spotlight

Knox credits the Fashion Studies department, especially the faculty, with preparing him both as a designer and as a contestant on Project Runway. He shared that perhaps his biggest influence has been adjunct faculty member Beata Kania because she “respects you as a designer and sees you as a designer and doesn’t see you as a student.” It’s a similar refrain across Columbia College, where students often work side-by-side with their instructors/professors on projects and where they hit the ground running in their field of study.

“Alex Knox walks through the classroom door and becomes everyone's favorite. He is interested, passionate, devoted to his craft, willing to experiment and never loses the momentum,” Kania said. “His warmth, gratitude, respectful manner and humility personify this six-foot-tall gentle giant. He approaches every assignment like a challenge on Project Runway.”

Another advocate for Knox was assistant professor Elizabeth Shorrock. When she received an email from the casting director, she immediately thought of Knox. She encouraged him to apply even though he was in middle of the hardest week of finals he’d ever had.

“This is a once in a lifetime chance, why not just go for it?” Knox said.

On choosing Knox to apply for the opportunity, Shorrock said, “At Columbia, I would often see Alex working on his garments in the Fashion Lab and each piece just blew me away. Alex has a wonderful ability to marry draping techniques with sophisticated, intricate pattern drafting. All of his garments are created with a distinctive aesthetic, which is rare in such a young designer. In my opinion, Alex has what it takes to be hugely successful. He is extremely talented and very focused. He has a great work ethic and perhaps more importantly, he is extremely humble and sincere.”

Knox shares that the courses that have benefitted him the most in preparing for the competition are “all of the actual construction courses starting at Garment I all the way to Flat Pattern, Advanced Flat Pattern, Draping, and Advanced Draping.” He said these classes were the most advantageous to him toward the show because “if you can’t make it, then you have a problem.”

On top of the technical training he received, Knox also credits much to the mentoring process and the value of having support. "The instructors seeing something in me and just allowing me to develop my aesthetic and what I like to design is really what prepared me and gave me a voice as a designer,” he said.

Knox’s experience on Project Runway overall “has been way better than I could have possibly imagined.” He left with 13 new friends. Some of the most rewarding things about being on the show for him were all of the friendships he made, the knowledge he gained, and the exposure he’s received. The 22-year-old said people have reached out to him saying how inspiring it is that he’s chasing his dreams while he’s still so young. He said, “Chasing my dreams and other people finding inspiration in that has been one of the best things that I could possibly get.”

The worst part of the show for him wasn’t the drama, the challenges, or worrying about being misrepresented. It was “being away from everything.” He felt like he was “transplanted from Chicago going to school and just thrown full force.” He said “the hardest part was that I wasn’t able to reach out to family members at my own leisure,” and to not “have that pep talk and that reassurance” when you have your hard times.

Even though he didn’t have his family to turn to, he felt supported by Tim Gunn from day one. In fact, his favorite part of being on Project Runway is “hands down Tim Gunn.”

“It’s awesome to have somebody who’s there, who’s your little cheerleader and rooting for you.” One thing he learned from Tim was, “As long as it’s executed perfectly, it becomes a matter of taste.”

You can continue to see whether he executes his looks perfectly by watching Project Runway every Thursday at 9/8c on Lifetime or on the Lifetime website. For every episode Alexander Knox is voted a “Fan Favorite,” he wins $1,000. The contestant with the most Fan Favorites will win a grand prize of $10,000 at the end of the season. Now is a good time as any to tune in and vote each week for Columbia College’s own.

“You have 30 minutes to sketch an idea, 30 minutes to shop in a fabric store that is 3 stories and has about 60 bolts of fabric in one section, and then you have [about] 6-9 hours to make a look,” Knox said. “In an average week, they have a challenge Monday, they film the runway show Tuesday, Wednesday they’d have another challenge, and so on.”

Out of nine episodes so far, Knox has been voted a “Fan Favorite” seven times. It’s no surprise since much of what viewers see of him is how he is in real life: sincere, thoughtful and witty. He’s soft-spoken, but his passion for fashion design and enthusiasm for being on the show is infectious. Viewers have also become a big fan of Knox’s endearing deadpan expression, taking to Twitter with videos and photos.

During the audition process, Knox underwent a psych evaluation and one of the questions he was asked was how he felt about being misrepresented on the show. He told them he felt it would be really hard to be misrepresented because he’s such a “low key, down-to-earth person.” The evaluator replied, “You obviously haven’t watched reality television.”

Despite the editing that goes on in reality television, he feels well-represented on the show personality-wise because he’s “always one hundred percent,” and says how he feels. He said he’s filtered, but “it’s a very loose filter...the hinge is about to fall off.”