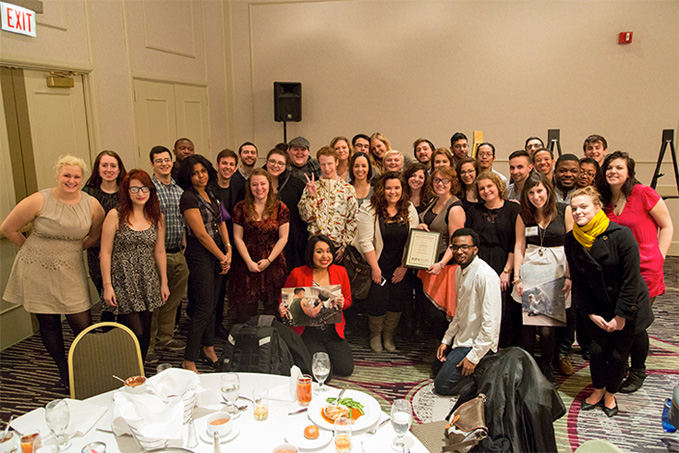 The award-winning staff celebrates at the ICPA dinner.
The Columbia Chronicle won 19 awards from the 2014 Illinois College Press Association, including a first place win in the General Excellence category.

The Illinois College Press Association (ICPA) named The Columbia Chronicle the best college newspaper in the state, and presented the paper with 18 other awards for various work in photographic, graphic, editorial and advertising content. The Chronicle also won first place for its 2013 Sex Issue in the Special Supplement category.

There were 29 college newspapers that competed for ICPA awards. Of those college newspapers, 13 compete in the same category as The Chronicle, which was categorized as a non-daily newspaper at a college with enrollment over 4,000. The Chronicle picked up five first place awards, and overall had 12 current or former staff members individually recognized for the work they produced.

Robin Bargar, dean of the School of Media Arts, said he was “not surprised, but thrilled,” about the state awards as well as the two national awards The Chronicle was awarded last summer—Best Overall Newspaper in the Nation from the Society of Professional Journalists and a Pacemaker Award from The Associated Collegiate Press.

“When all of us are stressed to our limits and ready to break down or walk out, week after week we pick each other up when we get knocked down, talk each other off the proverbial ledge and pump out a kick-ass newspaper,” said The Chronicle’s Editor-in-Chief Lindsey Woods in a newspaper column. “These awards are a nice little push to keep going, so we can continue to bring the Columbia community award–winning important Chicago area news.”