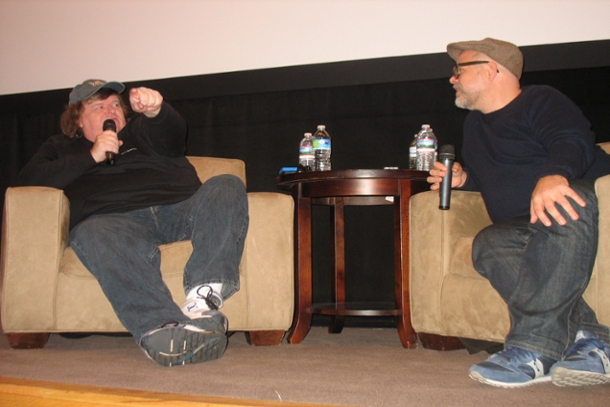 Michael Moore speaks with Dan Rybicky at Film Row Cinema.
In a presentation to aspiring student filmmakers at Columbia College Chicago on Oct. 22, Moore recounted stories from his years of divisive filmmaking.

Filmmaker and documentarian Michael Moore is quick to expound on the merits of not being nice. In a discussion with Cinema Art + Science Professor Dan Rybicky for aspiring student filmmakers at Columbia College Chicago on Oct. 22, Moore recounted stories from his years of divisive filmmaking—including the time he showed up unannounced at actor and NRA president Charlton Heston's Hollywood home to request an interview for 2002 gun control documentary Bowling for Columbine.

"You have a right to ask any goddamn question you want—and you have the right to show people that," said Moore.

Part of the Chicago International Film Festival, the conversation at the college’s Film Row Cinema touched on the ethics of documentary filmmaking—and the benefits of interviews that clash with your own opinions. As a filmmaker, Moore’s controversial reputation builds on politically-charged documentaries like Roger and Me and Fahrenheit 9/11. He urged students to set out to make good movies—not just good documentaries.

“This may seem weird from me, but I mean this: You have to put the art before the politics,” he said.

Moore engaged with aspiring filmmakers during a rapid-fire Q&A session, with topics ranging from the ideal maximum film length (90 minutes) to his favorite movie of the last decade (The LEGO Movie). He also discussed his nonprofit State Theatre in Traverse City, Mich., a one-screen movie theater dedicated to building the ideal experiences for filmmakers and filmgoers.

He applauded the diversity of the Columbia College crowd, talking about the importance of a variety of voices in film. He advised students to always keep the story of a film in mind, instead of aiming to inspire or preach: “Make a movie that you’re going to enjoy, and trust that people are going to enjoy it.”