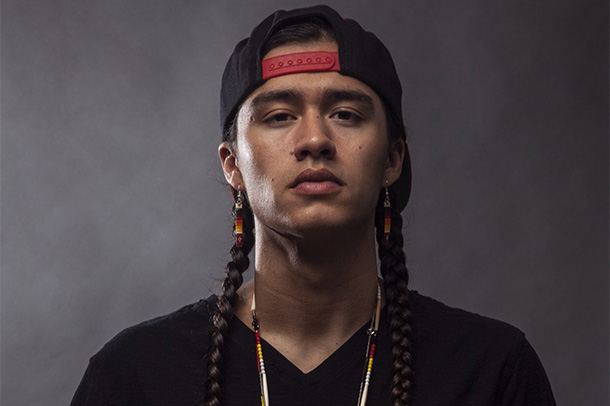 Audio Arts & Acoustics senior Frank Waln (Photo: Melinda Jane Myers)
Audio Arts & Acoustics senior Frank Waln vowed to himself the day he left his home on a South Dakota reservation—where he is a member of the Rosebud Sioux Tribe and identifies as Sicangu Lakota—that he would return one day to help those in his community reach their creative success.

Audio Arts & Acoustics senior Frank Waln vowed to himself the day he left his home on a South Dakota reservation—where he is a member of the Rosebud Sioux Tribe and identifies as Sicangu Lakota—that he would return one day to help those in his community reach their creative success. In the meantime, Waln’s ongoing activism of bringing the struggles of the Native American community to the forefront have led him to win numerous awards and recognition not only at Columbia College Chicago, but across the city and nation.

“I had to leave my community to find opportunity and success as an artist,” said Waln. “There are kids in my community and in other Indigenous communities that are more talented and smarter than I am who deserve the opportunities and successes that I have experienced.”

“He is tireless in his efforts to raise awareness of Native Americans around the country while remaining a top-notch student,” said Ramona Gupta, coordinator of Asian American Cultural Affairs and advisor of the One Tribe Scholars program. “He embodies the best of Columbia College and its commitment to civic engagement.”

He recently was awarded the 2014 Mayor’s Award for Civic Engagement by the college. The Mayor’s Award for Civic Engagement recognizes a graduating senior who has reached beyond Columbia College’s campus and continues to grow as a leader while making creative uses of his/her talents for meaningful, positive contributions to the welfare, culture and vibrancy of the City of Chicago and its people.

Waln’s work goes beyond the campus by participating in Chicago Public Schools’ (CPS) Title VII program, which ensures that each American Indian and Alaska Native child in CPS has equal access to educational opportunities. Waln helps with art-based expression workshops to help students find their own creative voices. He also assists high school seniors in applying for college and finding scholarships.

In addition to his role with CPS, Waln recently marched and performed at the Reject and Protect protest against the Keystone XL Pipeline held in Washington, DC on the National Mall in April. The proposed pipeline route goes through his native tribal lands in South Dakota, which he strongly emphasized that no one in his tribe wants the line as it will endanger the Oglala aquifer, which is their largest source of fresh water.

“With my success and platform comes the responsibility to leave my home a better place than it was when I was growing up,” said Waln.

Beyond his civic duties, Waln’s pursuit of music has garnered him success by creatively using his storytelling talent in combining rap with traditional Native American music. He is an award winning hip-hop artist and producer. PolicyMic.com named him one of seven “First Nation Rappers Crushing Stereotypes of Indigenous People through Music” for speaking out about the Keystone XL pipeline’s effects on Native lands.

Waln also performs and speaks at songwriting workshops in various Indigenous communities throughout the U.S. He has built a track record that includes features in many publications including Colorlines Magazine, Native Sun News, Indian Country Today Media Network, Lakota Country Times, and Winds of Change Magazine.