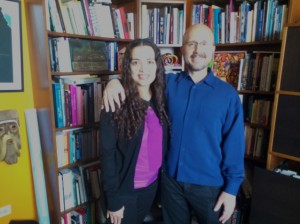 Sonia Garcia and Carmelo Esterrich
The occasional distant saxophone riff and scuffles from the above floor are all that sneak through the brief quiet of a classroom in the music building.

The occasional distant saxophone riff and scuffles from the above floor are all that sneak through the brief quiet of a classroom in the music building. Carmelo Esterrich, associate professor in Humanities, History and Social Sciences (HHSS) is waiting to meet a former student, Sonia Garcia, whom he hasn’t seen in more than a decade.

“It’s rare to hear from a student long after they’ve graduated, much less have one return with lights and cameras to discuss a topic we covered in class!” says Esterrich, bursting through the silence.

Esterrich is dynamic and animated, a fast talker with precision articulation matching the movement of his strides as he feels the room. When Garcia enters, Esterrich is quick to embrace her like long lost friends. She is equally vibrant and starts quickly sharing her enthusiasm for what they’ll be discussing today: corrido music (traditional Mexican ballads).

In an exchange in Spanish then English then back to Spanish again, the conversation is also pocketed with moments of catching up. But, both Garcia and Esterrich are focused on the topic at hand for a special series that will be aired on Univision Chicago, the largest Spanish-language television network in the country. Garcia, a Television alumna, was a student of Esterrich’s in 2003-04, and tells him how his class on corrido music inspired her to produce the series.

“Professor Esterrich was a breath of fresh air when I first met him,” said Garcia, alumna and assignment desk manager for Univision Chicago. “He was so passionate about something that I held dear to my heart, my culture, I took an additional course with him. Finally, someone was teaching me something that had to do with my history, my ancestry.”

Esterrich has been teaching at Columbia College since 1998 and is one of the founding members of the Cultural Studies program. His vast knowledge of Latin American arts and culture ranges from literature and film to music and visual arts, covering issues like revolution and art, the role of women artists across the continent and the social and political power of popular culture. He also teaches all levels of Spanish language, has published in numerous journals and has been a professional dancer.

So, naturally, when Esterrich introduced corrido to his students, he shared sheet music, audio tracks and images that brought one of Mexico’s oldest forms of musical ballads alive in the classroom. Corrido originated as the main informational and educational form of news in Mexico, and later evolved into songs of resistance in the early 20th century starting with the Mexican Revolution. The tradition continues to evolve by addressing contemporary issues, and is a very popular form of music today.

Esterrich was pleased that his classes would leave such a lasting impression, and that Garcia would now do a special series on corridos. While Garcia and her colleagues were considering stories for May sweeps, one of the hottest Latin bands in the U.S., Los Tigres del Norte, was making their way to Chicago as part of their tour. Five-time Latin Grammy winners, Los Tigres is well known for their corridos, and Garcia took the opportunity to tell the larger story of corrido music.

“This special series on ‘Corridos’ came from that same drive professor Esterrich instilled in me,” said Garcia. “Through ‘Corridos,’ many stories are told but many have not had the luxury of being taught their history the way that professor Esterrich taught it to me. It is now my responsibility to give back and help my community. That was my dream and it’s now a reality.”

As for corridos and other topics in Esterrich’s classes that reach students like Garcia?

“I love teaching Latin American arts at Columbia College because Chicago is a city with a vibrant and complex Latino culture that both Latinos and non-Latinos should have an in-depth knowledge,” said Esterrich. “Sonia’s experience is a particularly satisfying one for me, because it brings the personal history of her family with the social history of her country. If education is to succeed in changing lives, it must link the lives of the students with the contemporary living culture of their city.”

To catch “La Historia de Los Corridos,” featuring Esterrich, Los Tigres del Norte and others, tune in to Noticias Univision Chicago May 16 and 17 during the 5 p.m. and 10 p.m. newscasts.