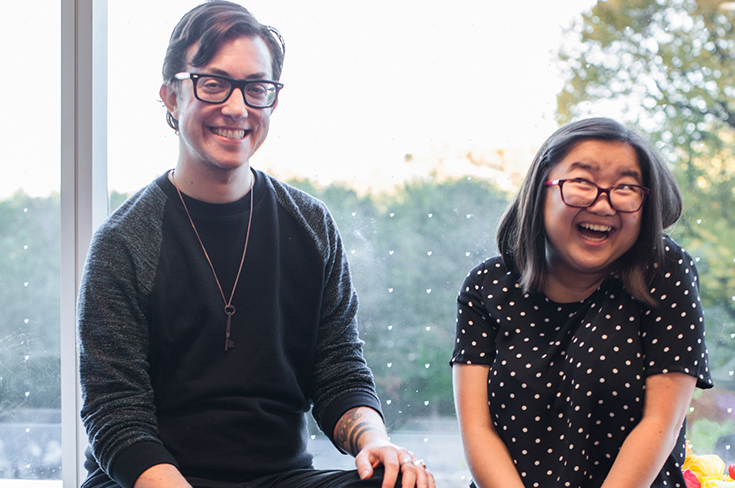 The college’s Gender Inclusive Initiative expands this year with a new pronoun effort.

The students on our campus are talking about pronouns. For many LGBTQ students, faculty, and staff, being acknowledged with the appropriate pronoun is a way of affirming one’s identity, as someone’s gender marker may not always correspond to their gender expression. For those who identify as transgender, gender fluid or genderqueer, the current menu of pronouns available in the modern American English lexicon can be limiting, so usage of alternative pronouns has been on the rise.

The shift in pronouns have become more apparent on a national level, and Columbia College joins many other institutions on the vanguard of a movement for more LGBTQ awareness and inclusion. In addition, major media outlets are following suit with expanding their usage of pronouns. According to the American Copy Editors Society’s annual conference this year, there is a growing trend toward accepting “they” as a third-person gender neutral pronoun.

Yet, despite recent gains made on campus and the growing visibility of transgender issues in the media, there continues to be a need to expand public awareness on and off campus. Student Emily Hodshire, who serves as the political chair of Common Ground (the college’s LGBTQ and ally student organization) is pleased with much of this progress, but still sees room for improvement.

“Some faculty and students are very inclusive and understanding of LGBTQ students,” they said. “But I don’t feel like the campus as a whole supports us.”

That’s one of the reasons the pronoun awareness effort started before the semester began this year, using name tags with a section for chosen pronouns and all orientation leaders being informed of the importance of pronoun usage.

“With our high visibility during orientation and convocation, students in the incoming class hopefully are very aware of the many resources on campus for LGBTQ students,” said Lex Lawson, coordinator of LGBTQ Culture and Community and advisor for Common Ground.

“We have a really active campus community here,” they added. “The more people are engaged with activism the more that kind of consciousness infiltrates their art-making practice. Columbia draws students who want to have a more nuanced and conscious approach to their artwork and their practice.”

To provide additional support to the pronoun awareness effort, Mark Kelly, vice president of student success, recently announced that all faculty and staff are not only encouraged but expected to honor a person’s gender identity and gender expression. The new pronouns follow other initiatives including: preferred names in all internal documents (including class lists); gender-neutral or mixed-gendered facilities (such as bathrooms and dorms); and chosen pronouns in one’s email signature.

The gender initiatives page is a resource for those interested in information about LGBTQ issues. In addition to downloadable templates for gender inclusive nametags and buttons, the page provides a primer on how to address preferred pronouns in and out of the classroom, as well as a very helpful webinar.

The pronoun initiative involved a campus-wide collaboration between many departments including LGBTQ Culture and Community, Student Success, Residential Life, Student Communications, Center for Innovation in Teaching Excellence (CiTE) and Enrollment Management. It’s also a part of the overall Gender Inclusive Initiative, which stemmed out of the 2012 LGBTQ Campus Survey and the addition of “gender identity and expression” to the non-discrimination policy in 2013.

For more information visit the Multicultural Affairs page and check out the many events celebrating LGBTQ history month.