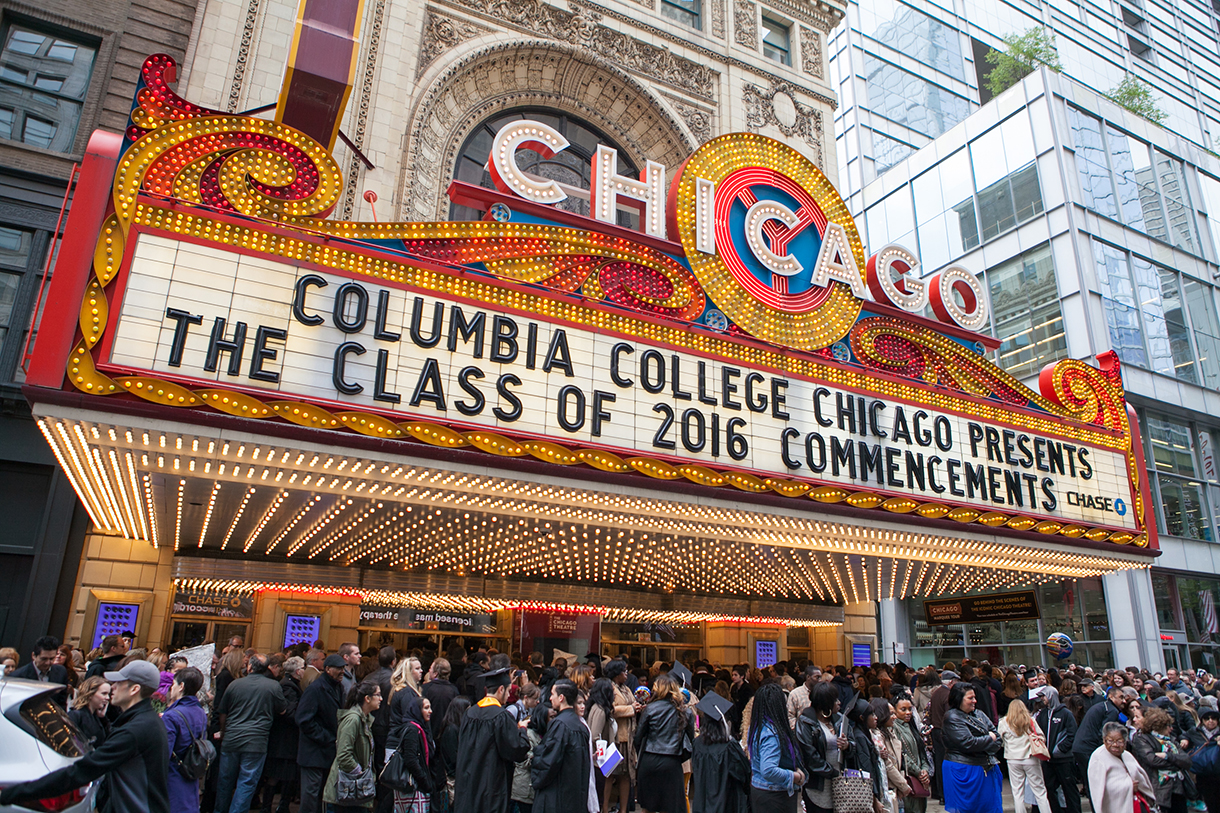 Photo: Phil Dembinski (BFA '08)
The class of 2016 was treated to a host of student performances and dynamic speeches.

Columbia College Chicago’s 2016 commencement ceremonies brought down the house five times over the weekend at the Chicago Theatre. Honoring more than 2,000 graduates, each performance and speech was an authentic testament to the creative power and ambition of our spirited Columbia community.

Highlights of the speeches, and links to their full addresses include:

Columbia President Kwang-Wu Kim, who at each ceremony, connected the current state of our planet to Columbia students. “It does seem that the world has become a darker place,” Kim said. “So, what do we need? Well…we need superheroes.” His speech likened Columbia’s student achievements to super powers, and included his annual call and response segment, “Yes I Will.” Dr. Kim ended the speech on a resonant note: “Have faith in the goodness and bounty of the universe, and let your courage surface.”

Writer and Pulitzer prize-winner Tracy K. Smith spoke on her memories as a student, specifically the emotions she experienced when transitioning from an MFA program to a professional writer: “On the brink of that kind of freedom, I found myself gripped with a mix of joy, pride, possibility, capacious hunger, and crippling fear.”

Emmy and Golden Globe Award-winning actress and former Chicagoan Jane Lynch brought on the humor, arguing against recurring themes in commencement speeches like belief systems, setting goals, and giving back. “As I stand here before you today,” Lynch said, “possessed of all the wisdom and experience accumulated over many more years of life than any of you, I can firmly state that I am against all of these things.”

Saturday night graduates heard honoree Diane Warren proclaim that if her college was as cool as Columbia, “I wouldn’t have dropped out!” The Songwriters Hall of Fame inductee and Grammy Award-winning Warren performed her song “I Was Here” with Columbia students as part of her address.

Columbia alumnus Paul Garnes (BA ’96) reminisced on his life as a Columbia student before he was producing films such as the Academy Award-nominated Selma. “You see you don't have to try and figure out how to get started, because you already have," he said. "You've been a creative being for as long as you can remember. A deep thinker. An artist."

Carlos Tortolero, founder and president of Chicago’s National Museum of Mexican Art – the first Latino museum accredited by the American Alliance of Museums – gave an impassioned speech on Sunday afternoon that was unwavering. “You should create a society that understands that we’re all in this together.”

Thank you to all of the faculty, staff, and students who performed and attended the ceremonies, and congratulations to all of our graduates. We can’t wait to see what you do!

For more photographs from the ceremonies, visit Columbia's Facebook.

Interviews with this year's honorary degree recipients can be found at ColumbiaCollegeChi.