Classroom Stories: The Day After 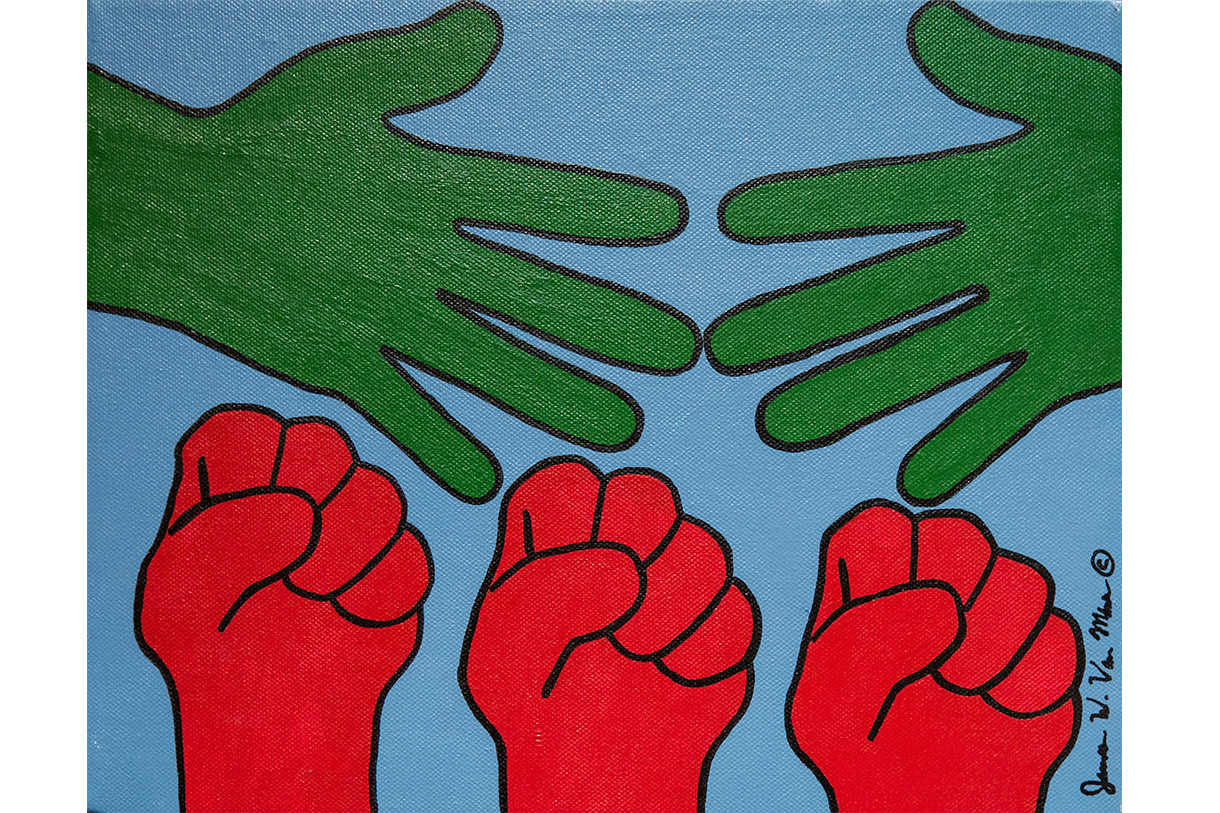 The Columbia community responded to the results of the 2016 general election in ways as varied as the campus itself. For academic leaders, the day kicked off with a heartfelt address from the Provost at Chairs Council. For faculty and students, the day was inspired by each other.

We are grateful for their stories, their insights and for sharing them with the campus community.

Provost Stan Wearden addressed the Chairs Council on November 9. Below is an edited excerpt from his statement.

There are numerous toxins at work in our culture. Racism, misogyny, xenophobia and more, all of which found an opportunity to become even more visible in the context of this past election. Yet, we must realize that we in higher education are the antidote to those toxins.

I think it’s important for us as academic leaders to continue to build optimism and courage in the face of all this. And to remember that there is much we can do in our day-to-day behavior to model the kind of world we hope to create: a world of compassion, justice and equity.

It’s important to remember that progress is not linear and it never has been. Our country has huge problems that we need to solve, but we will not solve them by wishing them away. I hope that in the coming weeks and months, we all have the courage, confidence and faith in ourselves to collectively create a better world.

Sadaf Ferdowsi is a second year Creative Nonfiction MFA student and graduate student instructor. This is her second semester teaching Writing and Rhetoric.

My students come from the sprawling cities of Chicago, LA and Detroit while others hail from the small towns and suburbs scattered across Kentucky, Michigan and Illinois.

Before the election, I was worried about accidentally alienating conservative students in what feels like a mostly liberal institution. I thought about how deeply this election divided citizens among place, class, race, gender and sexual orientation, and how these same divisions could replicate themselves in the classroom. The morning after, I wondered if I had the authority to facilitate any productive conversation at all and I debated cancelling class entirely.

We went around the room briefly mentioning how we all felt. Some students shared incidents where they personally witnessed racism, deportation, and anti-Semitism. When one student mentioned “all Republicans,” another student emphasized that it’s dangerous to assume that all Republicans are the same. I was humbled and inspired to see the dedication my students had to ensure our classroom remained an inclusive and respectful space.

Our class discussion revealed something I had I overlooked: hope is not always guaranteed. The work of engendering hope is very difficult and we shouldn’t shy away from it. It’s in the hands of our students and we, as teachers, should do our best to support them with this work.

Tyler Kempf is an adjunct faculty member in Television and teaches in the Comedy Studies program.

Each semester, the students in the Writing Comic Scenes class are given an assignment to perform the first ten minutes of an original late night talk show. The students work in small groups, with one student in each group taking on the role of the host. They work together to write monologue jokes, desk bits and other segments that showcase the host’s comedic sensibilities. This semester was unique because this particular assignment fell on the week of the election. One cohort in particular had the difficult challenge of performing their pieces the morning after the election. Knowing the results would effect their pieces, a majority of the cohort got together to watch the results and finish their projects on Tuesday night.

Needless to say, the night did not go as planned. Most of the groups had written a majority of their content with the idea that Hillary Clinton would win. From what I’m told, the night began with a jovial mood in the room, but as the event progressed, the humor became difficult for them to find.

At the end of the evening, the cohort broke off into their smaller groups to discuss how they would incorporate the unexpected news into their projects.

Much like a majority of the country, it was a long night for the students.

We convened at 9am on Wednesday morning. Rather than jumping in to the performances, like we normally would, we had an hour-long dialogue about the results, what it means for our country and how we will move forward. We all shared tears, concerns, fears and a few laughs.

After a short break the students began to perform their pieces. All of the students made some incredible choices. Rather than go for laughs at the expense of our new President-elect, they chose to get laughs by subverting the genre of late-night television. Some pieces were meta and written specifically for our room while others were polished and ready to go on air right then and there. Each group had very funny pieces and each group earned a moment where they were able to be honest and open about where we are as a country. They chose to inspire hope encouragement and strength.

It had been less than 12 hours since the results of the election and these students were making insightful, comedic political statements that the entire country needed to hear.

At the end of the class, many students opened up about how cathartic the past four hours had been and how, for the rest of their lives, they would always remember the night of the 2016 presidential election and the morning that followed.

JT Lachausse is a junior in the Fiction program who was in Sharon Powell’s Women’s Health Care Issues class the morning after the election.

On Wednesday morning, professor Powell opened up the class by asking, “So, who needs to ‘check-in’?” Most of us were sunken-eyed and quiet. This was not the usual class atmosphere. Women’s Health Care Issues is typically energized and chatty, even at nine in the morning. But most of us were drawn into our phones, scrolling down our Facebook and Twitter feeds.

Mrs. Powell was still confident as ever, but you could see that she, too, was bothered. When she spoke about Donald Trump, she sustained an academic position: “How does this affect our approach, or the issues we’re studying in this course?” “Well, that’s Mr. Trump as an individual. But what about the Republican platform? Someone pull that up, let’s read into this.”

“What do we do now?” That was the big question. Most female-identifying and LGBTIQ students expressed worry about their safety, and there was a focus on sexual assault. “If the President can say what he’s said, do what he’s done – what’s to prevent others?” We decided that the angle of our coursework had shifted; the uphill battle for equality had gotten more steep, but that we need to charge faster.

The premise of this question in many ways belabors a preconditioning -- that there is a reason why there is something to talk about. Having said this, it is evident that this community of students is hurting. I personally felt it was important to address this issue in my really diverse Global Reporting class, rather than simply barrel through the last remaining weeks of the semester with the attitude of business as usual.

Mirroring my stance about the inherent bias in the need for this discourse was a student's emotional response: "It hurts that you are asking this question." Going on to clarify that it was not directed at me, but at her new reality. Finding it hard to plough through this week, she was teary eyed as she conveyed how as a first generation Latino-American, she is scared to find herself and her family suddenly and overtly singled out in hate rhetoric engendering panic and fear.

This was echoed by an Asian international student from China and many others in the class. As a teacher and as a world citizen I first listened, and then sought to help them understand that here was an opportunity to empathize with and understand 'otherness.' A global world view diminishes limited perceptions and the time has come to challenge our own perceptions of otherness. An open and sensitive discussion and sharing made this a cathartic moment with some tears and lots of hugs.

Louis Silverstein is an associate professor of Humanities, History and Social Sciences. He spoke to two sections of his Peace Studies class on Wednesday.

Most of the students were dismayed and upset about the results. I asked them to share why they were upset. I felt my responsibility to place the election in a larger, historical context. I reminded them that eight years ago, Barack Obama was someone vying for office whose chances many considered to be simply impossible. After he won, some people were disdainful, angry and upset. Those people organized and worked for eight years to work toward fundamental change in this election.

Well, what does that show us? It shows us that if in the U.S., which is a democracy, if you wish to bring about change it is certainly possible.

I wanted to give my students the opportunity to share whatever emotions and opinions but not to stop there. It’s also necessary to do something. I reminded them of a quote that I use quite often in my classes: “don’t tell me what you believe, tell me what you do each day and I’ll tell you what you believe.” If you really believe that what has occurred is not good for you, good for the people you love and care about, people you identify with, or the country—then act. We have to heal our wounds and then look to the long term in order to bring about change.