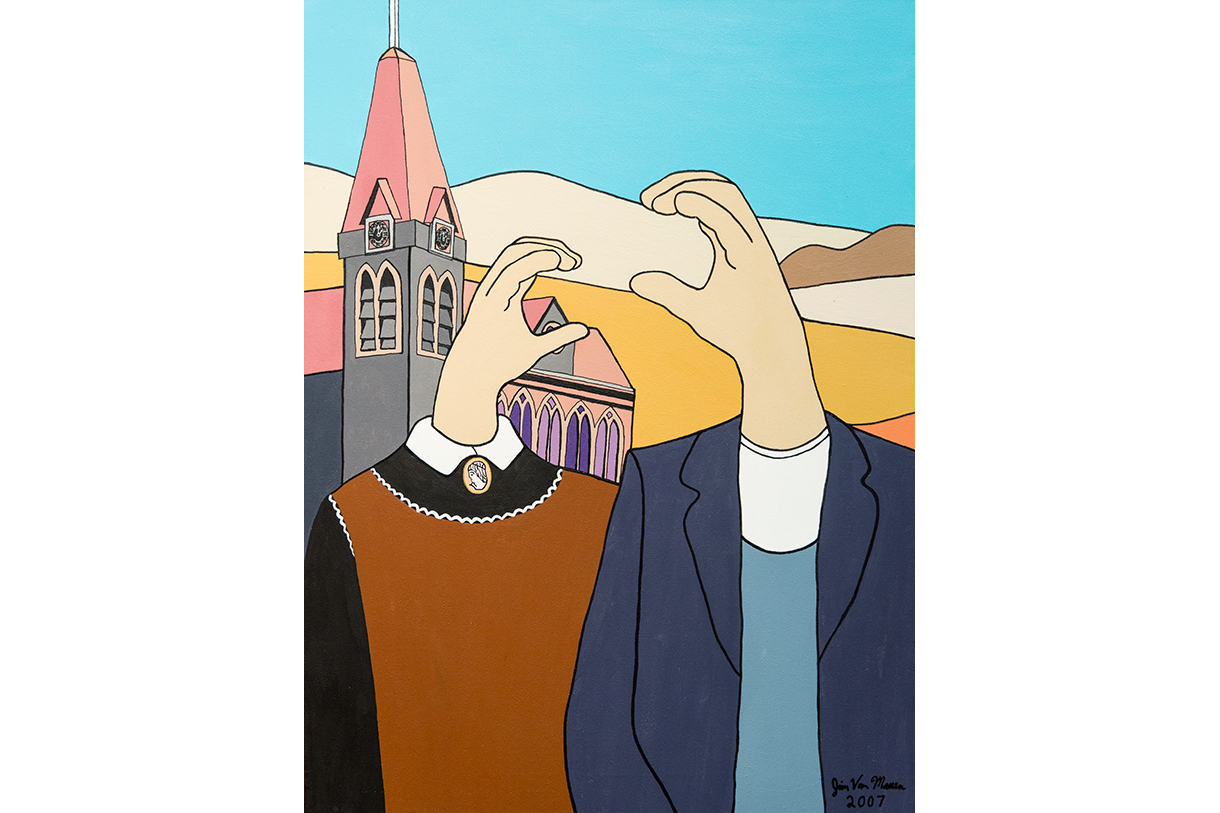 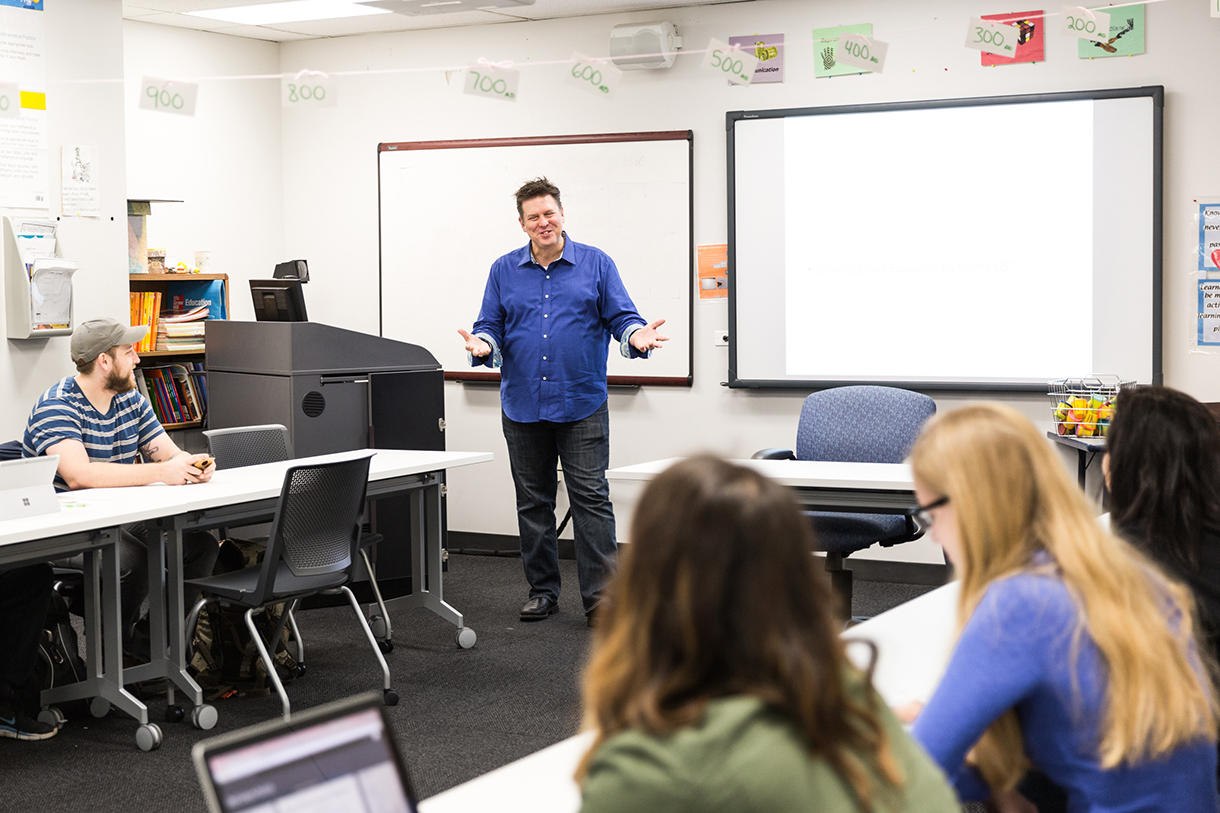 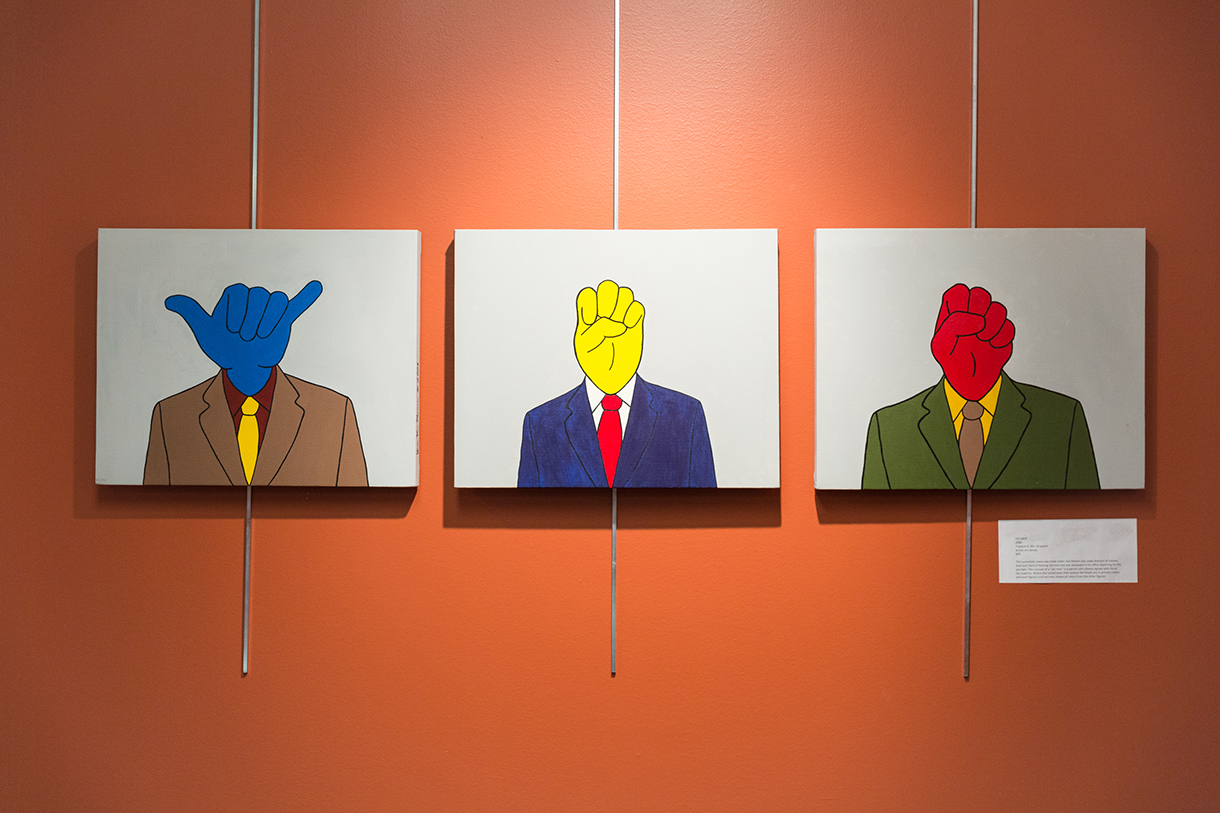 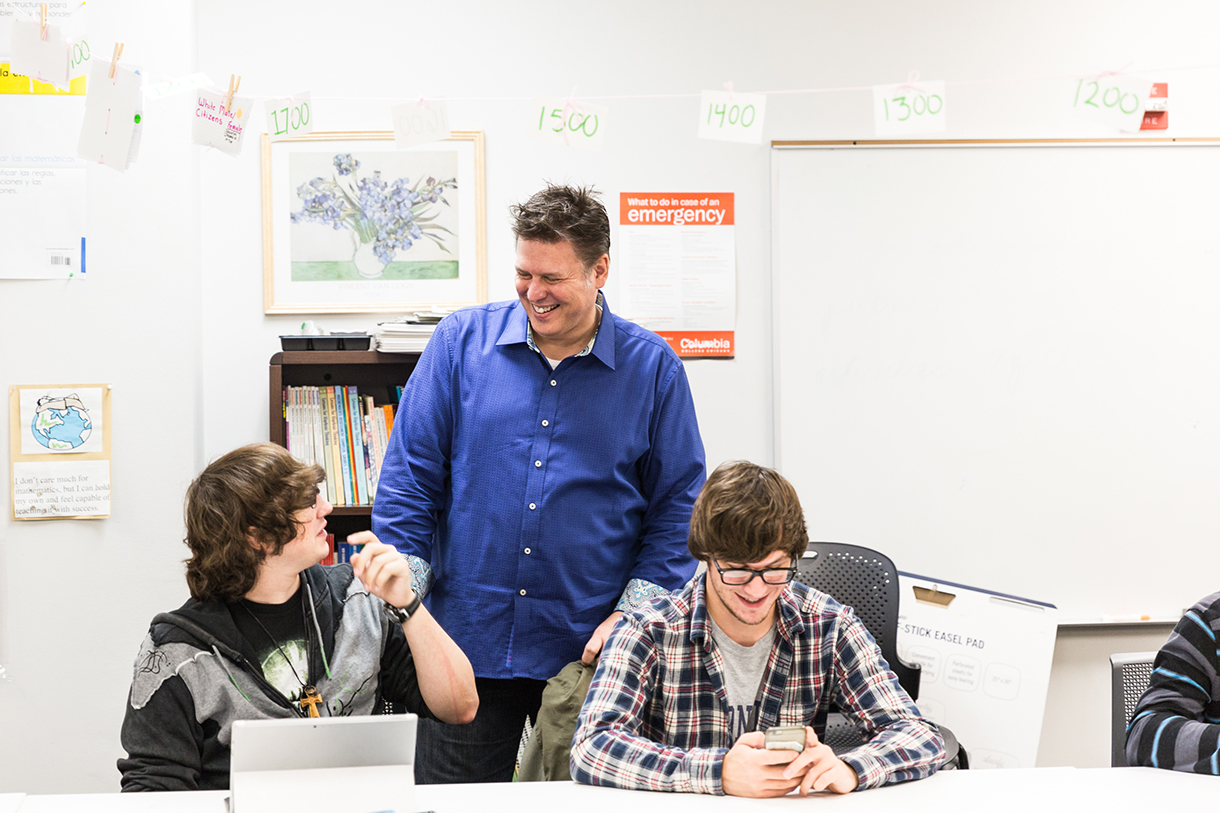 Photo: Phil Dembinski '08
Associate Professor Dr. Jim Van Manen explores the intersection of visual art and Deaf Culture in preparation for the "In the Eyes of Deaf Artists III" exhibition.

Associate professor in the American Sign Language (ASL) department, Jim Van Manen, PhD, grew up bilingual as a child of deaf adults (CODA). “I learned Deaf Culture at birth,” he says. Deaf, with a capital “D,” refers to people and culture, while a lowercase “d” refers only to the inability to hear. “I struggled with English and what we in the Deaf community call ‘hearing culture’ more than I ever struggled with Deaf Culture at home.” This impact has taken shape in many ways, and one of them is visual art.

While Van Manen teaches a number of courses at Columbia – ranging from ASL Fingerspelling to Deaf Culture – he currently teaches Deaf Art Movement/De’VIA: Discussions with Deaf Artists, a course focused on artists working within the De’VIA perspective. Van Manen describes the De’VIA movement as “art that is made from the experience of being Deaf, extended to include others who have perspectives that relate to being Deaf.” The movement formalized in 1989 days before the Deaf Way arts festival at Gallaudet University, Van Manen’s alma mater.

“The term De’VIA has been applied ever more widely to non-visual artistic genres,” Van Manen says. One artist studied in the course, Alex Wilhite, visits schools for the Deaf and collects dust and dirt to place in his work. Another artist, Tony MacGregor, creates what he calls Southwestern De’VIA. He uses southwestern themes and images tied with ASL signs to create carvings and paintings on gourds or gourd paper.

But Van Manen isn’t just an expert on De’VIA, he’s a participant too. In his paintings he uses pop art aesthetics and employs iconic images that differ from language to language. His work EMERGING PEACE depicts the peace symbol and the gesture for a gun that Deaf people sometimes first identify as relating to the ASL alphabet. “It is a statement about the fact that peace seems to always exist in an environment of war.”

Is De’VIA something audiences can expect to see more of? “De’VIA is healthy in Chicago,” Van Manen says. But he sees many ways in which hearing culture can improve on its inclusion. “What we lack is the opportunity to show the work and explain it to various audiences.”

A lack of De’VIA venues is emblematic of a much larger challenge. “Because many hearing people don’t recognize they have hearing privilege, they function frequently in a way that views being Deaf as a tragic circumstance.” Van Manen doesn’t shy away from asking the difficult questions surrounding the lack of acceptance of Deaf people as a cultural group. "Deaf people have said they want is to be accepted on their merits, not identified only for being Deaf. When will we see a Dean or Vice President or President who is openly Deaf? And when will such be considered vital to an expression of diversity?”

Viewers can get a sense of De’VIA at this weekend’s ColumbiaCrawl: In the Eyes of Deaf Artists III, where Van Manen, faculty, staff and other Deaf artists will have work on display as part of Columbia's WAC Crawl.