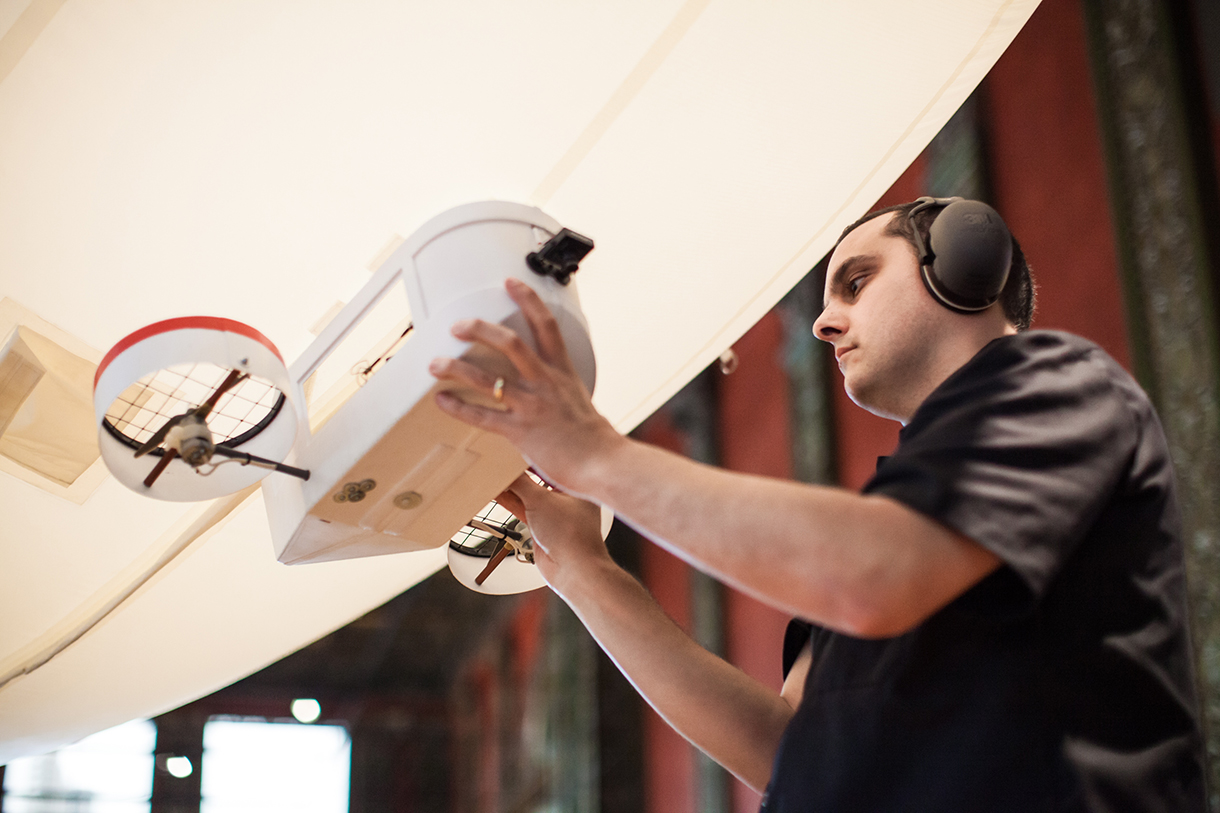 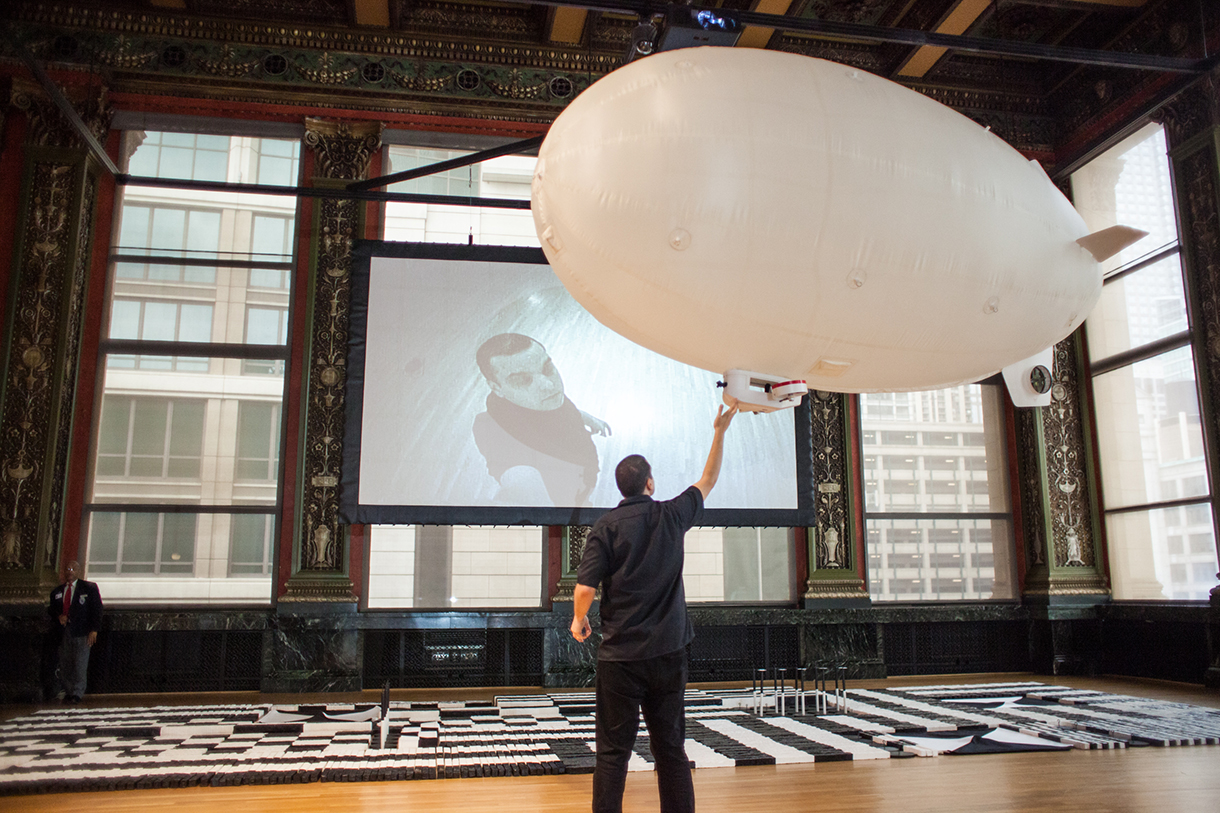 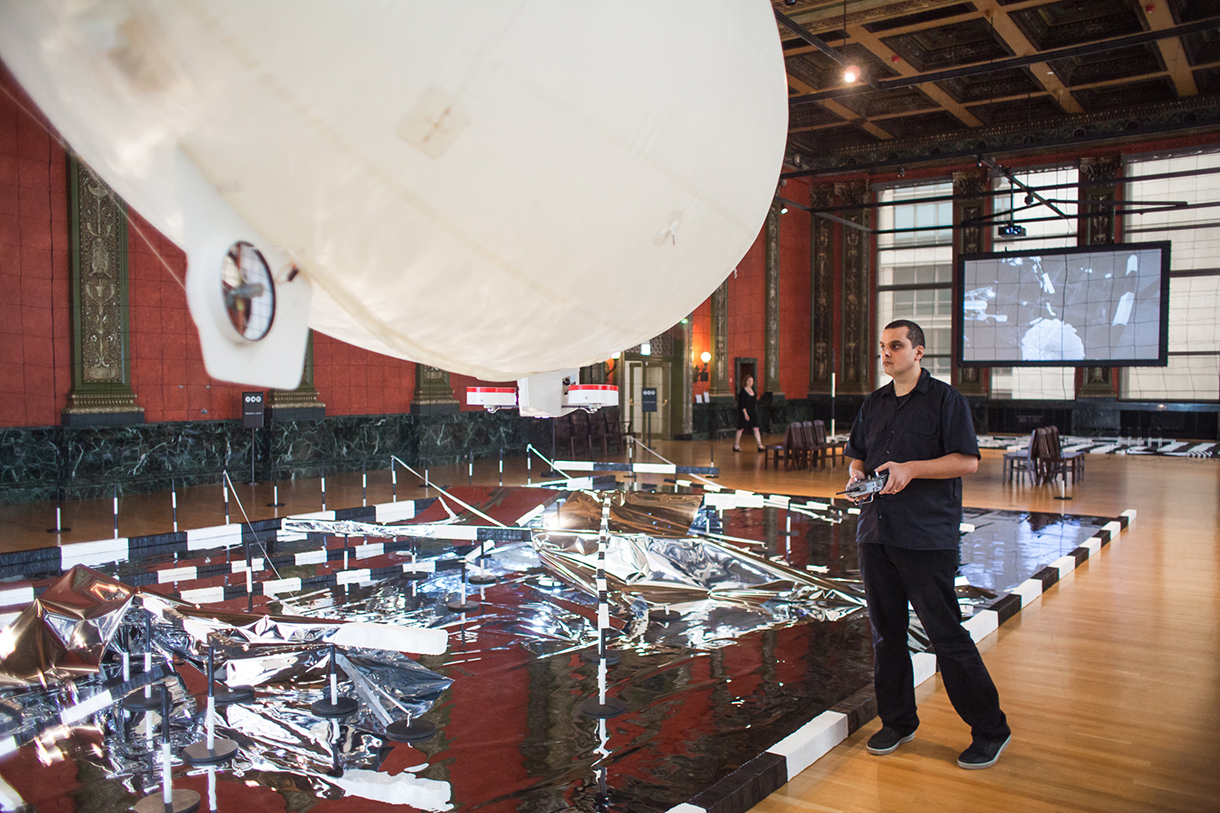 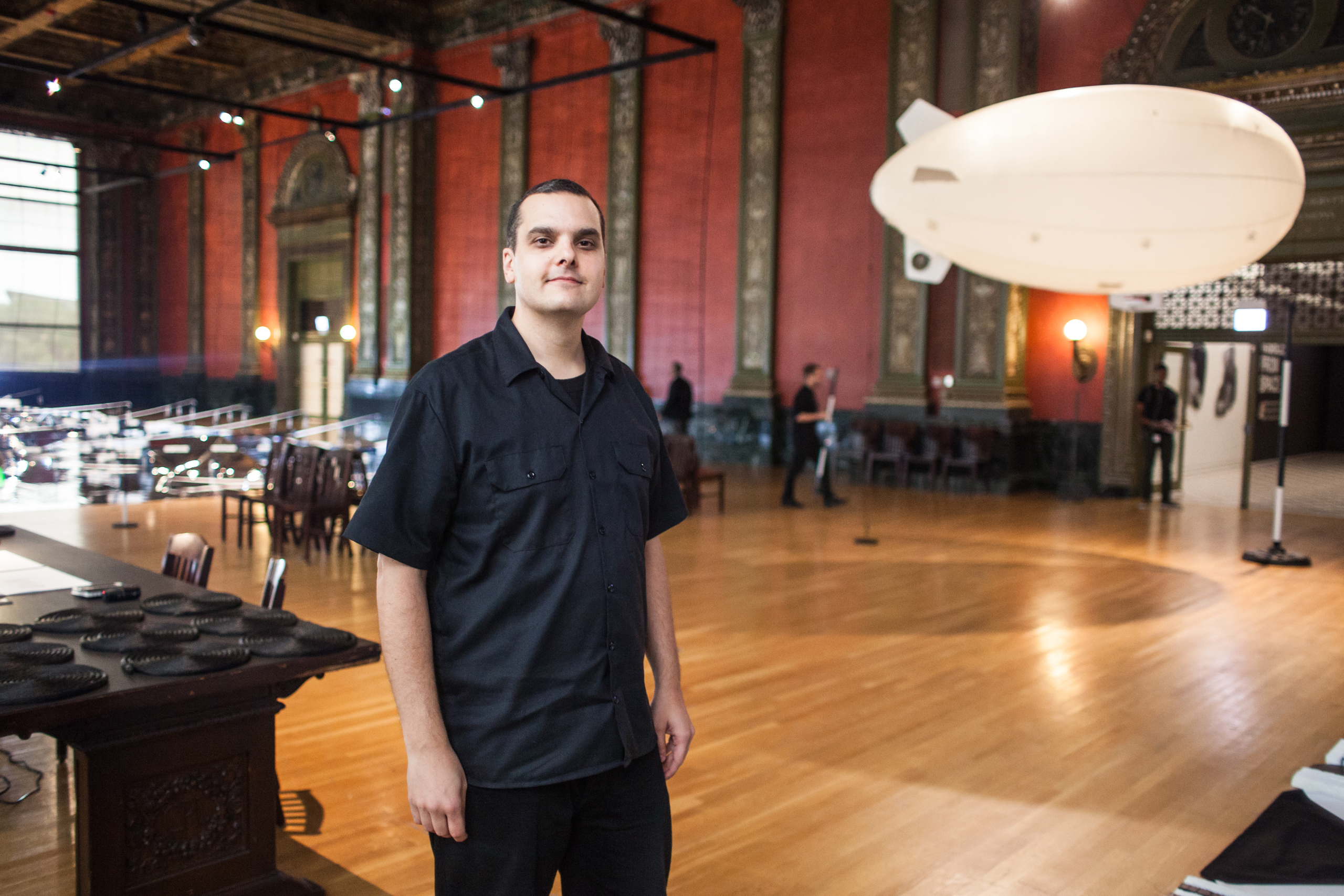 Photo: Phil Dembinski '08
Director of Graduate Studies for Art and Art History and Associate Professor Paul Catanese’s "Visible from Space" is on view at the Chicago Cultural Center.

Visible from Space is a “thought experiment.” It is an “open series.” It wants to move far beyond popular misconceptions about space. It is an ongoing exploration of and through materiality. It is a work by an artist taking a giant step.

Paul Catanese’s Visible from Space began with a question: how large does something need to be on Earth to be visible from outer space? Catanese, associate professor and director of Graduate Studies for the Art and Art History Department, takes a complex interdisciplinary approach to the question. Visible from Space incorporates video, relief prints, installation, projection, handmade paper, artist’s books, found objects, field notes, interviews, essays, improvised music, site specific events and, why not, a 12-foot blimp equipped with a camera. He uses this wide variety of material to explore the multiple ways we see objects and ourselves.

The show, currently on view at the Chicago Cultural Center, is a unique blend of exhibition and residency. Because the Cultural Center functions similarly to the Kunsthalle model, Curator of Public Art Wendy Miller tailored an environment specific to the exhibition. “It’s fitting for [us] to present work that very naturally blurs boundaries across not only artistic disciplines, but the contexts in which they’re presented,” says Miller.

Catanese spends 40 hours a week in the gallery working and revising his exhibition with open curiosity and scientific precision. Three times a week, Catanese flies a camera-equipped blimp in the gallery to record an aerial view of one of the main elements in the room, an ever-evolving “landscape” of large black and white diagrammatic marks and reflective material culled from the artist’s own reference library of images.

He requested to work on the fourth floor of the building (which previously housed the reference section of the Chicago Public Library) in order to reactivate a space originally conceived as a site for public knowledge. He engages with more than 300 hundred visitors daily through discussions, performance and social media. Visit the sight more than once and notice that Catanese has not only adjusted the artwork but also rearranged the chairs from which to view the work. He thinks of Visible from Space “not as unfinished, but processing—like a system, in public.”

This fall at Columbia, Catanese is teaching a course on Public Art. Since much of his current work collapses the barriers between private studio and public exhibition, he is thrilled to continue the conversation with students about the many facets of public art.

Like many artists who are educators, Catanese finds ways of balancing creative pursuits with academic and administrative demands. He was able to complete this project with support through a Columbia faculty development grant and in-kind resources from the college. He also received the prestigious Efroymson Contemporary Arts Fellowship. Catanese cites these kinds of institutional support channels as crucial for artists like himself to embark on such risky projects. “I think of Columbia and myself as collaborators. Together, we have to ask how we can help one another move culture forward.”