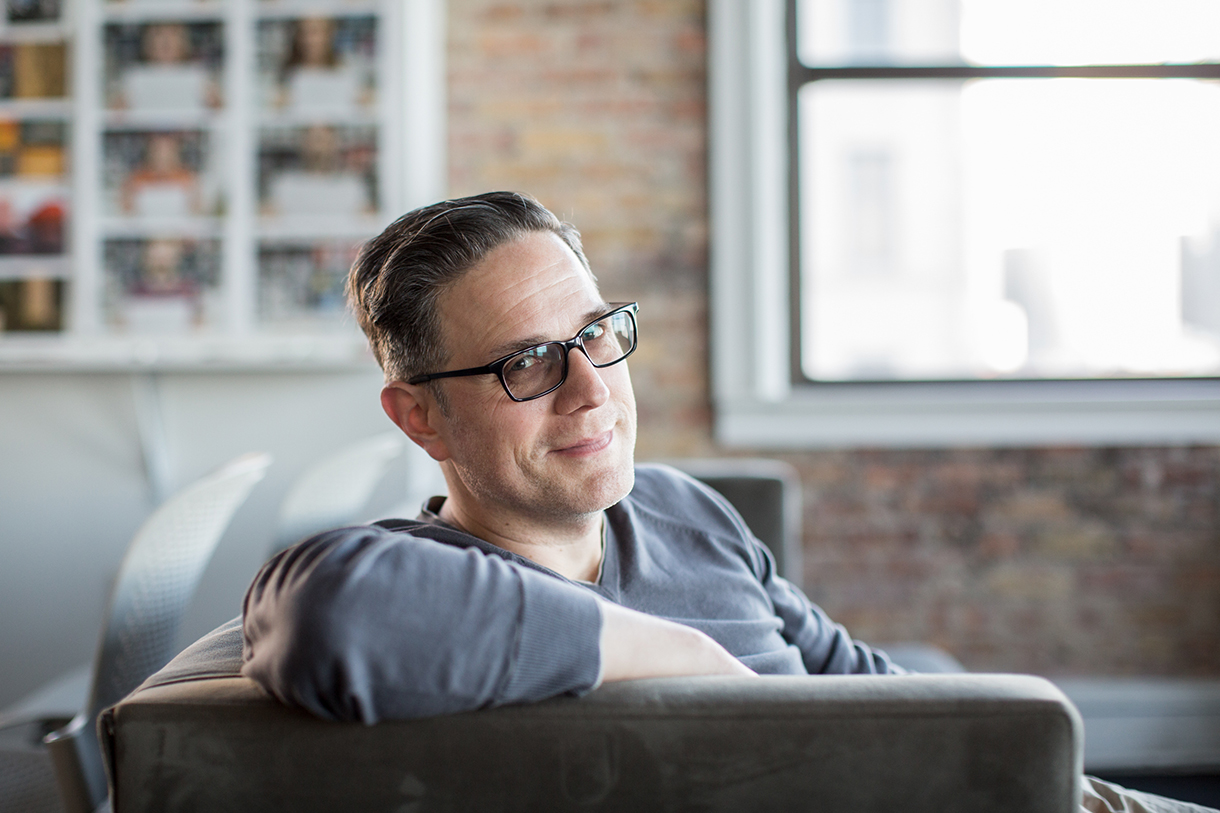 “They thought I was a white guy doing it,” says Edward Thomas-Herrera, commenting on a heavily-accented character he invented for a show. An audience member complained that the character’s accent (based off his Salvadoran mother) was racist, and his character was cut.

Thomas-Herrera, who identifies as Salvadoran-American, has been writing, directing and performing in theatre for more than 20 years. He supports his artistic endeavors by working full-time as a Project Manager in the Strategic Marketing and Communications Department, but his humor, flair and intellectual insights into the dynamics of the human condition are woven in all he produces at work and on stage.

His most recent performance, Warman’s Practical Orthoepy and Critique, which recently wrapped at Lakeview’s Stage 773, is a timely collection of monologues from the performance group BoyGirlBoyGirl, which Thomas-Herrera co-founded and has been a part of for 12 years. He jokingly refers to them as “Chicago’s favorite solo performance collective.”

“Nobody really calls us that, but I wrote it in a press release once and it got printed in a listing,” says Thomas-Herrera. BoyGirlBoyGirl also consists of Diana Slickman, Rachel Claff, David Kodeski and Theatre faculty member Stephanie Shaw. The group chooses a piece of text for inspiration in crafting their separate monologues.

Warman’s appealed to the group because of its confident brand of self-improvement through pronunciation. “As writers in our 50’s, we’ve often found ourselves witnessing the way language has changed for better or worse – and Warman’s reminded us that, at one time, it was WE who were the linguistic scofflaws.”

The group’s success comes from their commitment to workshopping each others’ writing. “When you write by yourself you get lazy. Having four people who’ve heard my familiar jokes recognize when I’m being lazy and call me on it. That kind of feedback makes me work better.”

In Warman’s, Thomas-Herrera uses his stage time to re-explore his previously cut character, responding to those critics who tried to define him so narrowly. “The piece I wrote [for Warman’s] was my opportunity to deliver the response of how I created the character and how I enjoyed performing it.” While the group chose Warman’s as their inspirational jumping off point months before the election, the topicality of language, race and identity politics rose to the surface. “We underline our deeply personal connection to and stake in our choice of words whether they’re used in business, art, politics or ordering a simple cup of black coffee.”

In Slickman’s’ monologue for Warman’s she discusses the code-switching rhetoric of Donald Trump. During the first performances, Slickman's piece struck the audience as absurdist humor, “everyone was bemused and frustrated,” says Thomas-Herrera. But during the second set of performances, which took place this past weekend and post-election, Slickman’s tone changed. “Diana’s voice got very quiet and she seemed to speak from a place of real pain. It was difficult to end the show on that note – but in all honesty, there was nothing we could have done to follow such a piece, so it had to go at the end.”

Whether inspired by pop culture or guides to proper pronunciation, BoyGirlBoyGirl performances often tackle tough issues in funny ways. “We’ve always used humor to avoid sounding like scolds or coming across too preachy. No one likes getting yelled at – even folks who deserve it.”

EDWARD THOMAS-HERRERA is one of the founding members of BoyGirlBoyGirl. He has authored three plays: Of Diamonds and Diplomats, Mondo Edwardo, and Death on a Pink Carpet; a one-man show Fun while it lasted: a farewell tour, and Hell Is For the Very Hot, a musical that will probably never, ever, ever see the light of day. His directing credits include Stephanie Shaw’s Materia Prima, David Kodeski’s And Some Can Remember Something of Some Such Thing, and Mary Scruggs’s Missing Man, not to mention Mr. Kodeski’s more recent collaboration with Naomi Ashley True Life Tales form the Honeymoon Capital of the World (some of which are true).

As an actor, he has appeared in Curious Theatre Branch’s production of Barrie Cole’s Clumsy Sublime and Live Bait Theater’s production of Sharon Evans’s Portrait of a Shiksa. He received his bachelor’s degree in Musicology from Rice University in Houston, Texas. He’s been performing since 1991 and does not do windows.