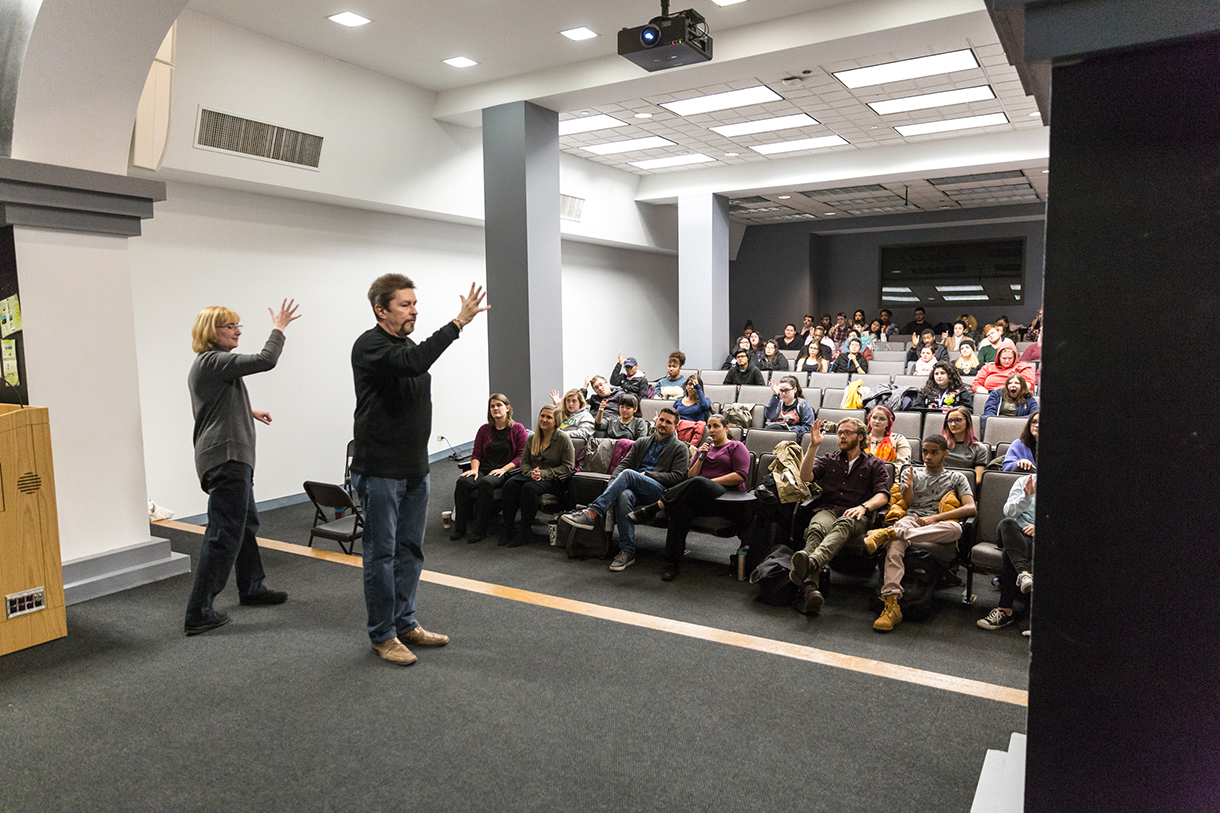 Peter Wujcik (center), a Deaf Teacher’s Assistant for the course, spends 15 minutes of each class to do “Signing with Peter” in which he introduces basic ASL to the class. Photo: Phil Dembinski '08 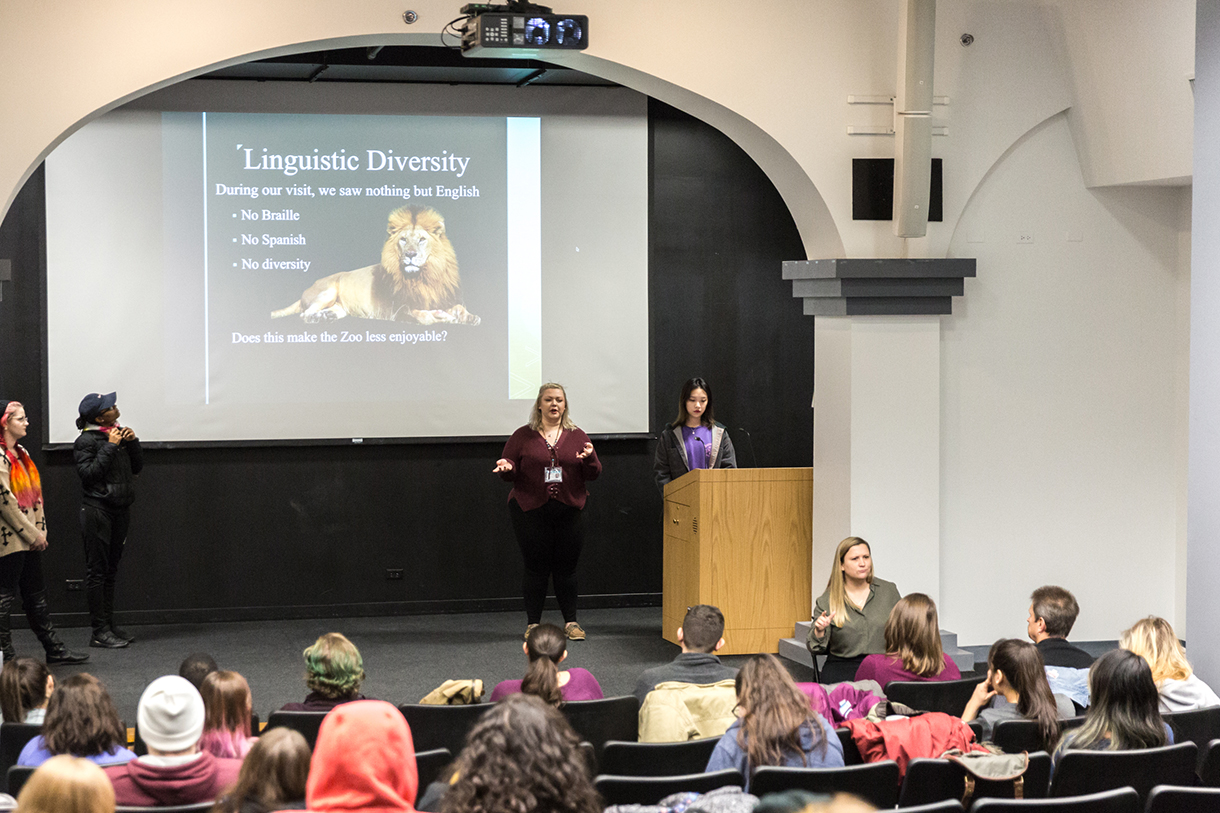 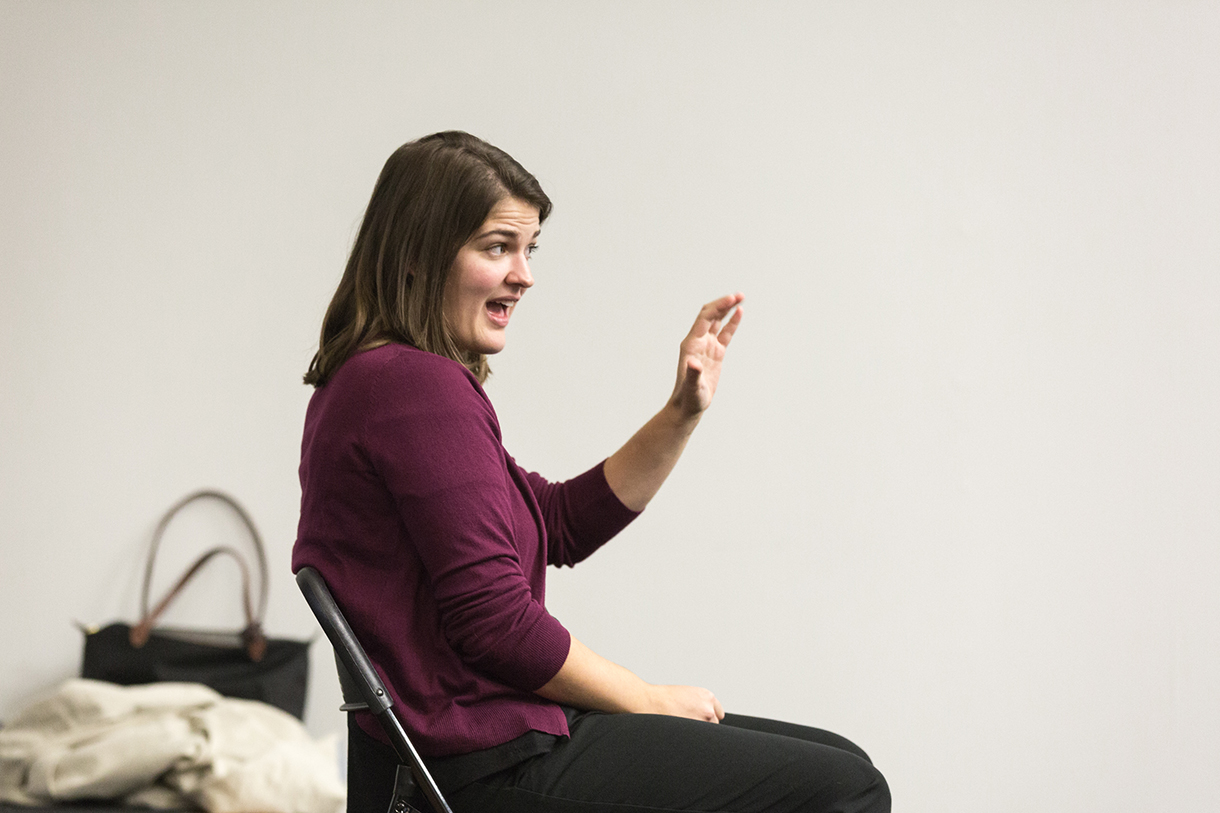 In the first moments of Todd Haynes’s new film Wonderstruck, closed captioning appears unexpectedly on the screen. In an episode of Master of None, when a character encounters a Deaf cashier, the audio completely drops off for eight silent minutes.

In these instances, hearing audiences are forced, however briefly, to experience the world the way a Deaf person might. For ASL Associate Chair and Associate Professor Diana Gorman Jamrozik, these momentary ruptures for hearing audiences give her hope: “Just being exposed is good because it raises awareness immensely.”

Gorman Jamrozik teaches a “Big Chicago” ASL class that is neither an ASL interpreting course nor a Deaf Studies course. Instead, Gorman Jamrozik invites her students to explore ASL the way one would any other language. As a hearing person and a linguist, her approach is equal parts accessible and academic, and it’s evident in the course’s title: “Did You Just Flip Me Off? Deaf People and Linguistic Diversity in Chicago.”

Gorman Jamrozik’s deep interest in ASL can be traced through her own education. When she was a student at Hersey High School in Arlington Heights, there was a Deaf students cluster program. Along with their classes in ASL, the students were mainstreamed into classes and utilized interpreters. “I was the student always staring at the interpreter,” says Gorman Jamrozik, who’s always had a passion for languages. Her father was a Latin teacher and she went on to pursue Russian Studies and History as an undergraduate. Eventually, she received two master’s degrees, one in Interpretation and another in Linguistics. 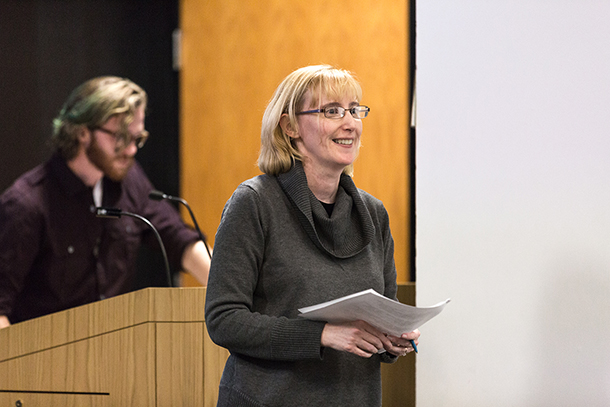 In the second week of her “Big Chicago” course, she has her students navigate parts of Chicago with earplugs or noise-cancelling headphones. With their auditory experience muted, students become differently attuned to their surroundings. “Doing things like crossing the street, they really learn how much they rely on sound and it makes them think about their privilege and their relationship to the public.”

For a city as global as Chicago, linguistic diversity is baked into one’s daily experience. Riding the L exposes a hearing person to a multitude of languages. “There is no Deaf neighborhood per se,” notes Gorman Jamrozik, “but language creates community.” So, it would make sense for Chicago’s institutions to reflect and provide accommodations for the city's many communities. So, how do Chicago’s institutions stack up?

For another assignment, Gorman Jamrozik asks her students to evaluate the accommodations for ADA accessibility and linguistic diversity in various Chicago institutions such as the Museum of Contemporary Art, the Chinese American Museum, or the Jane Addams Hull-House.

“In the last 20 years, most of the major players in Chicago have made huge strides in accessibility, especially when it comes to the Deaf community,” she says. Theatres offer ASL interpretive performances and many museums offer tours with ASL interpreters. “But, we still have a lot of work to do.”

Columbia’s ASL Department, which celebrates their 25th anniversary this year, might be able to take some of the credit for the increased awareness throughout Chicago. “Columbia has always been on the forefront of trying to change the landscape. Whether they are in Interpreting or doing Deaf Studies or just interested, our students are the ones going out saying ‘you know what, I want to have a Deaf audience to this.’”

“I think we’re part of a bottom-up revolution.…But that’s how change happens. One conversation at a time.”

Students who go through the ASL program become advocates, bringing their awareness and their knowledge to their work. “Sometimes, all it takes is one person to speak up or to have a place at the table to get these small changes to happen.”

Recently alumna Shannon Moutinho ‘07, along with being a nationally certified interpreter, worked to expand ADA accessibility for Deaf and Deaf-Blind people at the Great Lakes ADA Center in Chicago. In her 19 years at Columbia, Gorman Jamrozik has seen many stories like this.

“Because of that—” her face lights up, as though surprising herself with what she says next, “I think we’re part of a bottom-up revolution… Maybe it’s a small revolution, but a revolution nonetheless. But that’s how change happens. One conversation at a time.”