What We Can Still Learn from Harold Washington 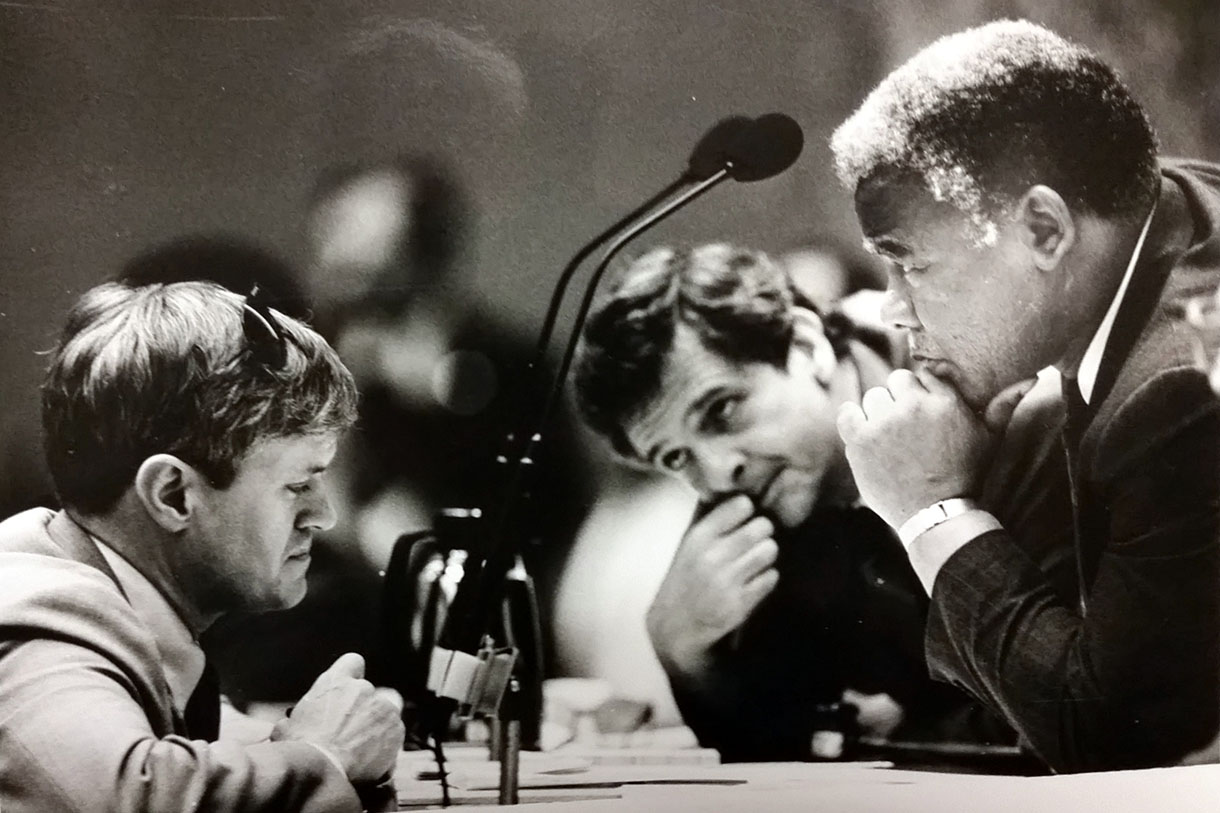 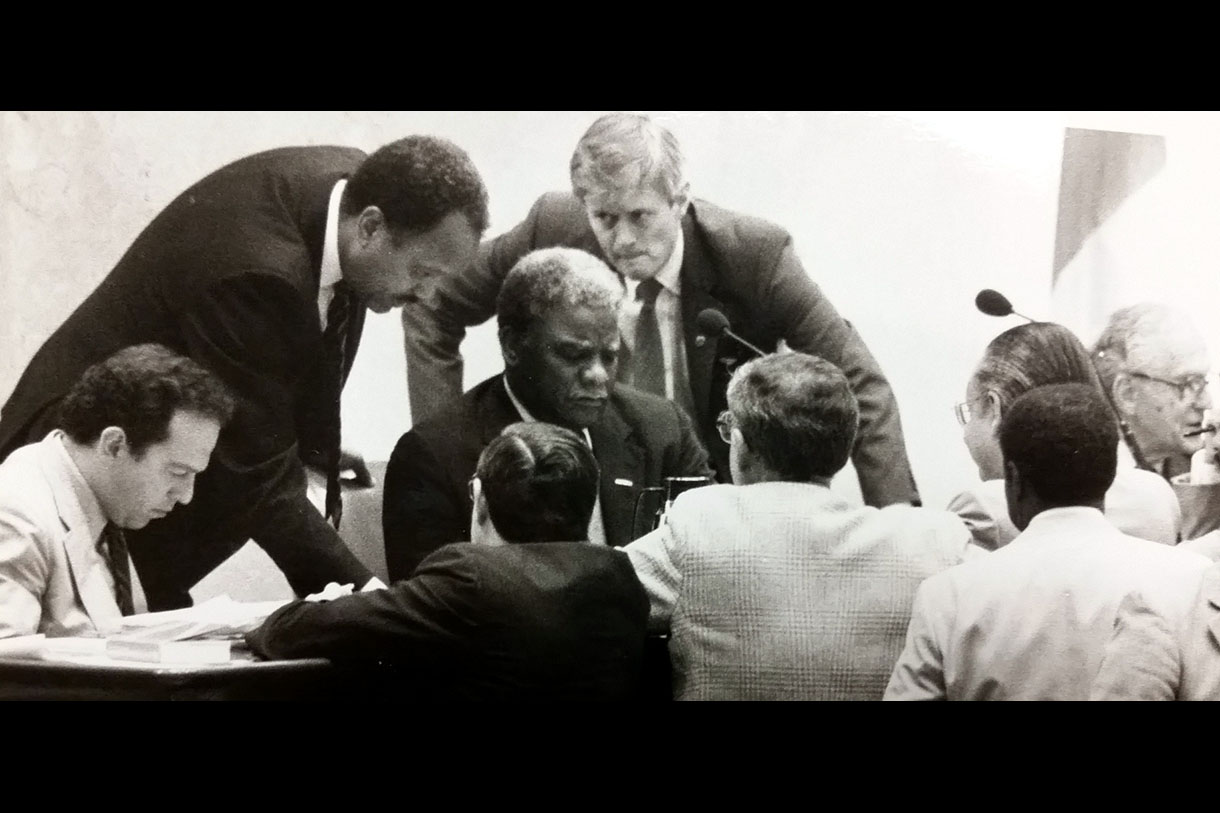 Miller joins a huddle around Washington at a City Council meeting. Photo courtesy of Alton Miller.
Associate Professor Alton Miller imparts lessons from the charismatic and revered mayor to his "Big Chicago" students.

Some moments in the 14-part documentary series Eyes on the Prize that aired on PBS from 1987-1990 look eerily familiar today. One such moment was the 1980 acquittal of four Miami-Dade police officers in the death of black Marine Arthur McDuffie, which led to the Miami riots. While not as extreme as the Miami riots, this past September protests erupted after the acquittal of former St. Louis police officer Jason Stockley in the fatal shooting of Anthony Lamar Smith. And of course, peaceful protests, like those shared in the documentary, have been the mainstay of America in recent years.

One moment in the documentary, though, highlighted a direct connection to Chicago: the election of Chicago’s first black mayor, Harold Washington. And the students in Communication Associate Professor Alton Miller’s “Big Chicago” class, 50 Years of Civil Rights in Chicago, had the unique opportunity to learn from Miller’s lived experience. Miller served as Washington’s press secretary during his time as mayor, and believes his students—and all Chicagoans—can learn from Washington’s legacy.

“With the horrific news coming out of the White House every day," he says, “there is an opportunity right now to cast [Harold Washington’s] priorities and agenda in terms that relate to what Trump is doing, and to what the pushback is doing.”

One of these opportunities, Miller says, is for lawmakers to model Washington’s political acumen. “He showed that you don’t have to give up a charismatic leadership style to legislate. As a person with a legislative background, he was all about compromise and all about talking before the fight.” 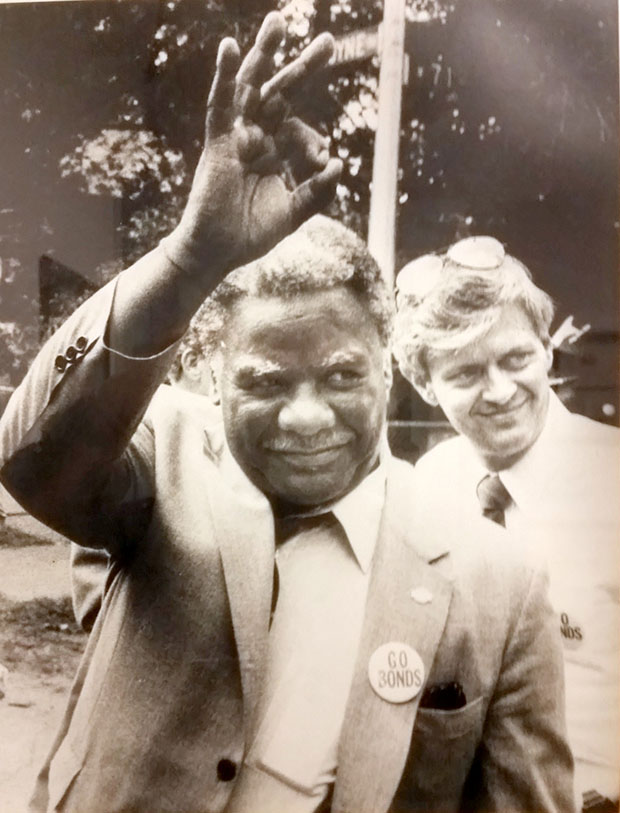 Washington was able to fix Chicago’s budget, despite the city’s Council Wars, by working with a white aldermanic majority who vowed to vote against him. Overcoming hostile opposition while staying focused on the issues was a critical part of Washington’s success as mayor. “He inherited a city that was completely in debt,” says Miller. “When he died, the city was free of debt. He believed that if you haven’t fixed the finances, then nothing else can happen.” Tragically, Washington died of a sudden heart attack in November 1987, months after winning re-election.

Miller hopes questions like these will help his students make connections between the country’s past and its current problems.

“There’s no evasion of what the gravity of these challenges is,” Miller says. “If we think it’s going to automatically get better, we’re wrong. I want my students to leave knowing that movements don’t begin on the streets or in court rooms. They happen over kitchen tables. Very few people know there’s a fight going on, unless major events end up on the front page. If my students leave here next week understanding that, then that’s what the class has been for.”