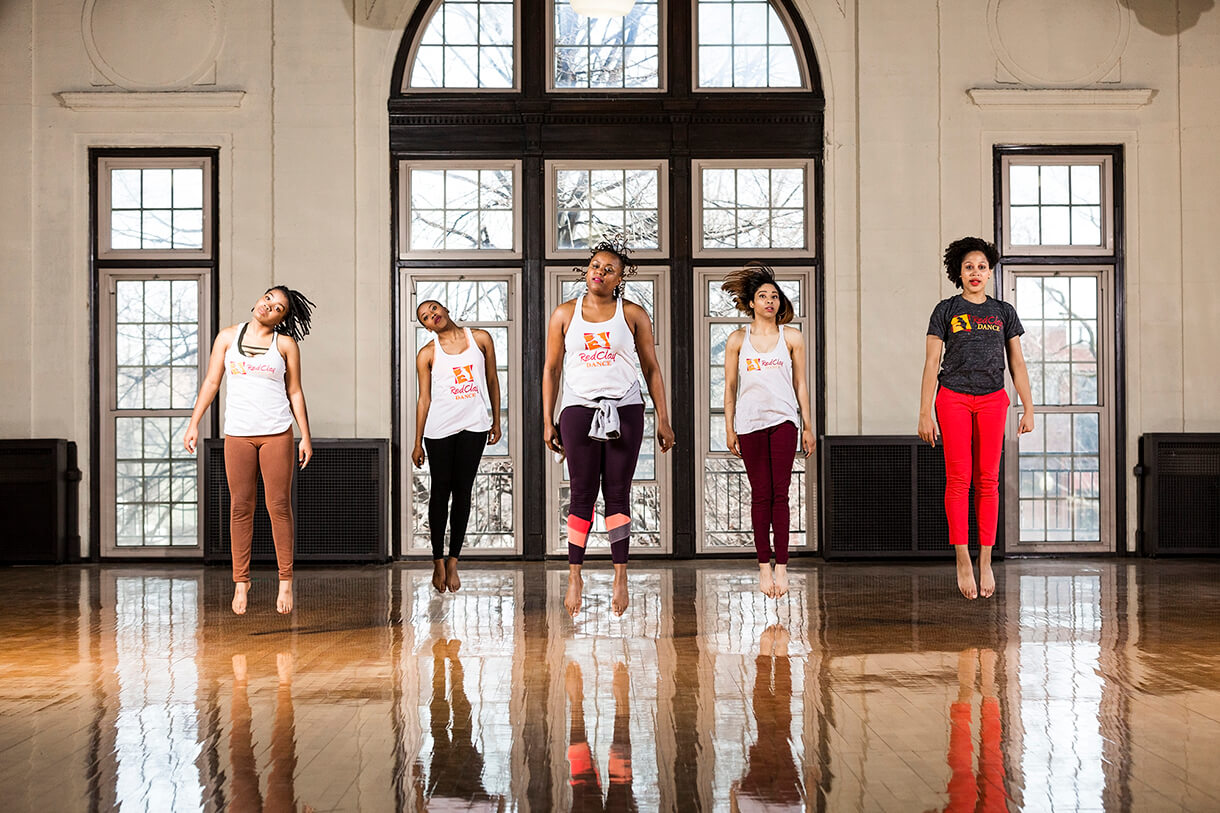 Dance can work as connective tissue between the past and present, move beyond the boundaries of culture, and bring people together on a foundational, primordial level. That’s the mission behind Red Clay Dance, a Chicago-based dance troupe focused on invoking change on a local and global level through performing and teaching the dances of the African diaspora—or, people of African origin who have dispersed to other off-continent communities but still contribute to its cultural development. Founded in 2008 by movement artist Vershawn Sanders-Ward ’02, Red Clay Dance has spent the last 10 years cultivating a unique space in the Chicago dance scene.

This year, it will complete its most exciting endeavor yet: the TransAtlantic Project, a year-long cultural exchange with choreographer Jonas Byaruhanga and the Keiga Dance Company from Kampala, Uganda. Their cross-continental collaborative performance, EKILI MUNDA | What Lies Within, premieres at The Dance Center November 8–10.

A Visionary is Born
Sanders-Ward started dancing at a young age and came to Columbia as a Gates Millennium Scholar, where she received her BFA in Dance. “I never thought about making dance a more viable [career] until Columbia, or being an instructor, but being there gave me the tools,” she says.

Sanders-Ward then attended New York University for her MFA. “I liked the idea of being in a cultural mecca. Being in a city where dance was actively happening, where there was a dance community outside of the college.” She worked on various projects and festivals across the country before going to Senegal for a two-month preprofessional certificate program at Ecole De Sables, a dance center near Dakar. 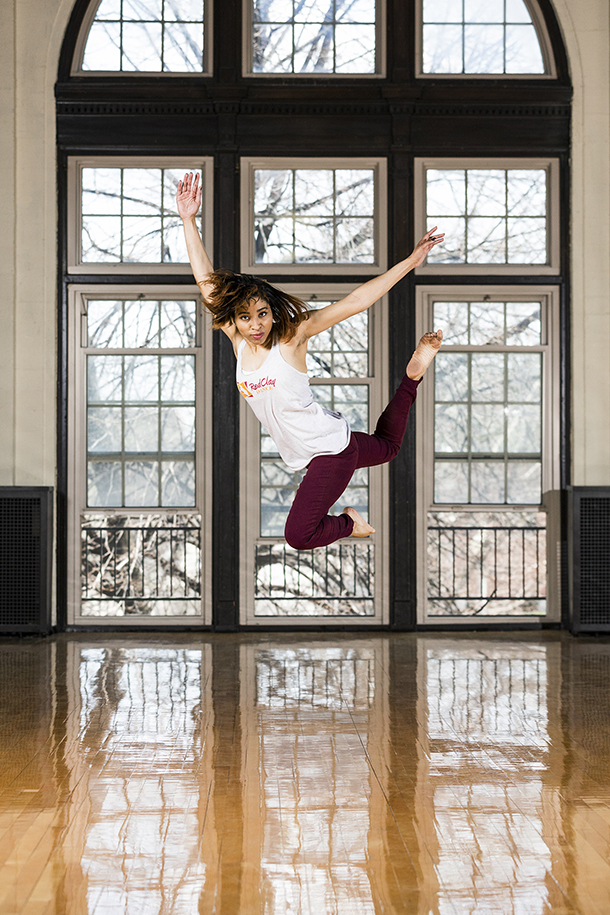 With Red Clay Dance, Sanders-Ward was able to blend the many styles she’d learned and loved through the years. She describes the work as “Afro-contemporary,” a fusion of Africanist movements and traditions that uses bodies to tell a story. That methodology inspired her company members, Marceia Scruggs ’17, Chaniece Holmes, Destine Young ’13, and Sara Zigler ’10.

“I think [Sanders-Ward’s] willingness to have open communication with her artists is a strength for the individual and the collective,” says Zigler. “To work with Vershawn is to work collaboratively, is to test your limits, your vulnerability, face your frailty if you’re willing, and find resilience, patience in strength [and] in the process. Because she aims for her work and the work of the collective to be transformative, we are always the first to be transformed.”

The Merging of Two Companies
The TransAtlantic Project came to life after Sanders-Ward met Byaruhuanga in Senegal after she completed her MFA. “It was an amazing experience in terms of opening my eyes as an American as to how I sit outside of this soil,” she says. “Being here in the States, I feel like my gender and my race are always very heightened. But being there, it was this feeling of being American first before those other things. I was grappling with that.”

Meeting Byaruhanga, a Ugandan, helped Sanders-Ward feel more comfortable; even though he lived in Africa, he was trained in East African dance, and struggled just as much with the West African style as she did. West African dance requires different kinds of rhythm; a dancer’s head and arms might move to a separate beat from their feet. The two forged a friendship that led to more collaboration efforts. Then, in 2010, they decided to merge their companies—Byaruhanga’s all male and Sanders-Ward’s all female—for one large communal performance, and spent the next seven years attaining funding to make it happen. The TransAtlantic Project was eventually made possible thanks to the MacArthur Foundation’s International Connections Fund, and has been in swing since fall 2017. 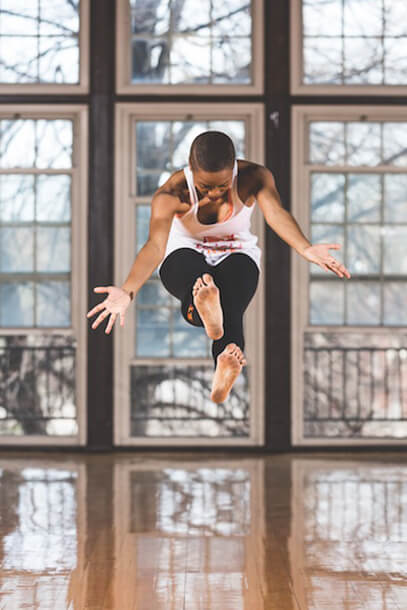 Red Clay company member, teaching artist, and activist Scruggs says she’s been profoundly changed by her experience with the TransAtlantic Project. “Being graced with the opportunity to work alongside such sensitive-to-the-ear-and-spirit yet powerfully strong men, accompanied with four other gracefully beautiful yet mightily resilient women, is a dream that I believe the audience will not want to be awakened from either,” Scruggs says. “This experience—and just being in the presence of such genuine and welcoming spirits—has definitely welcomed serenity, gratitude, and a renewed acceptance of myself.”

The Next Steps
The two companies will present the culmination of their work this November as part of the Dance Center’s 45th anniversary presenting series. Sanders-Ward was tight-lipped on what the performance will look like, but expressed that the audience will “see liberated and inhabited bodies in space with a suspension of limitation,” adding that the sets will incorporate Ugandan art—like masks and other props—sourced from the country.

“I feel like we’re removing what we assume black and brown bodies do and communicate and express,” she continues. “Hopefully you’ll see inhabited vocabulary that is just human, that is purely genuine, but also deeply rooted in culture. I hope that that’s what people will experience: this connection of culture, and reconnection of culture, that has been separated over time—and see how [those things] talk to each other and continue to influence each other.”

*This story originally appeared as "Earth Bound" in Issue 28 of DEMO, the Alumni Magazine of Columbia College Chicago.