A Philosopher and a Psychologist Discuss "The Emotional Mind" 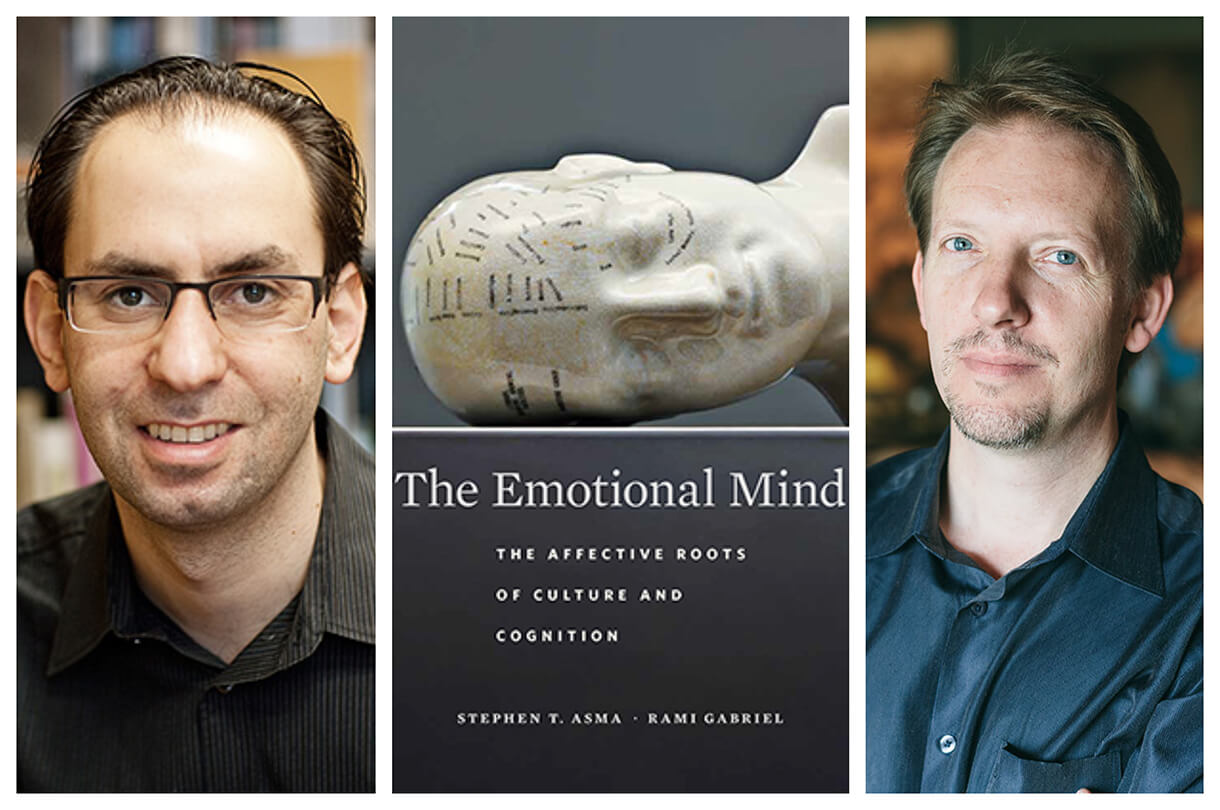 Rami Gabriel (left) and Stephen Asma (right) co-authored the book "The Emotional Mind".
Co-authors Stephen Asma and Rami Gabriel, in conversation with Colbey Reid, discuss their new book which explores how emotions are the largest part of the human mind.

Philosophy Professor Stephen Asma and Humanities, History, and Social Sciences Associate Professor of Psychology Rami Gabriel co-authored The Emotional Mind: The Affective Roots of Culture and Cognition, a book that “reveals how thought and culture owe less to our faculty for reason than to our capacity to feel.” Both are Senior Fellows at the Research Group in Mind, Science, and Culture at Columbia College Chicago.

The book comes out April 15. Below is a brief excerpt of an interview between Asma and Gabriel about their book. They are interviewed by Fashion Studies Chair Colbey Reid.

Reid: I am wondering if you could explain the paradox of your book title, The Emotional Mind?

Asma: In philosophy and psychology, there has been a tendency to think of emotions as contaminating thought, and that the brain is a machine. There’s a lot of bias like this in the Western tradition. A lot of the Greeks thought that the body and emotions were contaminations to thinking, and that if you could just get out of your body, your mind would be this frictionless machine.

[Rami Gabriel and I] think that this is the wrong view of the mind. In fact, the mind is saturated with emotions. Even thinking processes have an emotional component. In this book, we are trying to reclaim the emotions as not just as part of the mind, but, in fact, as the largest part of the mind.

Gabriel: We are also reacting against a couple of views that claim that the mind has to be computational or logical, and that the mind is largely based in language. In fact, we argue emotions are already part of that story and must be given due consideration.

Reid: For you both, it seems that emotions are a type of pathway back to the body. Can you talk about that pathway?

Asma: We’ve been very influenced by neuroscientists who talk about basic emotions that we share with other animals. Emotions like fear, anger, and lust are hardwired into being a mammal—these things are survival strategies. People can find these emotions into higher-level thinking and culture (for example, horror movies or erotica). Because of our symbolic brains, humans have the ability to take emotions into these higher levels of thinking, to then create cultural trends and genres that examine these emotions.

We think of emotions as a vertical model. The bottom would be basic emotions that we share with other mammals (i.e. fear, anger, lust) and then toward the top, you would find cultural emotions such as romanticism, classical traditions, recognized genres, or aesthetics.

Reid: There is a creepy-awesome phrase in your introduction, “the ancestral brain is alive in well in our higher neurological systems.” I wonder whether those primal, ancestral sensations are complicated in other animals?

Gabriel: There are cognitive and ecological limitations between species. Emotions have to go through the sieve of a given animal’s culture. In the book, we ask: how much culture do animals really have? And how do they shape their emotional lives.

Asma: One of the things we are doing is trying to figure out what happens when emotions change. How have humans arrived to the point where, unlike other primates, we are able to control or sublimate some emotions.

Listen to the complete interview between the three Columbia professors, here:

To hear Asma and Gabriel discuss more about the book, join them at their book launch event at Seminary Co-Op Bookstore on Thursday, April 18 at 6 p.m. They will be joined in conversation by Dr. Dario Maestripieri. The co-authors will be going on a book tour in May for The Emotional Mind: The Affective Roots of Culture and Cognition. Talks are scheduled for the University of Amsterdam Interdisciplinary Centre for Emotions, Spui25, the Hang Seng Centre for Cognitive Science at University of Sheffield, and the Psychology Department at University of York.