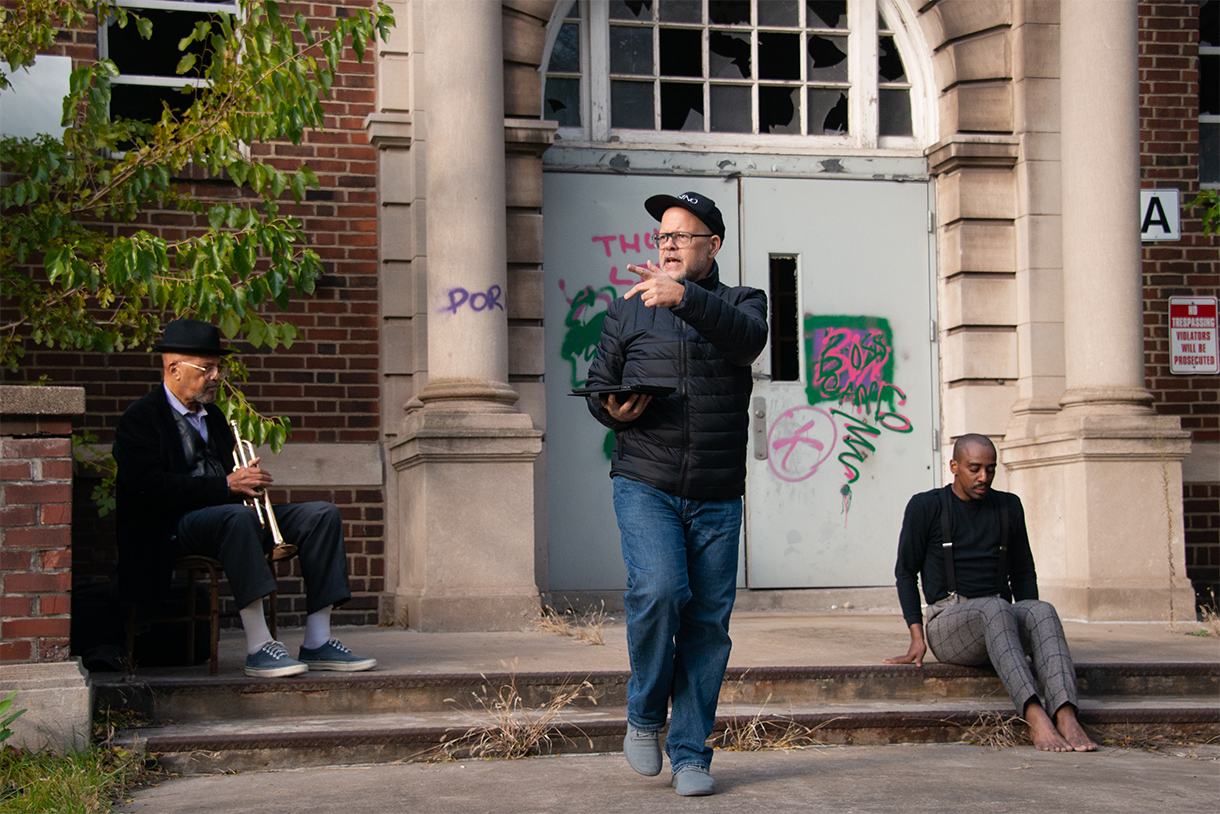 Dan Rybicky, known for his award-winning and critically acclaimed films, discusses building a balanced creative life and acting as a mentor and resource for his students at Columbia

Dan Rybicky hated the days his high-school teachers would make him watch documentaries. He loved films and television (he was even shooting his own soap opera and airing it in the school’s cafeteria at lunch) but these were something else altogether. They shouldn’t even qualify as films. They were just so boring. And they all had that same bad narrator voice. Who decided that voice should be ubiquitous? Rybicky liked stories where you really got to know people’s worlds, all of their worlds, with the humor and pathos and anxieties and realness that drew you in.

And then one film—or, rather, a few films—were released that changed Rybicky’s mind about the status of documentaries: Michael Moore’s Roger & Me, Errol Morris’ The Thin Blue Line, and the Maysles brothers’ Grey Gardens. As Rybicky remembers, “Those were films that really made me feel excited because I always felt like truth… stories about real people, were always more interesting to me than even fiction films. And those three films showed me that you could both tell stories about real people and do it with a sense of style and you could choose people and choose stories that were bold and original.”

The stories by Moore, Morris, and the Maysles brothers nestled into Rybicky’s heart and stayed there. After Rybicky got his BA from Vassar College and his MFA at NYU’s Tisch School of the Arts, he started working in film with an eye towards telling captivating stories about real people doing interesting things. The best place to start seemed to be learning from pathbreaking filmmakers. Rybicky headed straight for the top, working for the likes of Martin Scorsese and John Sayles, both of whom acted not only as business leaders but also as great mentors.

As Rybicky remembers, “[Both directors] took time to show me and to teach me what they had learned, and as I kind of thought about what do I want to do with my life I was like, "Whatever I do, I want to share what I am learning and what I have learned." Rybicky found three ways to put this goal into practice: he now consults on films, teaches young filmmakers, and continues to make his own work.

Consulting on films has allowed Rybicky to embrace creative freedom, geographic flexibility, and his own capabilities as a mentor. As he says, “Consulting involves almost being like a therapist for people's projects. And if you are a teacher, or someone who is inclined to want to help people, consulting on films or on work that people care about is such a great thing to do because people obviously need help. And they need it because it's hard for them to see the work because they're so embroiled in it. And so, as a consultant, you bring this new perspective.”

Many of the same skills that allowed Rybicky to be a sought-after consultant across the U.S. have come into play as he teaches some of the most innovative classes at Columbia as an Associate Professor in the Cinema and Television Arts Department. While today Rybicky primarily teaches documentary and producing classes, he has also taught courses on Scorsese (for which Scorsese himself donated private materials to assist in the teaching of the course), a course in which he had his students follow the draft-by-draft production of Karyn Kusama’s Sundance-winning film Girlfight, and is currently in the midst of helping to design the curricula for interdisciplinary CCCX 300-level Innovation and Impact course. Students in Rybicky’s classes experience firsthand the depth of support that is a byproduct of Rybicky’s carefully constructed community. Often, international award-winning filmmakers themselves will drop in on his classes for a chat, a screening, or even act occasionally as mentors to up-and-coming filmmakers.

In the midst of his work as a consultant and a teacher, Rybicky has produced award-winning films himself, most recently Accident, MD, a short documentary that tackles the healthcare crisis in the U.S. by examining the experiences of people in one small town in Maryland. Rybicky came up with the idea on the heels of his well-received feature Almost There, which focused on an elderly artist who suffered from significant health issues. In screenings, Rybicky noticed that people were asking lots of questions about the status of the protagonist's health. The audience wanted to know what happened after the close of the film. From those questions, idea of making a film dedicated to the issue of healthcare in this country was born. Rybicky says, “I thought… for once in my life, I want to take an idea in my head and see it through to the end. [To accomplish something where] no one tells me anything. You know what I mean?”

Inspired by Errol Morris, Rybicky found the town of Accident, in Maryland, on a map and thought, “That would be a great name.” So, he got in his car and drove there and started talking to people. It was a film that spent years in post-production, only to be even more relevant to the national conversation now than it was when he shot it. The realness of it—the people of Accident’s struggles, their fears about caring for their health and the health of their loved ones, their shame about having these worries—resonated with its audience. It premiered at the Maryland Film Festival in 2018, Richard Brody wrote a positive review of it in The New Yorker, PBS’s Independent Lens picked it up, and it won Vimeo’s “Best of the Year” Award in January 2020. As Rybicky says: “It’s been wild…As I tell my students, this really is a testament to remembering to trust your instincts in life, see something through. If you have an idea and you can make it happen, make it happen."

For Rybicky, Accident, MD is only the beginning. He has just completed two more films: Stormy and the Admirals, a short documentary that explores feminism through the lens of female activists attending a Stormy Daniels show at the gentleman's club known as the Admiral Theatre in Chicago, and Larry from Gary, a longer short documentary featuring an arts teacher and mentor from Gary, Indiana who has had students excel on national stages.

Both films are already enjoying significant success. Stormy and the Admirals will be available to watch here through election night, and is currently being considered by major outlets for distribution. Larry from Gary will premiere this month at the Academy Award-qualifying St. Louis International Film Festival in Doc Shorts: The Black Experience and as a part of their Cinema for Students program, as well as the Gary International Black Film Festival, also this month.

Being a part of a supportive community has been crucial for Rybicky’s success. He continues to write, to practice, and to work with others in his field. After all, there are more stories to tell, more people to work with, and more students to mentor. He already has exciting plans for globalizing his Fall courses and bringing filmmakers working around the world into his classes through remote platforms. His goal is to encourage community building, collaboration, and innovation. As he tells his students, “Look for those in your community that you feel a kinship with because film is a collaborative art and you're so lucky to be in this place to find your fellow travelers.”