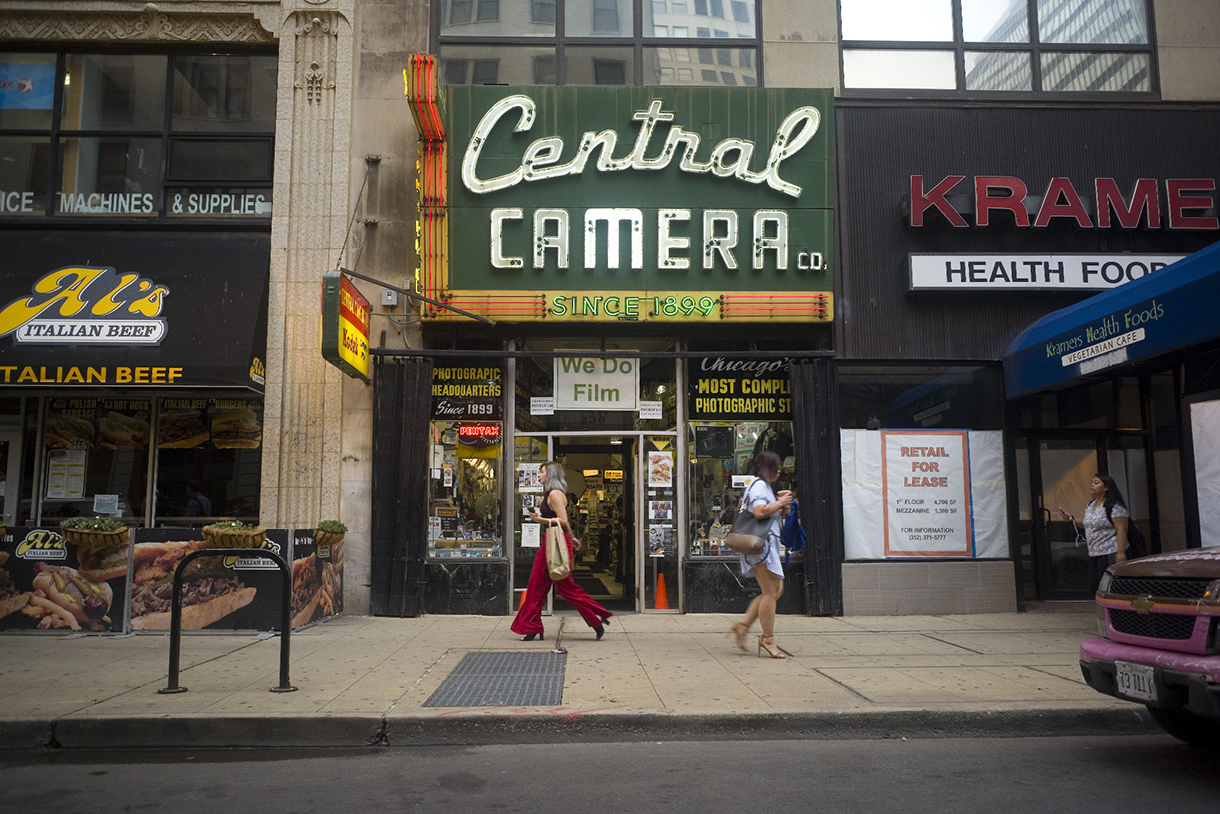 “It’s what’s going on, it’s reality so you deal with it,” said Don Flesch, third-generation owner of the iconic Central Camera, as he watched his store burn down during the George Floyd riots in Chicago. In the same interview with CBS Chicago, Flesch said that he wasn’t mad at the looters, but at the situation that caused the riots, and that he would rebuild Central Camera. All as he was watching firemen put out the fire at his store, which has been in the family for 121 years.

“Central Camera is a landmark that I've walked past and into countless times. It’s a place that has a deep connection to anyone in photography or film in Chicago,” says Columbia College’s Associate Professor Jeffrey Spitz who teaches Big Chicago: Chicago Film History.

A part of Big Chicago, a variety of first semester courses for incoming freshmen, Chicago Film History is a screening, lecture, and experiential course for incoming students to learn more about Chicago and gain deeper ways of thinking about the urban context and communities that surround Columbia College Chicago.  The course engages students in issues of diversity, equity and inclusion, and explores the city as a real laboratory of learning. Chicago Film History explores Chicago’s formative role in the creation of the film industry and analyzes how Chicago has been represented in American narrative and documentary features.

Big Chicago courses allow students to meet their peers and begin to build relationships, an important first step in creative communities. This semester, Spitz’s students are also forging a creative connection to Central Camera. In the course, students have learned about the very early days of film, the companies and the characters in early films made in Chicago. Spitz’s students have been tasked with bringing one of those characters back to life to help Central Camera recover and reopen. Students have done this by creating public service announcements, like the two you can see below:

The above video is a trailer for Chicago Film History student’s PSA’s for Central Camera.

The above video utilizes the image of Kathlyn Williams, a major star in 1913 of the first cliffhanger series made by the Selig Polyscope Company of Chicago. Williams, a silent film actress from early Chicago film history, is shown rallying support for Central Camera.

Spitz works to connect Chicago’s film history with the present. He incorporates music, video makers, brand new filmmakers, as well as documentary and short web series into his class, not just feature films or scripted films. “If it's happening in the Chicago film community right now, it has roots in the past,” Spitz shared. Due to COVID-19, this semester many of Spitz’s students are participating remotely. To help design the class for an online format, Spitz created a video lecture series about William Selig, the builder of the first studio in Chicago and the first one in Los Angeles. Selig manufactured cameras, projectors called polyscopes, and approximately 3,500 short films. He was one of the first moving picture pioneers to work for clients. He formed partnerships with the Chicago Tribune and Hearst newspapers to create the earliest newsreels and he partnered with Frank L. Baum to make the first film version of The Wizard of Oz. He started the jungle adventure genre with a female lead, Kathlyn Williams, and produced 26 cliffhanger episodes. While Spitz was doing research for his lecture series, he found that Selig’s offices once stood where Columbia’s Student Center is now located, at Wabash and 8th Street.

A student's voice over allows William Selig to speak out for Central Camera which started three years after Selig launched his company in 1896.

Spitz’s favorite part of teaching Chicago Film History is seeing the students’ reactions to the significant film institutions and influences that come from the city. He enjoys teaching his students’ ways to persuade others to go into the city and visit such sites as the Music Box Theater, Second City or Kartemquin Films. On advice for students who would consider taking his class, Spitz shared, “what I think they should know is that Chicago is open to you. When you come here, your voice matters and your ideas matter. What makes your heart beat, your pulse race, is what will connect you to a creative community here. You'll find people here who want to help you to make art and make a difference.”

On advice for current students, Spitz says, “stay positive and be flexible. If you're interested in a Chicago topic talk to me, shoot me an email. Let's talk. I think that there's a high percentage of Columbia students who want to use media to make a difference in the world, and they're not just in film, they're in every single department. I like to meet students and help them find their footing in the real world.” Spitz is also looking forward to sharing his class’s Central Camera public service announcements with Flesch. Spitz hopes the videos increase awareness of Central Camera and Chicago Film History. To visit Central Camera’s GoFundMe page, see here.