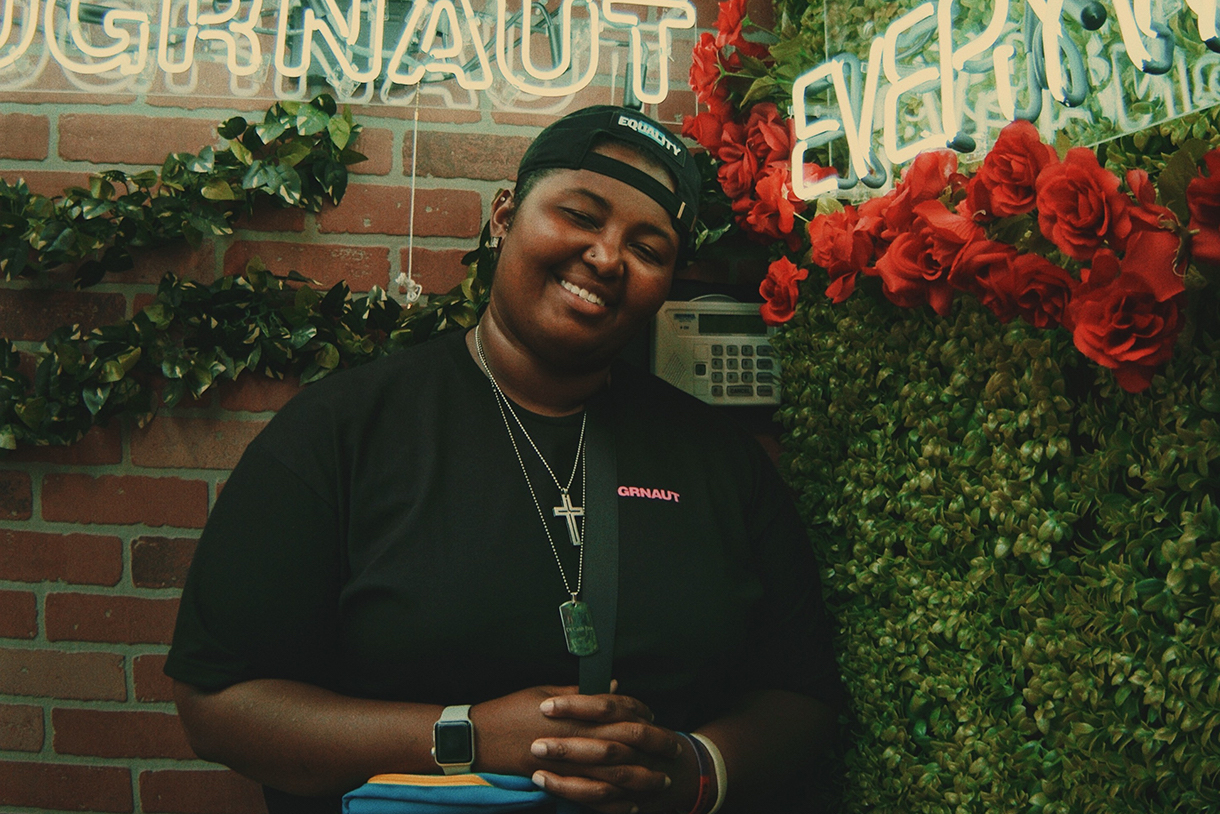 CaSera Heining, ’17, known professionally as DJ Ca$h Era, is the magic combination of incredibly talented and incredibly humble. She’s so humble, actually, that she didn’t even notice at first that she was becoming famous. She says, “It hit when people started noticing me walking down the street—a lot of people know me who I don’t know. That was the point where I was like ‘okay, this is real.’”

It was a far cry from the future that freshman CaSera imagined on the day she met with her Columbia counselor to choose her classes. An honors student, CaSera was more concerned with meeting her core requirements than anything else. In fact, it was her counselor who suggested that she fill the last three credits of her schedule with Club DJ 1, taught by DJ INC (short for ‘I Need Cash’). CaSera was a little ambivalent—wasn’t there another math class she could get out of the way or something?—but ultimately agreed. Her uncertainty evaporated from almost the first moment. She recalls, “I fell in love with it from the very first day. [DJ INC] had us mixing on vinyl. He’d tell us, ‘The more you practice, the better you get at it.’ I’d practice every week, sometimes every day.”

Her talent stood out from the start. Soon, DJ INC was CaSera’s friend and mentor, connecting her with festivals like Young Chicago Authors’ Louder Than A Bomb, the largest youth poetry festival in the world. CaSera remembers that gig, her first festival gig, especially fondly. She says, “I shadowed one of their DJs, DJ Itch-13…and then they just threw me into the flames.” She goes on to say, “My job was to keep the energy up the entire time. I’d play music when they were walking up and following up after the poem.”

And while other DJs played music indiscriminately—even randomly—DJ Ca$h Era took time to get the feel of a piece and to play songs that truly complimented a performer and their work. The management at Young Chicago Authors (YCA), took note. CaSera remembers them saying “Yo, who’s this new DJ? Where’d she come from? She’s really, really, good!”

Throughout her time at Columbia, CaSera built up a strong social media following, continued to work with Louder Than A Bomb, and played house parties, graduations, birthday parties, and any clubs that would have an under-21 DJ. She was becoming known for integrating throwbacks into her sets and being unafraid of the wildcard song. All the while, CaSera continued to study radio, becoming an adept producer, editor, and content creator. She was busy; time passed quickly.

Things changed by her senior year. CaSera started to get a little worried about making ends meet after graduation. She started applying religiously to jobs in radio across Chicago—and even outside her beloved city to places as far-flung as Philadelphia and Atlanta. One month passed—nothing. Then two, three, four, and five months passed. Crickets. CaSera remembered her inflexible and low-paying job at a car wash she had one summer during college. It was shudder-inducing. There had to be a better way to pay the bills. She kept applying.

CaSera says, “Coming up on graduation, I started getting really nervous. I was thinking, ‘Oh, man, I have a major in radio and a minor in television, and none of these jobs are biting back, what am I gonna do?” It had been nearly six months without any offers. She had to eat, but she really, really didn’t want to leave Chicago: family and friends were here, DJing was here.

Graduation came and went, and still no job. She decided to meet with Kevin Coval of Young Chicago Authors, a mentor of hers. She remembers, “When I met with Kevin it was maybe two weeks after I walked the stage and he was able to calm me down. And he looked right at me [as I talked about leaving the city] and said, ‘Absolutely not. We are not letting you leave Chicago, you have to stay here.’” She laughs. “He was not even letting the words come out of my mouth that I was gonna leave the city!”

Kevin leaped into action. CaSera remembers, “We started calling people, and WGN showed interest. When I found out the job was part time, I was like, ‘Beautiful! I can balance both! It isn’t going to interfere with anything! And it hasn’t.”

As CaSera worked her way up to Producer at WGN, DJing took off as well. Aside from club bookings and private events, she’s won such contests as the Chop Shop Competition, performed at North Coast Music Festival, the Apple Store on Michigan Avenue, and the Ace Hotel. Many of her gigs have come through social media and the positive relationships that she’s built across the industry.

And she’s just getting started. As she says, “Every year I’m battling myself to be better. Now it’s at a point where I’m booked 5-8 gigs in a week with residencies at SoHo House, I’m Louder Than A Bomb’s official DJ, I took myself to London two years ago, New York, last year, L.A. this year…I’m setting bigger goals.” Still, with all the excitement, DJ Ca$h Era stays true to herself. She says, “I don’t stress it. I let whatever may happen, happen. I’ve been told I’m the people’s champ for DJing.” The people want more. And for DJ Ca$h Era, the time is now.