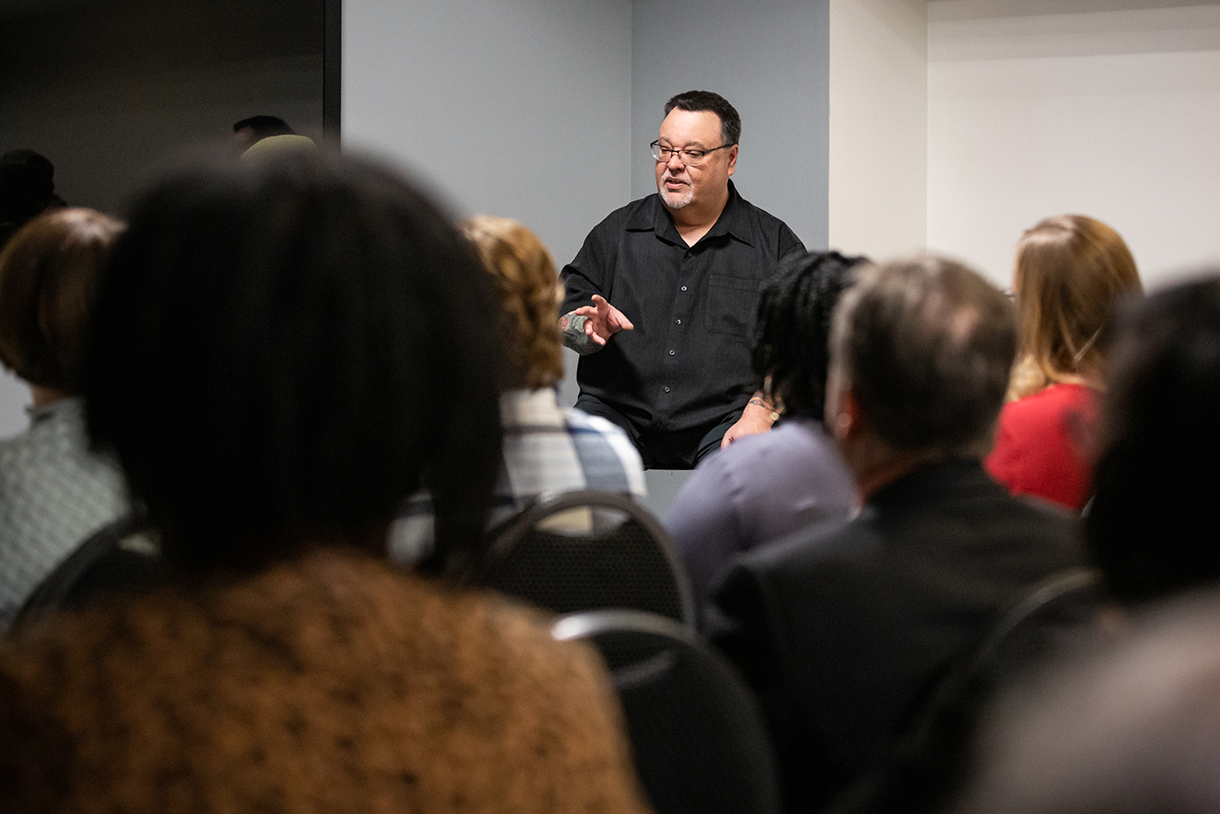 When asked about advice for future journalists and artists, Jim DeRogatis said, “I give them the advice I’d give any young aspiring artist who may meet a Harvey Weinstein – don’t you ever take any f***ing s***.”

That kind of raw advice doesn’t sound like a lesson you would pick up in a classroom, but associate professor Jim DeRogatis doesn’t pull any punches when speaking to his students -- especially not after the 19 years he’s spent on the streets of Chicago, documenting the life and times of R. Kelly.

Jim DeRogatis teaches courses in cultural criticism at Columbia College Chicago, but lately he’s spent a lot of time talking about a story that has defined his career. Just recently, he participated in a panel discussion along with journalist Mary Mitchell ‘91 at the Museum of Broadcast Communications to discuss his book, Soulless: The Case Against R. Kelly, and his participation in Lifetime’s “Surviving R. Kelly: The Reckoning.”

DeRogatis’ reporting on R. Kelly started in 2000 with a Chicago Sun-Times article, where he made the case that the R&B superstar abused his position of wealth and fame to pursue illegal sexual contact with underage girls. In 2017, he published another explosive story in Buzzfeed detailing how R. Kelly kept women against their will in an abusive “cult.” Following the Buzzfeed story, R. Kelly released a song titled, “I Admit,” where he called out Jim DeRogatis by name and mentioned DeRogatis’ years of reporting. More recently, DeRogatis published a book, Soulless: The Case Against R. Kelly. After years of reporting on the story, DeRogatis felt a book was needed to help understand how R. Kelly was able to prey on 48 women whose names he knows for 30 years in full view of the world. “The answer could only be told in a book,” he said, “how everybody failed these young women. It’s important to understand so it can’t happen again.” DeRogatis has been able to help shift a cultural narrative through his reporting on R. Kelly.

The book, articles, and all of the reporting in-between has helped lay the groundwork for the successful documentary and the 42 felony counts that R. Kelly is currently facing. DeRogatis mentions that the documentary is undeniably powerful, but “Surviving R. Kelly” wouldn’t have been able to happen without the 19 years of journalism which told the story. He believes “sometimes you choose your story and sometimes it chooses you.” This was a story that chose DeRogatis but he’s persisted in seeing it to the end.

This January DeRogatis appears in the docuseries, “Surviving R. Kelly - Part II: The Reckoning.” In the documentary, he is positioned as an expert who is able to provide background and context on both R. Kelly’s life and the survivor’s stories as he’s been the only journalist to follow this story continuously since 2000. He decided to be interviewed for the second part of the series after Lifetime’s documentary “Surviving R. Kelly – Part 1” repeatedly referenced his reporting and research.

DeRogatis believes “Surviving R. Kelly” has been so impactful because viewers “had the experience that I have been having for years of sitting in a room with a woman as she does the most difficult and bravest thing a woman can do and that’s baring her soul about a sexual assault by a powerful, wealthy, beloved man.”

Both print and television are important mediums to share messages, but according to DeRogatis, knowing how to write comes first. “My job as a reporter is to listen and amplify people who are not being listened to, relating what they’re saying.” DeRogatis uses his life experiences as a writer, critic and journalist to teach students how to express themselves and their passions clearly, colorfully and concisely.

“One of the strengths at Columbia is that we have so many faculty that have done or are doing what they are teaching and that’s exciting. Teaching has certainly made me a better critic and a better thinker. I use the skills as a reporter to get students out of their shells – find out who they are and what their passions are.”

Emily Ornberg ‘14, is a former student of DeRogatis’ and continues to follow his reporting on R. Kelly. The first class Ornberg took with DeRogatis changed her life. She witnessed his love of writing, bravery while sticking up for other people and witnessed how DeRogatis helped shift public perception and purpose. The biggest lesson DeRogatis taught Ornberg is that you can’t remove the message from the creator and history. Every message needs to have context.