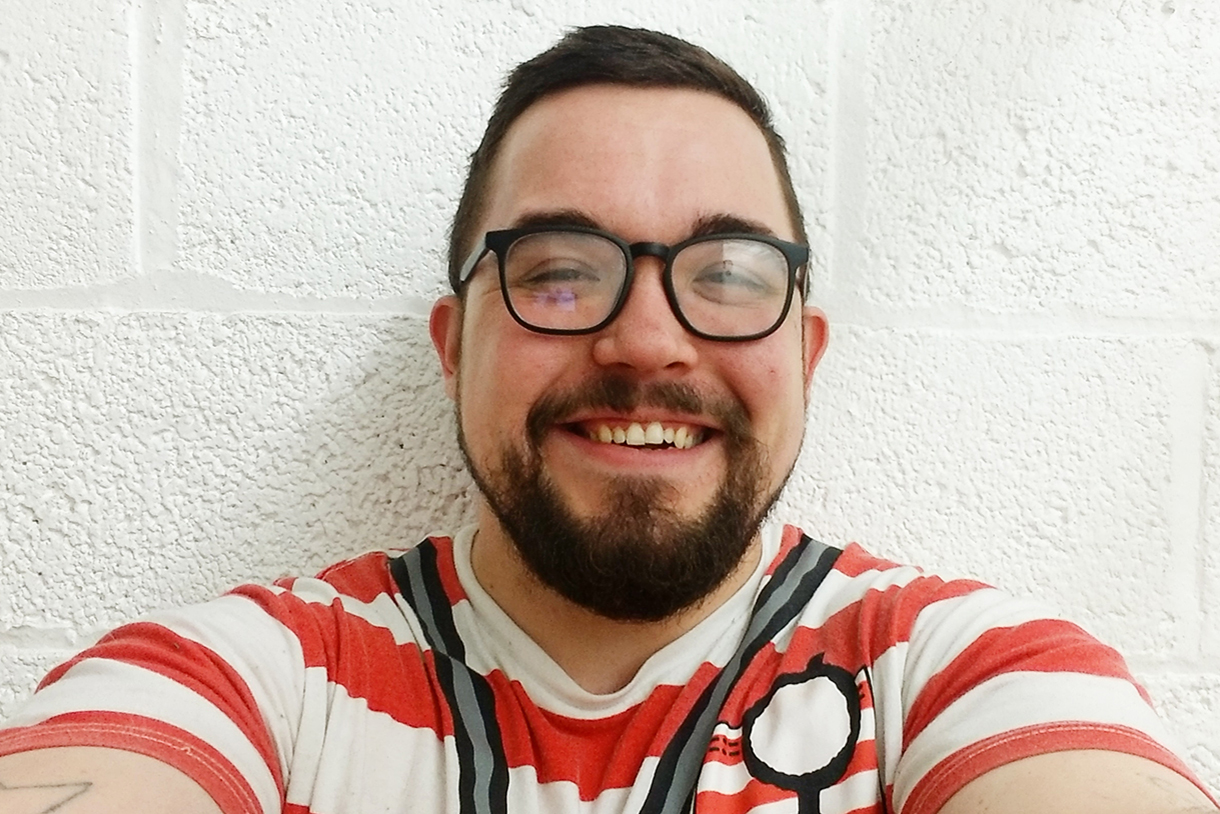 Atmosphere Press will publish the novel within the next yearIt’s May 19, 2014, and Nick Olson BA ’14 just graduated and attended Columbia College Chicago’s commencement. The day after graduation, Olson put pen to paper and began writing Here’s Waldo.

Olson was born and raised in Des Plaines, IL, and that's where the majority of his novel Here's Waldo takes place. It's a tragicomic coming-of-age story that follows writer Waldo Collins from age eight to age twenty-four as he navigates adolescence, trauma, and creative pursuits against the backdrop of his lower-middle-class neighborhood, spanning from the '90s to the 2010s.

Since Olson began the story, he’s been writing, rewriting, preparing to send out, or sending out this book. Now that the story is completed, Atmosphere Press will publish the novel within the next year. Olson notes that Columbia helped him to take his passion and “focus it, stick with it, and turn in pages even when he had no one to turn the pages into but himself.”

Here Olson talks a bit about Here’s Waldo and how Columbia helped him become a writer:

I tell people that even though this is fictional, Waldo is essentially "me." I've gone through many of the things that he did. I was that kid growing up in the torn-up part of town. I was that young man coping with trauma and trying to turn it into art. Even the parts that aren't factually true to my life are still emotionally true to it. I wrote this book for the kids who didn't fit in no matter where they went. The kids who didn't know where their next meal was coming from. The kids whose neighborhoods were infected with violence. I wrote this for the broken, so that they could feel strong enough to put themselves back together.

Columbia helped me tremendously, not just with this book, but in my entire life. The workshops, rewrites, critiques... all of it is baked into my DNA at this point. I didn't start this book until after I graduated, but the seeds of it were there in the stories and scripts I turned in while I was a student. I owe so much of who I am as a writer to professors like Sue Mroz, John Rangel, Dale Chapman, and Cari Callis. They all taught me how to focus that flame, how to sustain it, and I thank them so much for that.

I was already writing quite a bit before I started at Columbia, but it was all learning by doing. Trial and error. Columbia gave me an environment to keep experimenting, yes, but it also improved my technique tremendously. The writing courses I took helped me to understand the structural things I knew at an intuitive level but couldn't always explain and/or replicate. That, and it gave me a community, a true family of creatives who were all trying to develop their voice. Columbia taught me that the pages you write are better than the pages you don't, even if you end up having to rewrite those pages a couple dozen times. (And I have!)

What was your major at Columbia?

Funny enough, I didn't major in Creative Writing. I studied it while at Columbia, but my major was Cinema Art and Science, with a concentration in screenwriting. The language of film definitely informs my writing, though, even now. I was always a screenwriter who wrote more like a fiction writer and a fiction writer who wrote more like a screenwriter, so I learned to embrace the weirdness of my style and just roll with it.

I would absolutely advise a prospective student in my field to attend Columbia College, and that goes for film students, screenwriters, and fiction writers. It's been six years since I graduated, but everything I learned there is still valid and vital today. I regularly hear Rangel's voice in my ear when I'm working on a rewrite. I See Dale Chapman when I'm analyzing structure on subsequent drafts. I still use character development tools that Sue Mroz taught me back in Screenwriting I in 2011. I'll always treasure my time spent at Columbia.

Go to events. Talk with students of other majors. Collab with them if you can. Put everything you have into your work, yes, but try to ditch your fear of failure to the extent possible. If you're not regularly failing along the way, you're not doing it right.

Is there anything else you’d like for us to include?

We're still early in production now, designing the cover, deciding on fonts, all that fun stuff. But it's looking like six months to a year is a safe bet right now. I'll be posting updates on my site, nickolsonbooks.com!

When I'm not writing, I also run an online literary magazine called (mac)ro(mic). For anyone who loves to read flash fiction or creative nonfiction, that's over at macromic.org.