Something is Strange in Crestfall, Idaho 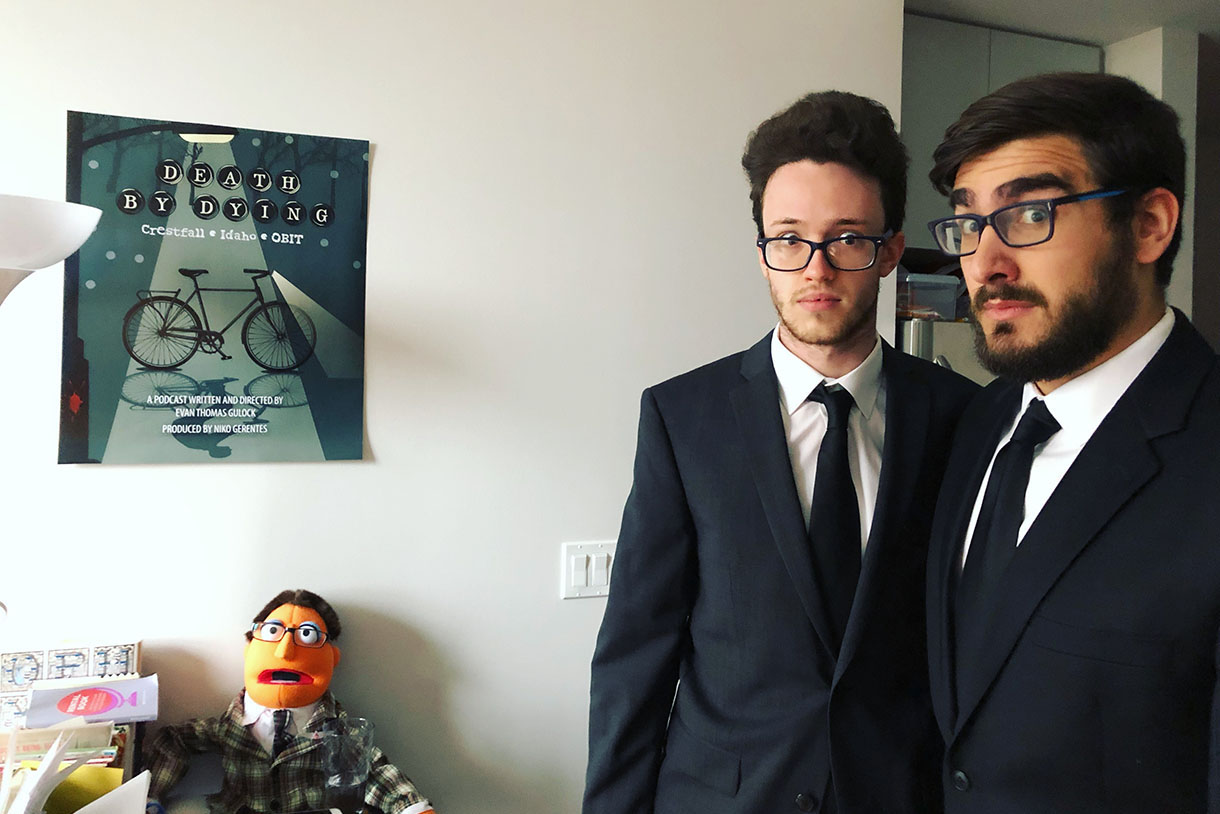 Niko Gerentes (R) and Evan Gulock (L)
Crestfall is a remote town, in a remote place, inhabited by a curious cast of characters. They are interesting, lovable, and unique. And they keep dying of not-so-natural causes...

The charming town of Crestfall, Idaho, is home to ramshackle homes, farms, animals, pastry shops, mysteries, and, of course, a most lovely obituary writer. The obituary writer from Crestfall, Idaho, would like to remind you of the life of Wyatt Hutson, 47, who “died late Sunday evening as the stars began to fill the black of this that is the sky.” Wyatt may only be a blue-stem grass farmer, but his life, the writer notes, was duly deserving of being celebrated. After all, he writes, “Wyatt was basically everyone’s favorite person on the planet.” But, here in the lovely little town with “modestly handsome” spokespeople, it turns out that something is a little—off. Perhaps not everything is as it seems, perhaps not everyone is passing away peacefully, and of natural causes.

Of course, Crestfall, Idaho, doesn’t exist except in the six-time Audio Verse Award-winning podcast, “Death by Dying,” created by writer Evan Gulock and producer Niko Gerentes, both Columbia College Chicago alumni. Though Evan now lives in Michigan and Niko has moved to Los Angeles, the incredibly popular podcast was born here in Chicago in a Columbia course titled Radio Podcasting, taught by Associate Professor Matthew Cunningham. And in that class, Evan sometimes felt like the odd one out.

It turns out that Cunningham, however, was the right audience. Cunningham reached out to Audio Drama Club President Niko Gerentes to show him Evan’s work to which Niko’s reaction was: “I have no idea what this is, but I love it.”

“Death by Dying” originated from a much simpler idea. At first, Evan thought, “What if there was a podcast where each episode was an obituary about a fictional person who had died?...Telling inspiring poignant little slices of life?” But Evan’s brain is not one that sits still easily, and he has what he calls “an absurdist streak.” Soon, he was wondering: “What if there was this guy named Pastor Jeff, and maybe his friend is the Angel of Death?” The ideas kept coming, one after another, until soon there was an entire fictional town populated by fictional characters. Now, Evan says, “it was like the town was waiting for me.”

For Niko, who is a voice actor as well as a producer, the opportunity to build this town through this podcast was perfect. He had spent previous years under the mentorship of audio drama writer and Associate Professor George Zarr. Zarr was supportive of Niko’s desire to build an audio drama club, providing simple solutions to potential roadblocks (Niko remembers, “I’d be like, ‘we lost a writer!’ and he’d say, ‘well, get a different writer!’”). Their relationship taught Niko to never give up, that there was always a way to overcome challenges.

Evan, likewise, had benefitted from the support and tutelage of an expert in his field—in his case Danny Kravitz, a screenwriter known for “The Minuteman” starring Liam Neeson and an adjunct professor in Cinema and Television Arts. Evan recalls that unlike other jaded influences, Danny was “still very much like, ‘You have this idea, try it out, if that doesn’t work, okay, try something new.’ He was encouraging and inspiring as I was trying to figure things out.”

By the time Evan and Niko met, they were both dedicated to their crafts and excited for a new long-term project. And for them, podcasting was perfect. As Evan says, “Podcasting is a really cool medium because you can personalize it [and] you can tailor it to your life at every moment. It always takes new forms as life throws stuff at us.”

“Death by Dying” has grown along with its creators: it now hosts actors from multiple cities who record remotely, features crossover episodes with other podcasts, and is in development for season 2. Niko, now working at a recording studio in Los Angeles, often makes connections for the podcast at work. He laughs, saying “‘Audio drama’ are my trigger words. Every time I hear someone at work say them, I run up to them and am like—‘Wanna be in one?’”

Between the creators’ enthusiasm and the high production values of the show, the industry is taking notice. The series cleaned up at the 2019 Audio Verse awards, which Evan describes as the “Oscars for fiction podcasts.” It was nominated in the categories of Best New Audio Play Production, Best Performance of a Leading Role, Writing, Vocal Direction, Environmental Sound Design, and Best Performance of a Supporting Role. It won in every category in which it was nominated.

So, what’s next? More. More seasons, specials, and tales from a charming little town with modestly handsome spokespeople and a lovely, lovely, obituary writer. All is well. Or—is it?

Check out “Death by Dying” on Apple Podcasts, Spotify, RadioPublic or wherever you find your podcasts.