Zen and the Art of Audio Preservation 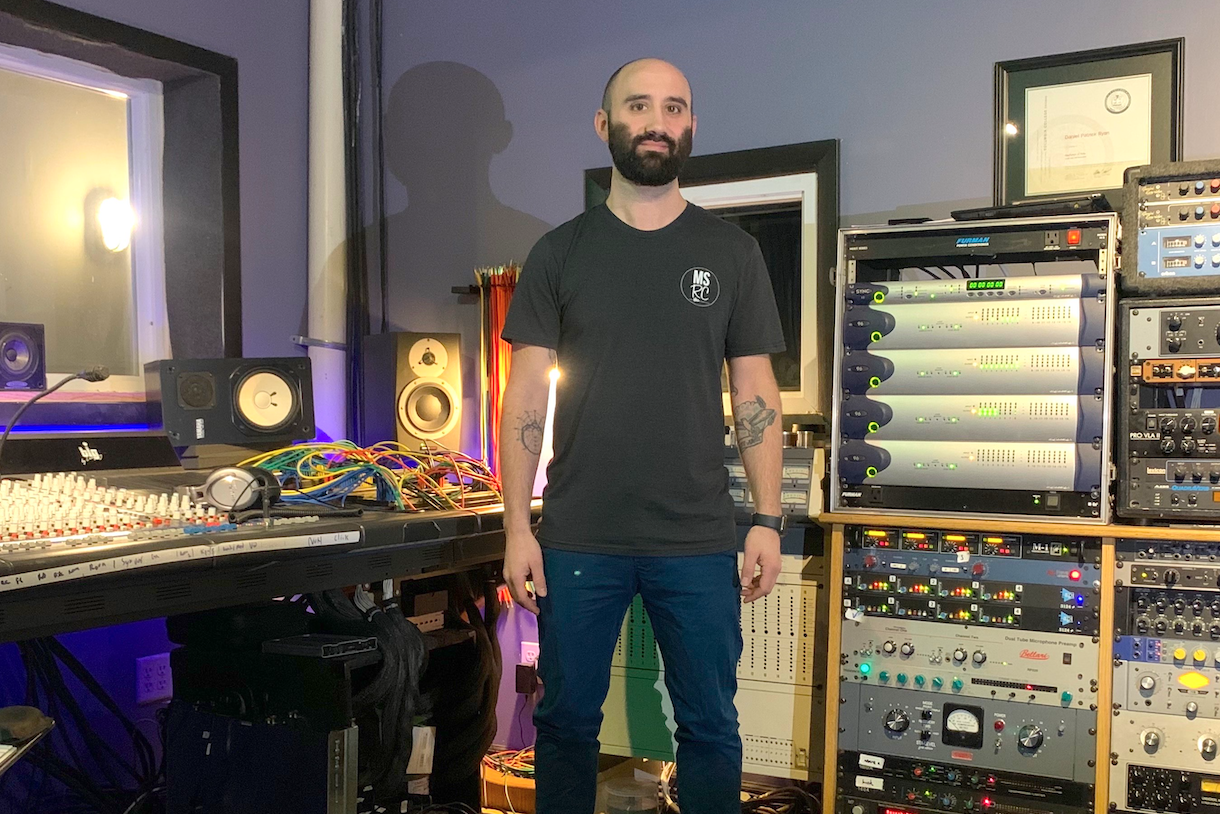 Joseph Tessone in his studio
Columbia College Chicago adjunct faculty member and alum Joseph Tessone is an expert in all things audio. Here, he discusses his work as President and Lead Engineer at Mystery Street Recording Company.

Joe Tessone, aged 8, was frantically trying to remember the lyrics to “Gin and Juice.” His sister was holding him hostage in her bedroom and wouldn’t let him out until he got it right. Was it:

Tessone, an Adjunct instructor and Audio Arts and Acoustics alumnus, remembers those days fondly now, with humorous serenity: “She’s about eight years older than me…that’s what older siblings do to you!” At the same time that Tessone’s sister was inflicting some good-natured torture, his brother was bringing him to shows and helping to inculcate a deep love of all things music and all things audio in his younger brother.

A couple of years later, Tessone and his friends started a band, and Tessone bought his first PA system. He was one of the only people around who had one. Soon, he was renting it out for $25/show to other bands and putting his earnings back into audio equipment.

By his sophomore year of high school, Tessone, a straight-A student, was bored with public school. He was already making music, working full time, and developing a keen interest in audio arts. His mother was supportive of his interests and let him complete high school via a correspondence course. Tessone was so motivated that he finished two years’ worth of high school in eight months.

After getting some gen-eds out of the way at Joliet Junior College, Tessone enrolled in Columbia, a move that prepared him for a versatile future in a competitive industry. He says, “All of the professors there became colleagues and people I work with now on a day-to-day basis.” Two opportunities from Columbia in particular have helped him in his work as President and Lead Engineer at Mystery Street Recording Company.

The first was meeting another Columbia student and soon-to-be business partner. Tessone recalls, “We had a lot of classes together so we would always partner up to do these class recording projects.” Soon, they were sharing equipment and collaborating on projects outside of school, too. That partnership resulted in a robust client list. Pretty soon they realized they were going to need a space for their projects.

In a surprise twist of fate, while Tessone was working on an audio preservation internship at the Old Town School of Folk Music, the café manager at Old Town informed him that he owned a building with a recording studio in it and was looking to rent it out. It was twice what Tessone planned to spend on rent, but it had already been built out by a former Columbia College Acoustics Professor, Andy Sickle, and it just felt right.  Mystery Street Recording Company opened on June 27, 2007.

For almost a year, the business steadily grew through engineering audiobooks, recording bands, operating rehearsal spaces, and making use of the connections and skills developed at Columbia. Things were going well.

Tessone’s voice is surprisingly calm when he describes what happened next. On May 4, 2008, Tessone and some friends were picking up a piano in Chicago’s northern suburbs. They were finding it difficult to get through traffic on the way home. From their rented U-Haul, Tessone called a buddy who was going to help him unload. His friend said, “For some reason, the fire department is blocking off your street. Not sure why, but that’s why there’s bad traffic.”

It was the studio. A cord from a lamp was caught underneath a leg of a couch, which caused a short, which caused heat, which caused a fire. By the time Tessone was able to jump out of the U-Haul and run to the scene, everything was engulfed in smoke.

He remembers a fireman coming up to him and saying “Okay. What’s the most important thing in the first room?” Tessone identified some hard drives. The fireman went in and saved them. Everything else was melted.

Tessone remains calm throughout the re-telling. He’s the zen-and-the-art-of-surviving-a-fire-that-takes-everything-you’ve-spent-your-life-working-for expert.

Thankfully, Mystery Street had insurance. Tessone filed claims. It was going to take time. Another Columbia connection was there to help make sure they could maintain relationships with their clients and still deliver on projects. Dan Dietrich, an Adjunct in Audio Arts and Acoustics, let Mystery Street use his studio for free for three months while they re-built. He even wired their repaired and refurbished control room.

While engineering audio and performing has always been a part of Tessone’s life, he is also an expert in audio preservation, thanks to his Spring 2007 six-month internship at the Old Town School of Folk Music. At the end of that internship, he had developed a series of protocols (and an accompanying manual) for preserving old audio recordings. His boss, originally planning on hiring a series of interns for this work, instead said, “There’s no way I can teach this to anybody, it’s way too complicated. So…do you want a job?”

Tessone took the offer. At the same time that he was building up Mystery Street he was on staff for four or five years at Old Town School. The relationship persists to this day. Now, though, it’s his own audio preservation lab, vetted by none other than the Library of Congress, in which he’s making his edits.

Tessone is actually a bit of a specialist-turned-da Vinci when it comes to rolling with the punches. One of the perils of audio preservation is that when old playback equipment breaks nobody knows how to repair it. Tessone and his team have taught themselves how to make many of these crucial repairs and have even 3-D printed replacement parts that no longer exist in the marketplace.

Aside from continuing to push the boundaries of his field, Tessone is a dedicated animal and environmental rights activist and finds ways to live his values. In just one example, Mystery Street recently (very recently—January 29, 2019) installed 30 solar panels to power their work.

When he’s not updating his studio, recording sessions, or preserving audio, Tessone can be found these days teaching a course titled Audio Deliverables, Preservation, and Mastering in Columbia’s Audio Arts and Acoustics department. Being a mentor to others in his field is important to him, and even as he teaches, he remains a student, too. He knows it’s necessary in order to continue to grow.

He says, “People who are doing really well are the ones studying, discovering new things every day, and never feeling like they’ve got it. You have to keep an open mind, because you’re constantly learning in this field.” So are his students, from none other than the master himself.