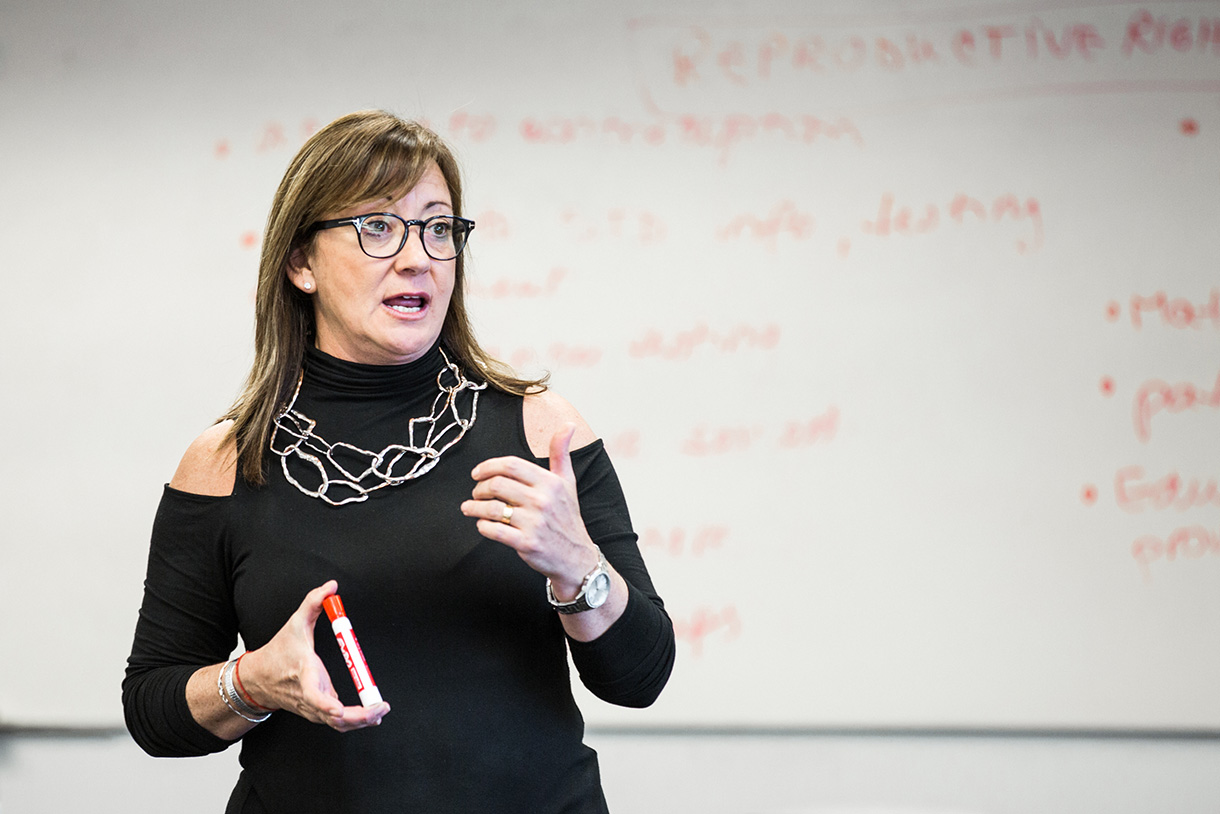 When Humanities, History, and Social Sciences Assistant Professor Gabriela Díaz de Sabatés was a teenager she never considered that life could take her places and paths that she had never imagined. When Díaz de Sabatés was in high school in Buenos Aires, Argentina, she had gotten a new English teacher and for the first time was learning American English, instead of British English. Díaz de Sabatés struggled with the material and told her teacher that she planned to do the bare minimum to just pass the class because “When am I going to need this language?”

Today, Díaz de Sabatés has lived in the United States for almost 31 years. She first came to the United States to get her Ph.D. At the time, Díaz de Sabatés was a clinical psychologist in Argentina and conducted research for the University of Buenos Aires and UNICEF on homeless young mothers and their understanding of family ties and relationships. Díaz de Sabatés realized then that the psychoanalytical theory that she learned at the University of Buenos Aires wasn’t the right fit for this type of research, and that she needed to further her education in the social sciences.

To achieve this goal, Díaz de Sabatés applied to and attended Harvard University. She realized during her first semester that she was different from most of the other students on campus and began questioning her place in such a privileged environment. It was then that Díaz de Sabatés enrolled in a class called “Women's Life Stories”: It was a course about the power that the retelling of life stories has in modeling and re-creating people’s identities. “That class changed my life completely. It allowed me to see what I was struggling with: It was not academics, it was my own identity by being in a new country. Taking that class gave me a lot of strength, and it provided me with different ways in which I could look at myself and reinvent myself, and rethink about my own identity and the identity of others,” said Díaz de Sabatés. One example of her struggles is that Díaz de Sabatés had never been referred to as a Latina woman before coming to the United States. The term “Latinx” is only used in the United States to refer to a large, complex and diverse group of people from over 20 countries. But people who live in Latin American countries refer to each other according to their nationalities. Her journey in the United States turned to be for her sort of a quest to find out what it means to be a Latina in this country and what aspects of that identity she would take and which ones she’d reject. Díaz de Sabatés graduated from Harvard with a master’s degree, and received her Ph.D. from Kansas State University, where she also first began teaching. She joined Columbia College Chicago in 2017 where she created two classes: Women’s Life Stories investigates the ways in which people’s lives are impacted by sexism, classism, racism, gender identity, cultural differences, and national origins in both historical and contemporary times. “Life stories are essential because they tell us about the vastly different ways in which people live their lives,” shared Díaz de Sabatés. The second class she created is “People, Power, and Narrative: Unsung Heroines”, a course that focuses on finding out and telling stories about usually unnoticed but powerful day to day heroines around us. Díaz de Sabatés also teaches Women, Gender and Sexuality Studies, Women's Life Stories, Women and U.S. Society, and Introduction to Latino and Latin American Studies courses in the Humanities, History, and Social Sciences department. She is also the coordinator for the minor in Latino Latin American Studies, and as such Díaz de Sabatés created the lecture series on Latino and Latin American Studies, which brings awareness about Latin America to the Columbia community and the general public.

Díaz de Sabatés enjoys teaching most in a classroom, however due to the COVID-19 pandemic she, like many others, had to adapt her course material to online learning. However, Díaz de Sabatés went a step further and acknowledged that many of her students would be dealing with feelings of being stranded, unhappy, lonely and sad. To help her students work through these negative emotions, Díaz de Sabatés incorporated relevant videos and lectures into her courses and made a point to asking her students how they were doing each week, inviting them to share their feelings and experiences, and how they had pivoted since COVID-19. “That was so helpful because people had so much to say, to talk about, to discuss. But we also needed to check on each other as a community of learners, how we were doing and how things were going for us, and talk about stories, about what we saw around, and I incorporated that into my classes. And students really liked that,” said Díaz de Sabatés.

Once her in-person classes resume, Díaz de Sabatés plans to take some of these learnings and apply them in the classroom. Specifically, she hopes to continue helping students open up and connect with their classmates. “I think that there is a lot of value into interacting with each other, especially with creative people at Columbia College, they will almost always be working in teams,” said Díaz de Sabatés.

In addition to her teaching duties, Díaz de Sabatés is the advisor for the master’s program in Gender Violence at the University of Mendoza in Argentina. She’s also working on “Artivism” and how art could be a vehicle for community activism and social change. This includes women-identified individuals who have worked to advance issues that are important for communities to thrive. Another project Díaz de Sabatés is working on is to highlight the life stories of trans women in her native country.

On advice for students, Díaz de Sabatés says, “never say never, because you never know where you're going to end up at, or with, and life is really full of possibilities.”