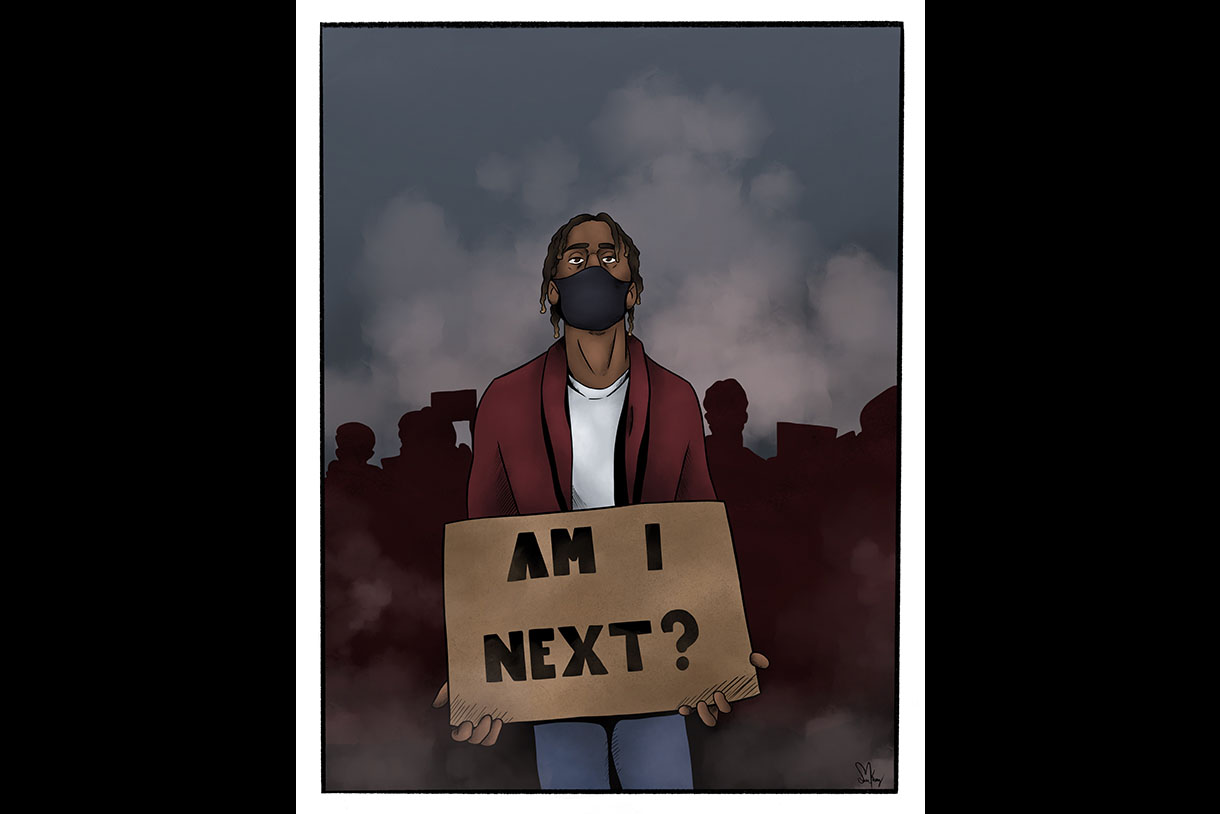 1st place: “Am I Next?" by Sarah Mitrache, Computer Animation ‘22
Winners of the 2021 Paula Pfeffer and Cheryl Johnson-Odim Political Cartoon Contest have been announced.

Winners of the 2021 Paula Pfeffer and Cheryl Johnson-Odim Political Cartoon Contest have been announced. Now in its 19th year, the contest offers Columbia College Chicago students the opportunity to make political and social statements, demonstrate their artistic skills, and showcase their analytical abilities.

This year’s submissions by Columbia students have reflected on current events and with themes focusing on racial and gender inequality, politics, and the COVID-19 pandemic.

“I thought these were some of the most poignant submissions I’ve ever seen,” said contest judge Ivan Brunetti, associate professor of illustration. “There has been so much at stake for our country, our planet, for the last year. A lot of tragedy. The cartoons came from a genuine and deep place, and you could feel the emotional and personal connection that the artists had for the issues they were depicting.”

Gabriela Díaz de Sabatés, who is an assistant professor of Humanities, History and Social Sciences, said the judges looked for clarity, complexity of ideas expressed, simplicity and effectiveness in this year’s cartoon submissions. The Theatre Department’s Assistant Professor Grace Overbeke added, “with a political cartoon, you're trying to say so much with an image, usually very few words, and so it can be difficult to convey a message that is clear and understandable and not so open to interpretation that the meaning gets lost. So, there were several cartoons that were beautifully illustrated, but ultimately the craftsmanship was not as important as the clarity of communication.”

Reflecting on the impact this year has had on the student artists’, Jim Rohn, associate professor of Interactive Arts and Media Associate Professor shared this observation, “Political cartoons are a visual representation of what students are really thinking about. This has been a very melancholy year. And so, it's always amazing how many different ways people can reflect that, it's a very powerful art form.” Isaiah Colbert thinks a good political cartoon “comforts the afflicted and afflicts the comfortable.” By that, he means a cartoon stands out in how it calls out events in an either exaggerated or blunt portrayal of events.

1st place: “Am I Next?" by Sarah Mitrache, Computer Animation ‘22 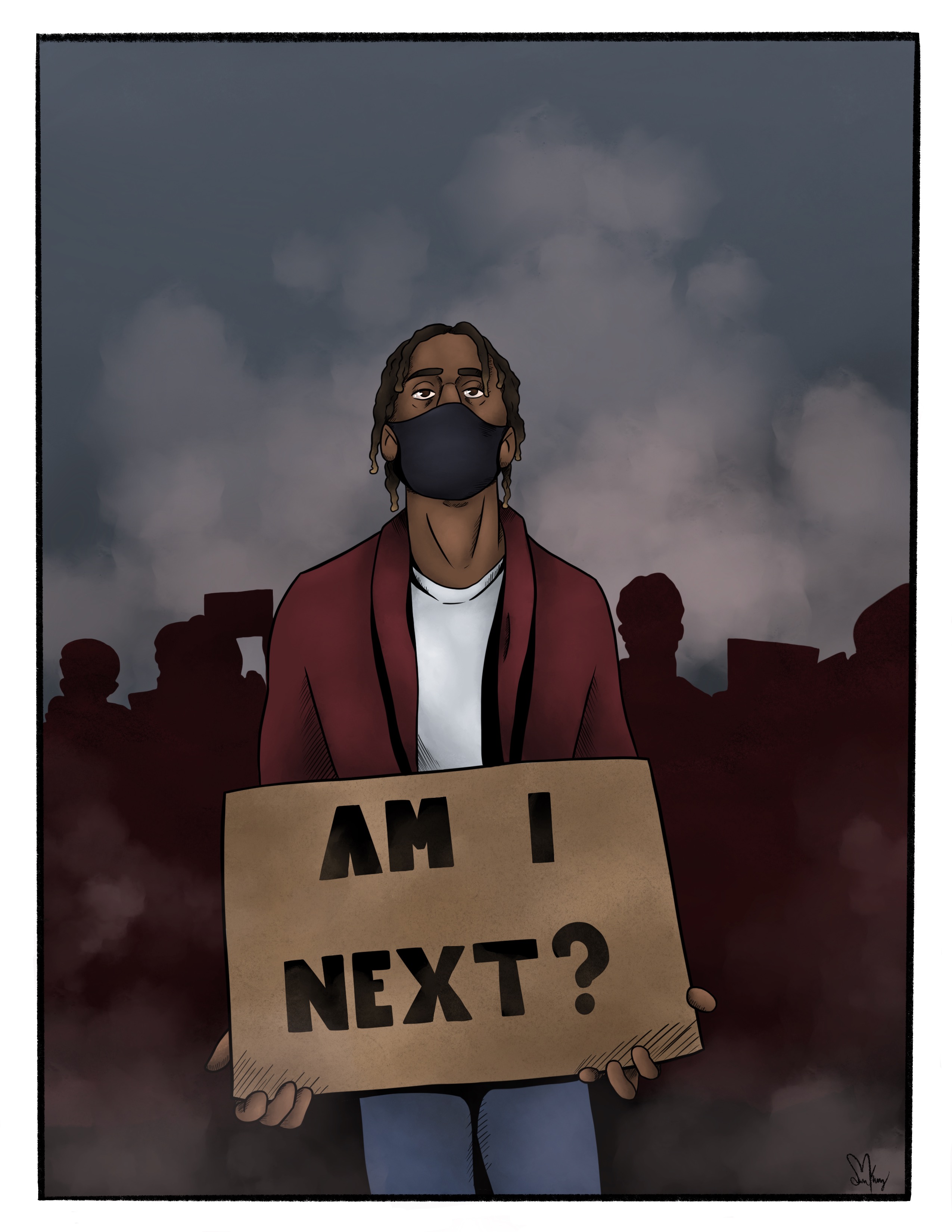 Sarah Mitrache has been trying to push herself, so she submitted a cartoon in this year’s Political Cartoon Contest to help her get name recognition as an artist. “It’s honestly so humbling to have been picked as one of the winners. I’m so happy that something I created invoked emotion and reaction enough that it caught the attention of its viewers,” said Mitrache.

Mitrache thinks a good political cartoon uses art to start a discussion about the hard issues. Political cartoons make the viewer see issues in a different light. Mitrache decided to create this cartoon as this past year has been hard for everyone but especially for people of color. “Seeing our world being consumed by police shootings, Asian hate crimes, and other acts of violence is hard when you're told to stay inside,” said Mitrache. Art helps her process what she’s feeling, and she thought it was important to try and draw it out. “I wanted my art piece to be a timestamp of what you might have seen during this time. Despite the pandemic, people banded together to voice the injustice seen in our country,” Mitrache added.

“I’m very humbled by this whole experience and love being able to contribute to Columbia’s community. I hope my experience gives other people the confidence to post their own art and not be afraid to let their work be shown,” Mitrache said, “I hope my art reminds people of what we can do when we come together and that there is still so much work to be done.” 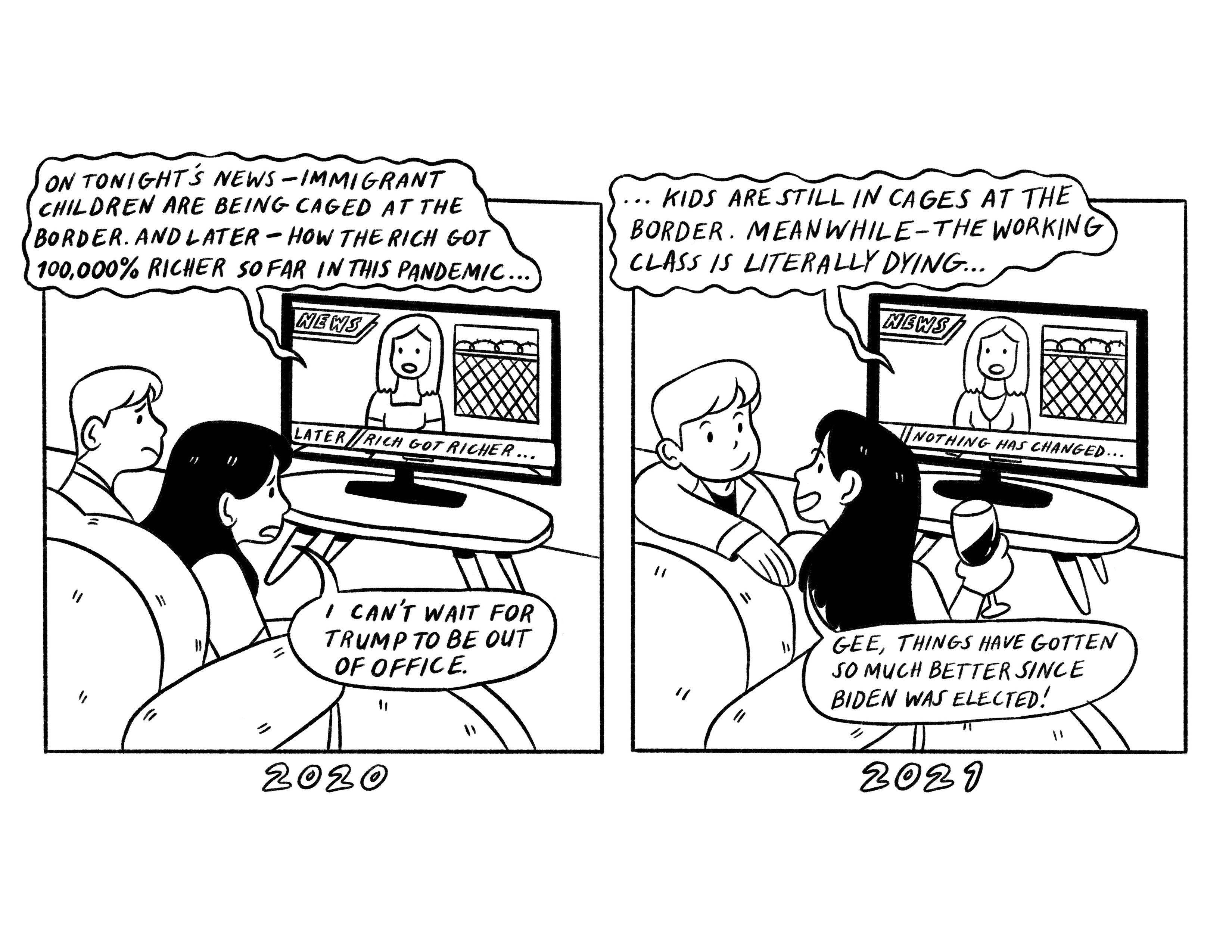 Alli Davis believes a good political cartoon is one that has an impact on the viewer. The topic of Davis’ cartoon is something that has caught her attention over the past few months. “It’s the idea that these really big issues have suddenly gotten better since Biden was elected when in fact, not much has really changed and people are just more comfortable with Trump out of office,” explained Davis, “It’s really only become more palatable and easier to ignore these issues. I think it’s really disheartening that the same issues regarding immigration policies or (lack of) pandemic relief haven’t really changed, but a lot of people have gone back to not talking about it anymore.” 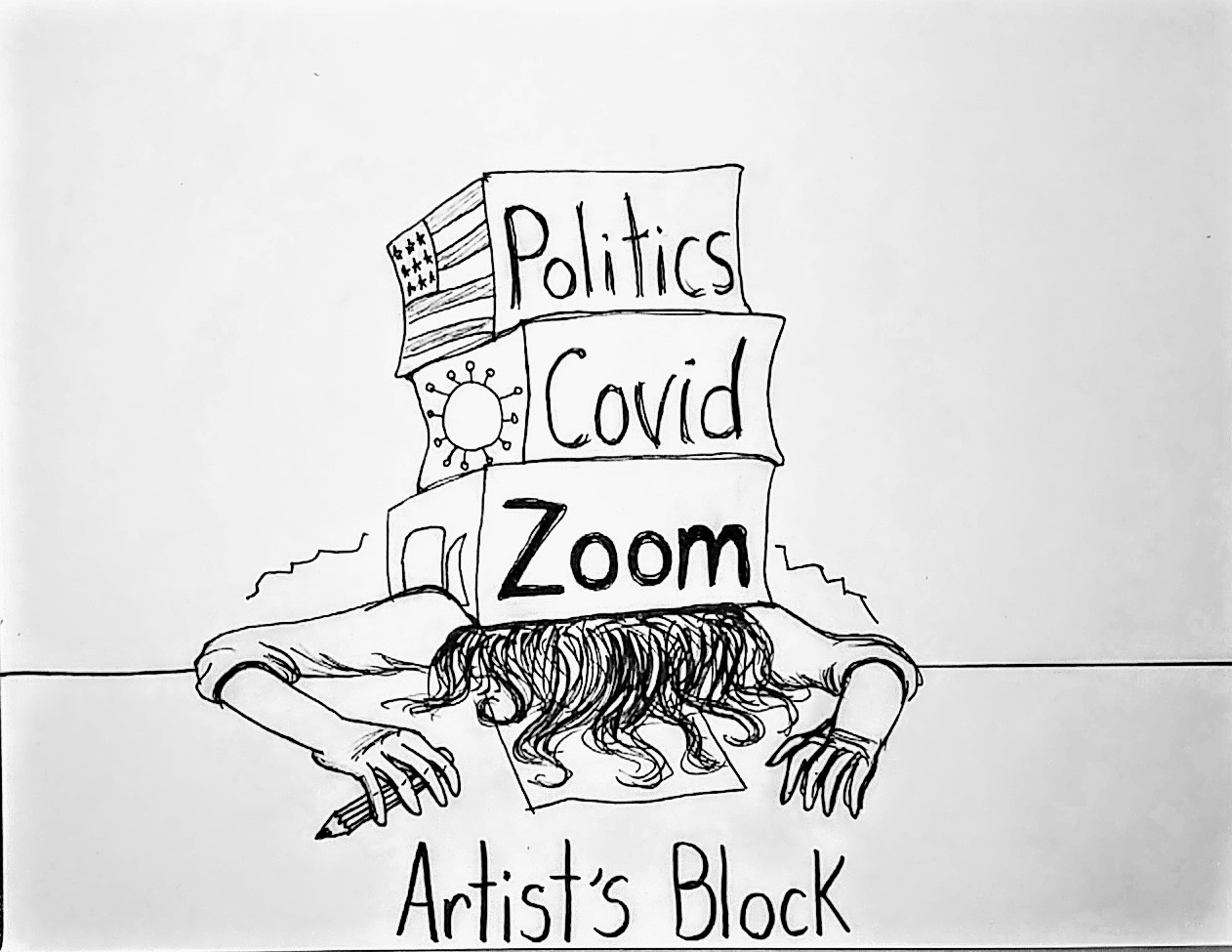 Jennifer Acevedo didn’t expect to place this year, but her topic is one that can be felt across campus. “When I was told to come up with potential concepts, I was stuck. I’ve never done a political cartoon before. Sure, there was plenty of material to work with, but it was overwhelming. To take all the news in along with balancing my online classes and ensuring my family and I stayed safe during the pandemic. I couldn’t think. That was when I decided that that ought to be an idea on its own,” said Acevedo.

“We all heard of the term ‘artist’s block’ and how much it messes with our productivity. I thought, ‘What if it was literal?’ The thought of actual blocks crushing my head was ridiculous, but it fit so well at the same time.” 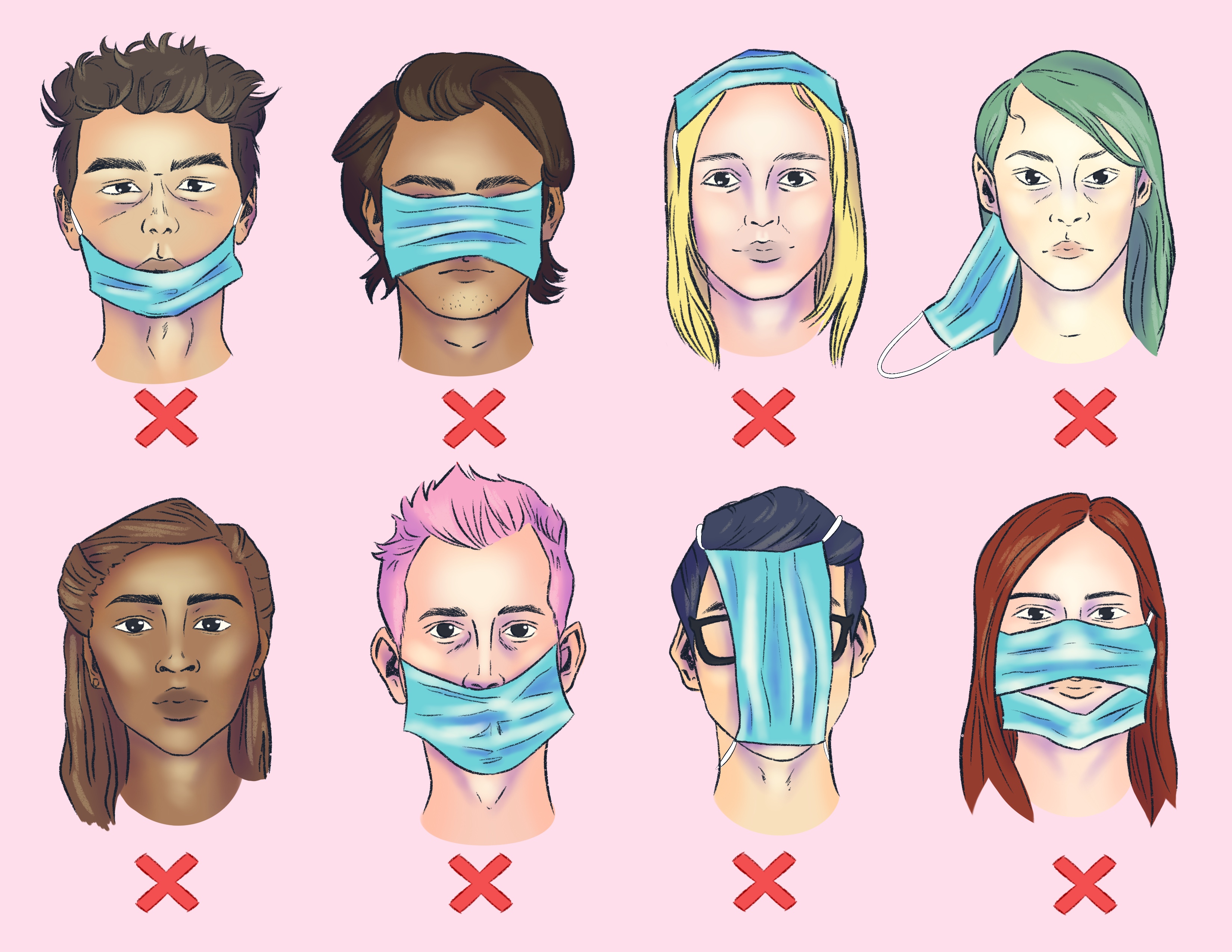 Samantha Caldera believes that comedy and relatability make a great political cartoon. Caldera said that part of the reason she placed is because she used a lot of color in her political cartoon. “The specific topic of how to properly wear your mask is just a product of the experiences I have every time I leave my house. The jokes really write themselves,” added Caldera.

Honorable Mention: "Black and White "When I grow Up" by Mac McGuire, Illustration Major, Animation Minor '24 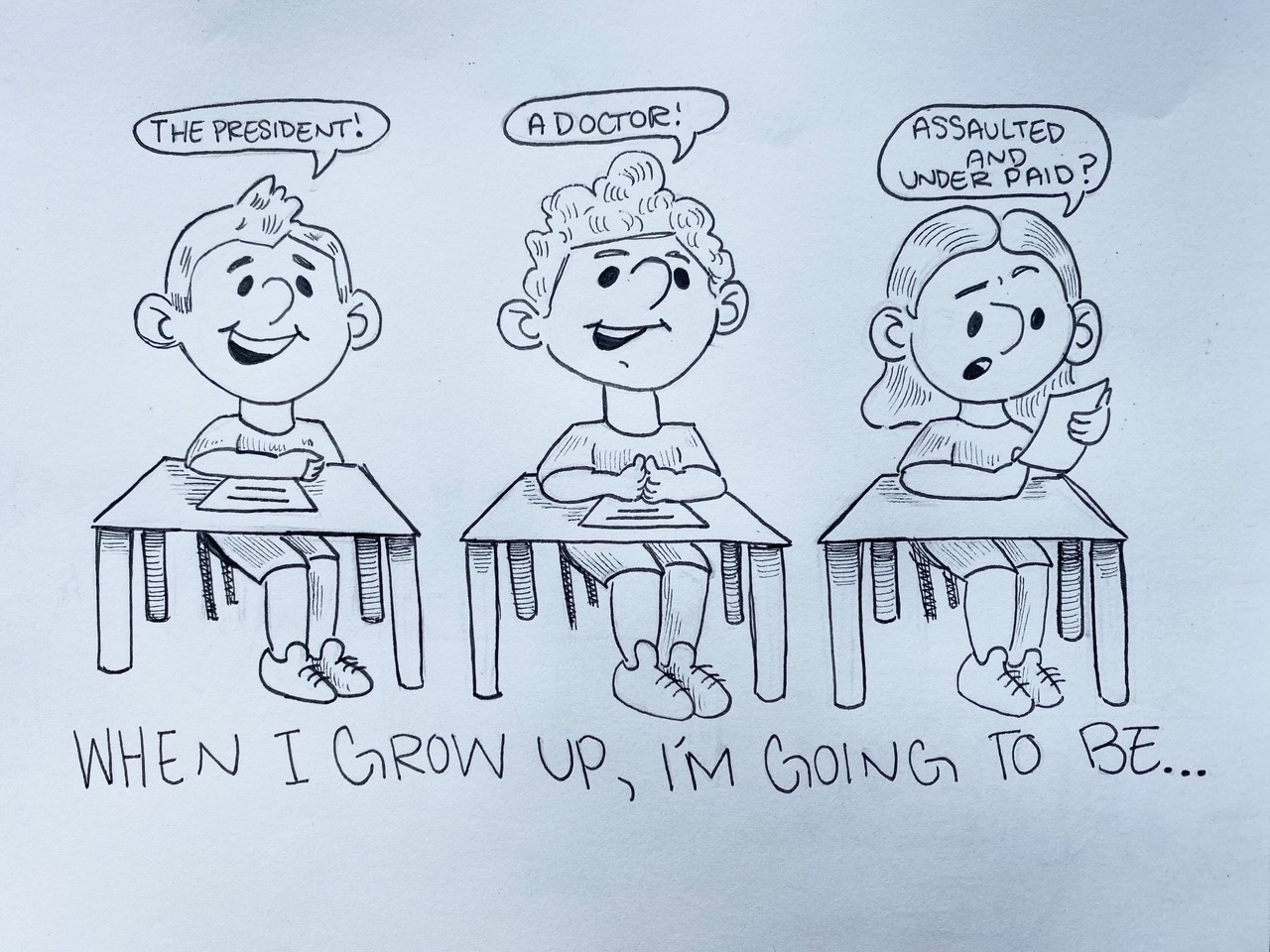 Mac McGuire is wrapping up her first year at Columbia and wants to make the most of her time here. “I feel like the best way to make sense of what’s happening in the world is to draw it out, so in no way was I going to miss a chance to do exactly that and potentially win a prize,” said McGuire.

McGuire believes a good political cartoon has something that hits home right away. McGuire’s process to create the cartoon was to make a list of everything that caught her eye, and then visualize what made that topic stand out to her. “The visual for my cartoon was based on the idea of wanting to explain a mature topic with childlike simplicity. There is so much unnecessary complexity to women’s issues and I wanted to see how I could break the topic down to its simplest form while also showing how bleak it can be for a young girl knowing what will most likely occur in her future,” said McGuire.