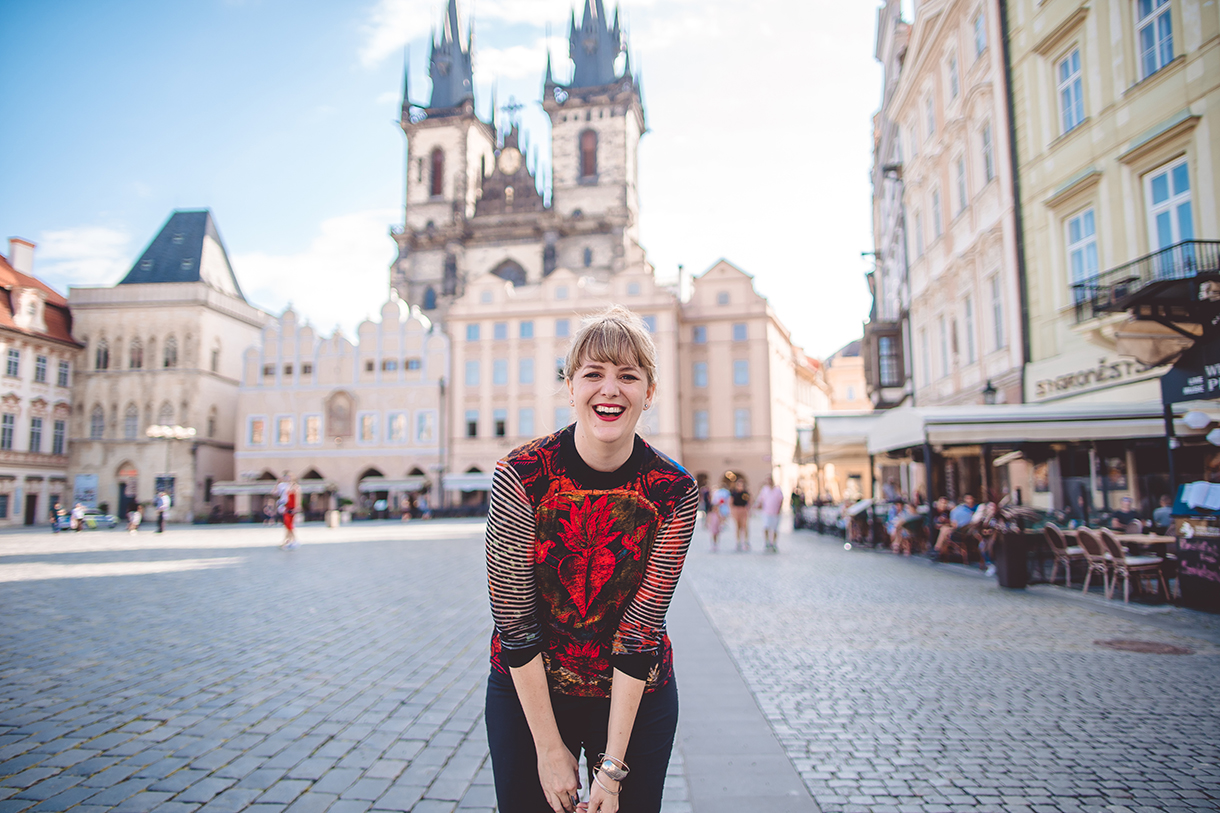 Laura Hawbaker spent several years traveling and living around the world, writing, teaching, and tutoring, and received a master’s degree in linguistics. After a while, Hawbaker realized she wasn’t being as creative as she would like, so she decided to attend Columbia College Chicago’s Creative Writing MFA program.

In fourth grade, Laura Hawbaker, MFA ’23, sat cross-legged in the library surrounded by her classmates. A teacher read a short story Hawbaker wrote that had won a Young Authors award. She was so embarrassed to hear her work being read aloud and in front of her friends. Her face turned red. She stared at the floor. She couldn’t wait for it to be over. But at the end of the story, everyone—teachers and students alike—stood and applauded. For the first time, nine-year-old Hawbaker realized people outside her family enjoyed her writing. “I had stories people wanted to hear. Getting that kind of encouragement at a very young age doomed me,” says Hawbaker.

Hawbaker understood that to write great stories, she needed to live an interesting life. “In my early twenties, I was writing full novels that were going to be trilogies. I had these big ideas, but I didn't have a lot of life experience yet to fill the pages.”

Born and raised in the Midwest, Hawbaker has spent the past several years traveling and living around the world: Prague, Poland, Hawaii, New Orleans... She got by with jobs as a freelance journalist, teacher, and tutor. She received a Master’s in Linguistics and taught English to international students.

After a while, Hawbaker realized she’d gone astray from her childhood dream. She wanted to tell stories, but she wasn’t being as creative as she’d like to be. So she applied for and was accepted to the 2019 Iowa Writers’ Workshop’s 8-week summer program, which inspired her to join Columbia College Chicago’s Creative Writing MFA.

Hawbaker is using her experiences from abroad to inform her work now. She’s currently working on a novel-in-stories called 25 Roommates. Because she moved around so much, Hawbaker has had 25 roommates in her life and draws upon this real-life experience to inform her fictional work. “What is it about roommates? They’re these temporary relationships that last only as long as the lease, but they stick with you. Even the bad ones—especially the bad ones,” she says. “25 Roommates is about a character who goes and lives in a bunch of crazy places and accumulates a ton of roommates over that time period.”

Hawbaker plans to finish the story collection this fall before shifting her attention to her thesis work. She plans to graduate the MFA program with two manuscripts instead of one.

Hawbaker has also launched a publication, MASKS Literary Magazine. She was the 2020-2021 Artist-in-Residence at the Library’s Aesthetics of Research Program. As part of her residency, Hawbaker needed to complete a project, so she curated a mask-themed exhibit and founded its accompanying publication, MASKS. She recruited her MFA cohorts to share mask-related stories in its pages. The first issue received funding, was printed, and published. Now, Hawbaker has turned her attention to a second issue. Working with a larger team of Columbia MFA candidates and alumni, Hawbaker opened submissions to the public. The second issue of MASKS will be released this November.

Hawbaker isn’t letting her new literary journal or short story collection get in the way of her other work. Last summer, Hawbaker won two awards. Her short story, "When the Water Comes" (her final for Sam Weller's Ray Bradbury Seminar), won The Tusculum Review's 2021 Fiction Prize. Drawing upon her own experiences and life in New Orleans, the story centers on climate change and the flooding that is affecting the bayous of Louisiana. Judge Amy Sturgis had this to say about the story: “‘When the Water Comes’ offers a haunting portrait of a town and people drowned by the bayou. With expressive, elegiac prose, Hawbaker invites us to consider what is lost and swept away, what we sacrifice holding on to what we must inevitably release, and what forms our lasting and last hopes may take. It is an elegant achievement.”

The award includes publication in an upcoming issue of The Tusculum Review, a limited-edition chapbook, an invitation to read, speak, and do a Q&A at Tusculum University, and a $1,000 prize.

Last summer, Hawbaker was also awarded the Franz Kafka Fellowship; she was invited to attend the Prague Summer Program at the University of Creative Communication in the Czech Republic. Awarded to a writer of promise, the fellowship provided full tuition to the four-week intensive writing workshop in Prague. There, Hawbaker learned from authors like Richard Katrovas, Mark Slouka, and Stuart Dybek. She spent a month working alongside a cohort of international writers and attended lectures on Czech literature, translation, and history.

Hawbaker has some advice for aspiring writers. She says, “It’s more important to go off and do crazy stuff than write a book when you're 21. Move to another country you've never visited—where you have no money and just wing it—or get arrested at a protest, or get fired a couple of times, or get your heart broken a bunch of times. It's terrible, terrible life advice… but it's really good writing advice.”