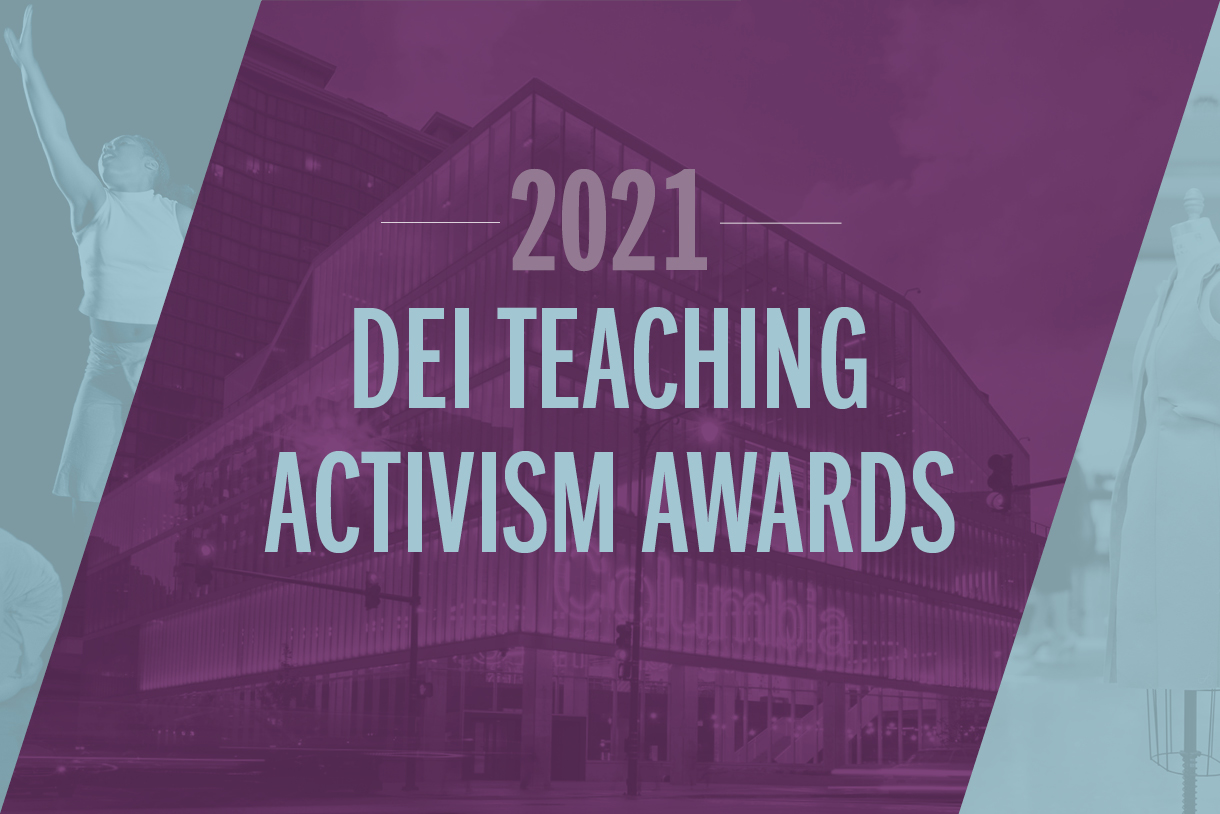 In November 2020, Columbia College Chicago’s Office of the Provost launched the Diversity, Equity, and Inclusion (DEI) Teaching Activism Awards with a call for nominations. The DEI Teaching Activism Awards are presented annually to one department and one faculty member for their achievement in transforming curricula and/or teaching practices with respect to diversity, equity, and inclusion. The award honors those who display innovation in terms of course or curricular structure, instructional form, and/or content that encourages student activism, engagement, and understanding of antiracist practices.

One of the main focuses of Columbia’s Academic DEI is to enrich curriculum in order to challenge traditional cultural and artistic traditions, which often lack diverse narratives. “I believe there is ample evidence of how many creative industries have failed to integrate DEI into practice,” says David. “The fact that diverse ethnic and gender and gender identity perspectives are still struggling to find voice in the most rarified spheres of creative influence is telling. I am confident that our students will broaden the discourse and enrich the creative spaces they enter.”

Lisa Gonzales, Chair of Columbia’s Dance Department believes that DEI in the classroom “has an impact beyond the classroom because we’ve watched alums go on to be leaders in the professional dance community as community organizers, who are employing equitable and anti-racist processes in conversations, choreography, and their own teaching and continued learning.”

The Dance Department and its faculty have been engaged in transforming their curriculum over the last decade and continue to demonstrate a commitment to moving towards DEI transformed instruction in dance studies, technique, and creative processes including having established the shared relevance of modern and hip-hop dance by putting the same emphasis on West African dance that has been traditionally put on dance techniques such as ballet.

“It’s clear that when students are working in a pluralistic curriculum their perspectives broaden—and not only does this make capable and versatile artists but it also serves our collective work as a department, which values art making at a high level in relationship to DEI and anti-racist values,” says Gonzales. “We want them to have a strong sense of their own value as an artist citizen within their communities and the larger world. I believe we see a future where we won’t be calling a focus on multiple viewpoints, and plural dance practices—and their accompanying cultural values—as DEI, but that this work will be so woven into the fabric of the curriculum and culture of the department that it is inseparable from our understanding of dance.”

Melissa Gamble, who won the Faculty DEI Teaching Activism Award, has been with Columbia’s Fashion Studies Department since 2010 and teaches courses such as Trendspotting, Law for Creatives: Fashion, and Professional Practice. Her instructional areas include critical race theory and anti-racism practice for White educators as well as experiential learning and professional development.

According to a November 2020 Forbes article focusing on the lack of diversity in fashion, less than 1 percent of products stocked by most retailers are from Black-owned businesses. And although there has been a steady increase in model diversity over the last few years, at major fashion houses such as Burberry—which has over 10,000 employees—leadership, board members, and employees remain predominantly White.

“In order for the fashion industry to change, the standards have to change. Working with students to reimagine those standards in the classroom is a starting point,” says Gamble. “Teaching students to think critically about their work, the work of others, begin identifying biases within themselves, and articulate these things in constructive ways is another important piece. Students need to be prepared for the realities of the workplace. Change is slow, but it won't happen unless we empower ourselves and our students with the tools needed to make it happen.”

David says she was impressed by the transformative diversity, equity, and inclusion commitments contained in the 2015-2020 strategic plan, Achieving our Greatness, when she came to Columbia College Chicago in 2019. “As I learned more about the programming underway, I very much appreciated how faculty members and academic staff embraced the DEI curricular innovation goals, and I wanted to recognize and support that work," she says. "An important step has been to encourage faculty members to speak about their DEI work in their annual activity reports. In addition, I wanted to recognize faculty achievement in two ways: as individual faculty, and the broader curricular assessment and redesign work being undertaken on a departmental level. Importantly, the departmental award is intended to provide support for departments to engage in campus programming, which will them to share their expertise with others in the Columbia community.”