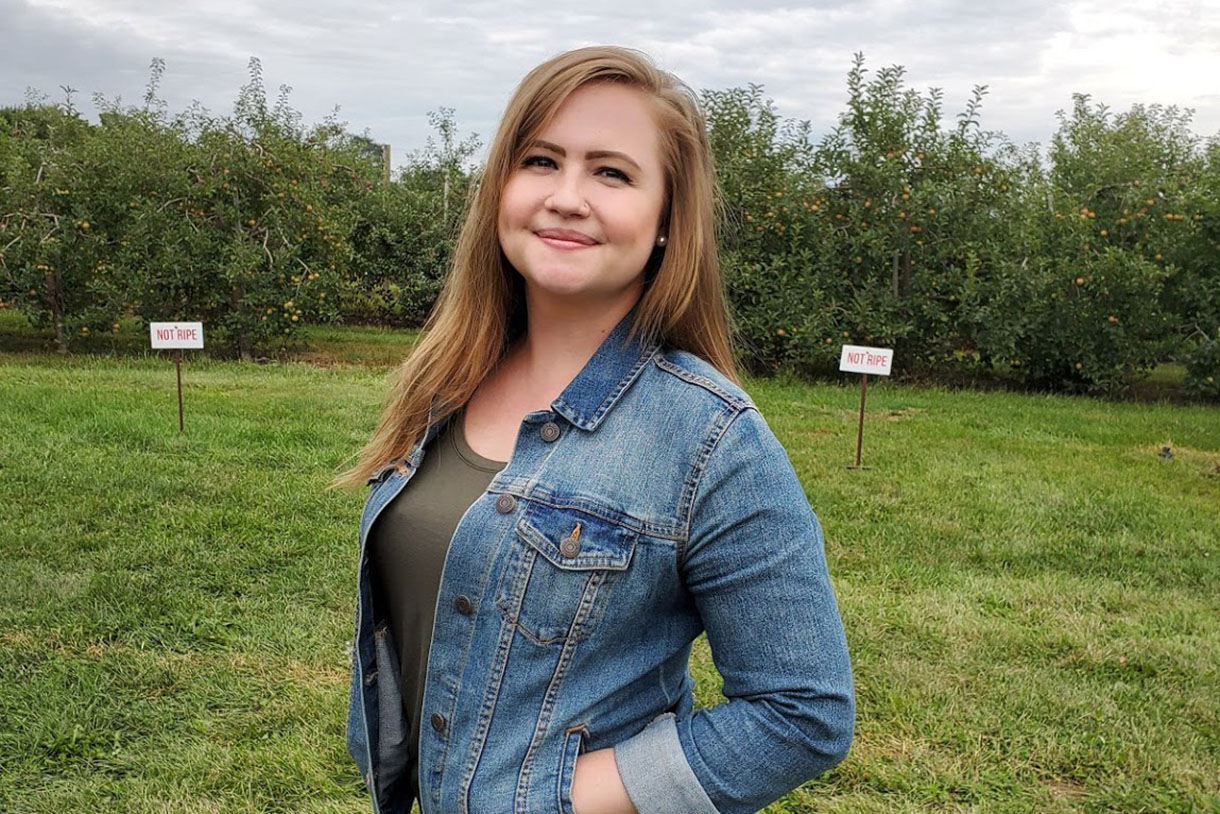 Sarah Uhlarik didn’t always know she wanted to be a graphic designer. Uhlarik received her first degree from the Culinary Institute of America in Baking & Pastry Arts. Following graduation, she worked at a catering business and quickly realized that she didn’t want to work in a kitchen setting long term. Uhlarik thought about her favorite part of catering, which was working on designing plated desserts, cake decorating and event design. With this realization, she decided to combine her passions and enrolled in classes at the local community college.

One of the first classes Uhlarik took at Grand Rapids Community College was a photography class so she could learn more about food photography and styling. Her professor was Juan Fernandez BFA Photography ’10, who introduced himself as a Columbia College alumnus. Uhlarik had never heard of Columbia and after that class, she went home and researched the College to learn more. While clicking around on the website, Uhlarik realized that day happened to be the deadline to apply for early applications. So, she got her application together and applied that night! “I was most excited about the many different design programs and was initially interested in Advertising Art Direction. After doing some more research I settled on Graphic Design with an emphasis on Publication Design,” said Uhlarik. She was accepted and graduated with a BA in Graphic Design in Fall 2017.

Following her Columbia graduation, Uhlarik was hired on as a graphic designer at PeopleScout. It wasn’t long until she became interested in user experience (UX)/ user interface (UI). Uhlarik began trying to learn UX/UI on her own by watching videos on LinkedIn Learning, reading articles and teaching herself different programs like Adobe XD and InVision. But she had trouble teaching herself as she didn’t know exactly what she needed to learn in order to be successful. So Uhlarik began researching programs that would accelerate her learning. “In my research I came across the portfolio of a woman who went to grad school in Chicago, so I did another Google search. Low and behold a result for Columbia College showed up advertising its Interaction Design MA program. I was just as excited as the first time I found Columbia, and after reviewing the course requirements I was sold,” said Uhlarik. She applied and was once again accepted. She’s a part-time graduate student and plans to graduate with an Interaction Design MA degree with a concentration in interfaces and applications in summer 2022.

Uhlarik’s coursework is also getting noticed. This semester she is taking an Information Architecture course, taught by Assistant Professor Lauren Liss ‘04. Liss has assigned students to write articles and publish them on medium.com. Liss has provided the prompts based on the subject matter covered in the course. Uhlarik has written each of these articles by creating an outline, a peer-reviewed first draft, completing any necessary revisions, and then publishing to her Medium account. A day after posting her second article on taxonomies, she received an email saying a comment was left on her article by Fabricio Teixeira the founder of UX Collective, a well-known industry publication site on Medium. Uhlarik was shocked. Teixeira applauded the story and asked if Uhlarik would be interested in publishing her content on UX Collective to reach a wider audience. She was, and her story is now published on UX Collective: https://uxdesign.cc/how-taxonomies-in-the-physical-world-can-inform-ux-decisions-99b0aa7cd17e.

To help Uhlarik get inspiration for her work, she relies heavily on visuals. She references Google, Pinterest, Behance and Shutterstock. “I’ll look at existing work and see what I like then pull elements from different places. I also follow a lot of design-related accounts on Instagram. Some of my favorites are @uxswipe, @interfacely, @invisionapp. I also love to read articles on Medium and Interaction Design Foundation,” shared Uhlarik.

Once she graduates, Uhlarik is most excited to have more free time to work on personal projects. She already has a few project ideas, including getting back into food photography and styling.